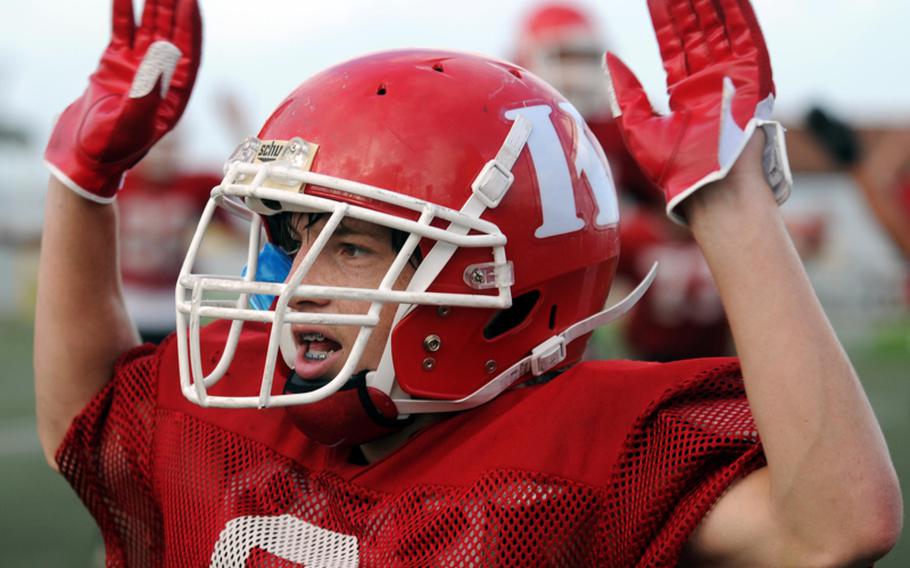 Fifth in a series of high school football previews.

YOKOSUKA NAVAL BASE, Japan &ndash; There&rsquo;s no shortage of solid, experience skill-position players in Nile C. Kinnick football team&rsquo;s lineup. The $50 million question, however, looms in the trenches, where the Red Devils sport plenty of size, but much youth and inexperience.&ldquo;The line's a work in progress,&rdquo; second-year Devils coach Dan Joley said Thursday, a day before Friday's DODDS Japan and Kanto Plain Association of Secondary Schools season opener at defending Far East Division II runner-up Zama American.It may take some time, Joley said, and the Devils may take a lump or two early. But he does see the potential for special things to happen once the team&rsquo;s engines &ndash; a veer-option offense and 4-3 defense &ndash; turn smoothly.&ldquo;I&rsquo;m excited about the kids we have,&rdquo; Joley said.Quarterback Quinton Holden, who took over under center late last season, is &ldquo;smart, fast and confident,&rdquo; Joley said. Returning All-Kanto running back Dustin Kimbrell &ldquo;may be one of the top five athletes out there.&rdquo;It took about half of last season before Kimbrell and the rest of the Devils caught onto the veer option.&ldquo;Once he (Kimbrell) saw what we were doing &hellip; he was dynamite and it clicked for everyone,&rdquo; Joley said. &ldquo;We worked on it during spring football, and worked on it all summer, so when two-a-days began (on Aug. 8), they already knew the offense.&rdquo;Many of the same skill players on offense will line up at safety, cornerback and linebacker on defense.And Kinnick has a true kicking game &ndash; senior Marcus Boehler, who for three years ran cross country for the Red Devils, has taken his soccer skills to the punting and placekicking game, and is also a fleet receiver and &ldquo;hard-hitting&rdquo; defensive back.&ldquo;It&rsquo;s the interior that worries me,&rdquo; Joley said.The one silver lining, he said, is that many of the linemen come from a junior varsity team that went unbeaten in 2010. Joley said he was &ldquo;excited&rdquo; about their potential to grow into what he hopes becomes a &ldquo;winning tradition&rdquo; at Yokosuka.Kinnick hasn&rsquo;t won a Kanto Plain title since 1998, and has never won a DODDS Japan nor a Far East Division I championship.The Red Devils play their two games against its Japan Division I opposition, Yokota, in September to determine the top two D-I teams.The second-place team hosts Seoul American in a Far East play-in game on Oct. 3; the winner plays in a semifinal at Okinawa&rsquo;s top Division I team on Oct. 29. Japan&rsquo;s top D-I team hosts the Oct.3 Guam High-Okinawa No. 2 winner in the other semifinal on Oct. 29, with the semifinal winners to play Nov. 12.ornauerd@pstripes.osd.mil