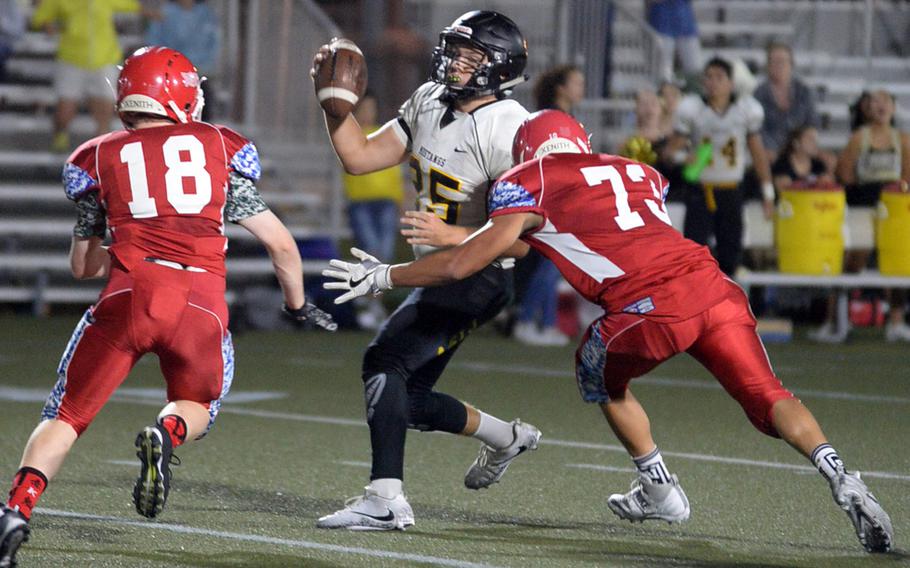 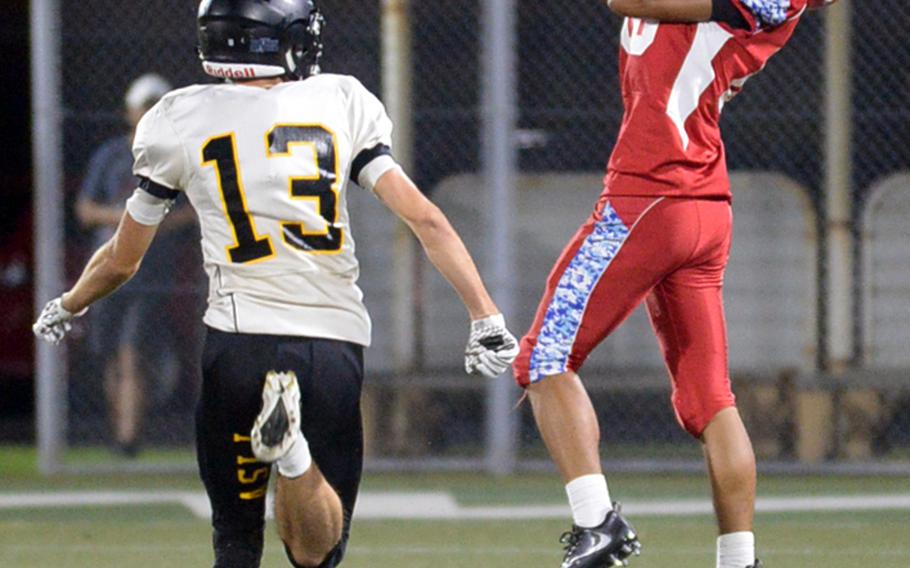 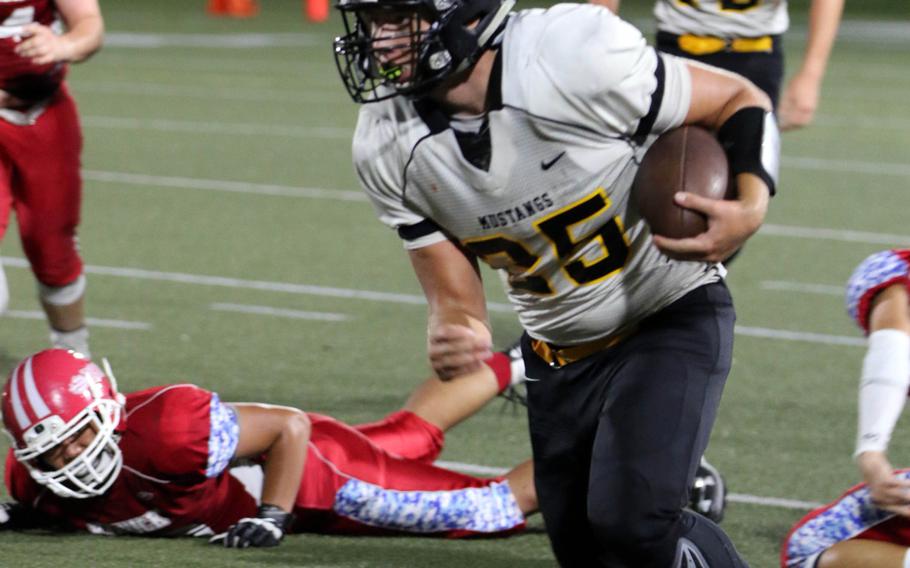 American School In Japan junior quarterback Oliver Rogers threw for two touchdowns, was 21-for-41 for 197 yards passing and ran for 54 yards on 13 attempts. (Isaiah Brown/Special to Stripes) 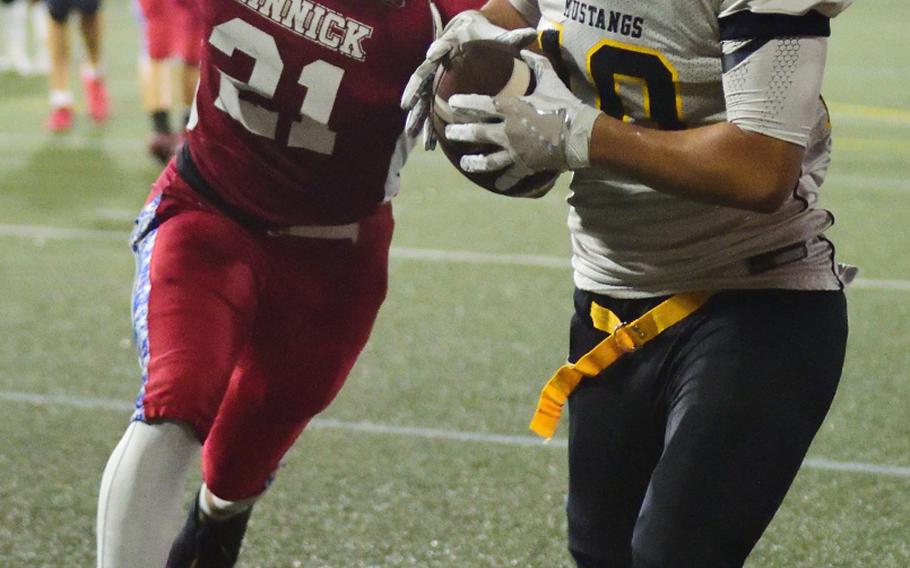 Jake Noddin steps into the end zone in front of Nile C. Kinnick's Bryan Hunt with one of two American School In Japan touchdown passes. (Jimmy Mills/Special to Stripes) 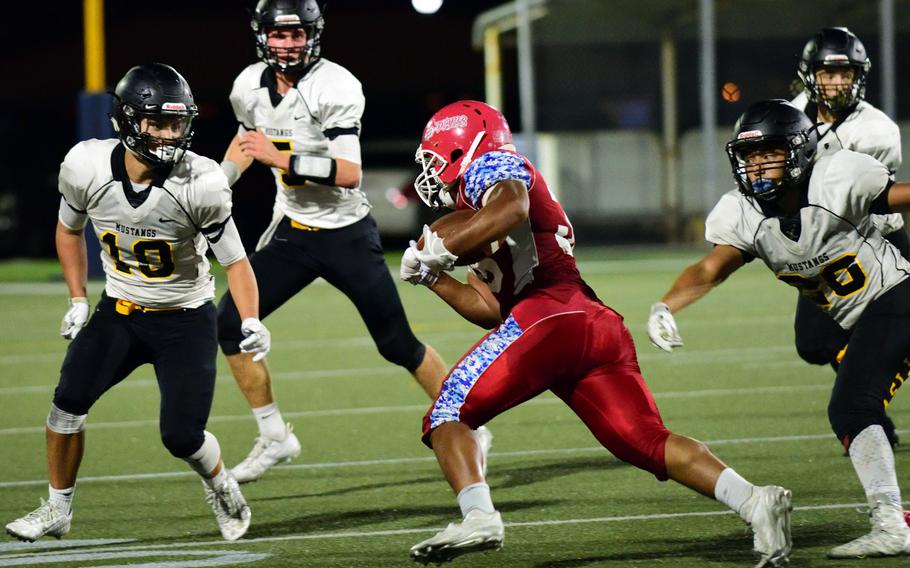 But it was the play of the line, led by juniors Jacob Loffreda and Connor Joley, that played the biggest role, coach Dan Joley said, in Nile C. Kinnick’s 32-12 romp Friday over American School In Japan.

With the win, the Red Devils improved to 3-0 overall and 2-0 in Division I, having outscored opponents 99-12. It was the first defeat for the defending Far East D-I champion Mustangs in two games this season; the last team to beat ASIJ was Kinnick 29-22 last Oct. 1.

“That was the most dominant performance out of the line that I’ve seen in years,” Joley said. “We’re well-balanced in the line. When we commit to running, we were blowing them out on both sides. Between Jacob and Connor, we hitched it up behind them and went at it.”

Walker did it with both his legs and his arm. The senior accounted for 166 yards total offense, rushing 11 times for 104 yards and a touchdown and throwing 62 yards for his only completion to Chris Watson for a TD.

Cheng ran nine times for 133 yards, including a 58-yard scoring run untouched on a third-quarter burst up the middle. Peterson added 77 yards and a pair of touchdowns on 11 tries.

While the Mustangs were effective through the air, throwing for 197 yards and scoring twice on passes, the Red Devils contained ASIJ’s running game, holding the Mustangs to 113 yards on 36 attempts. Kinnick recorded three sacks, 1½ by Kameron Leon Guerrero.

Unlike last week’s 34-10 win at Yokota when the Mustangs rallied from deficits of 7-0 and 10-7, ASIJ fell behind early and was unable to answer. The Mustangs came up empty on two trips to the red zone in the first half and twice more into Kinnick territory in the second half.

Junior Oliver Rogers split time under center with incumbent senior quarterback Jack Ambrosino. Rogers was 21-for-41 for 197 yards, including scoring passes of 4 yards to Ambrosino and 16 to Jake Noddin.

Ambrosino finished with 85 yards on seven catches and Noddin 42 on four catches. Noddin also had a fumble recovery and Rogers an interception.

“They beat us up front,” ASIJ coach Roy Tomlinson said. “They beat us in every facet of the game. We were outgunned. But we didn’t give up.”

ASIJ next hosts Kadena in a rematch of last year’s Far East D-I final, won by the Mustangs 35-18.

Kinnick travels to Kubasaki for a game next Saturday; the Red Devils opened the season by blanking the Dragons 34-0 on Aug. 25.