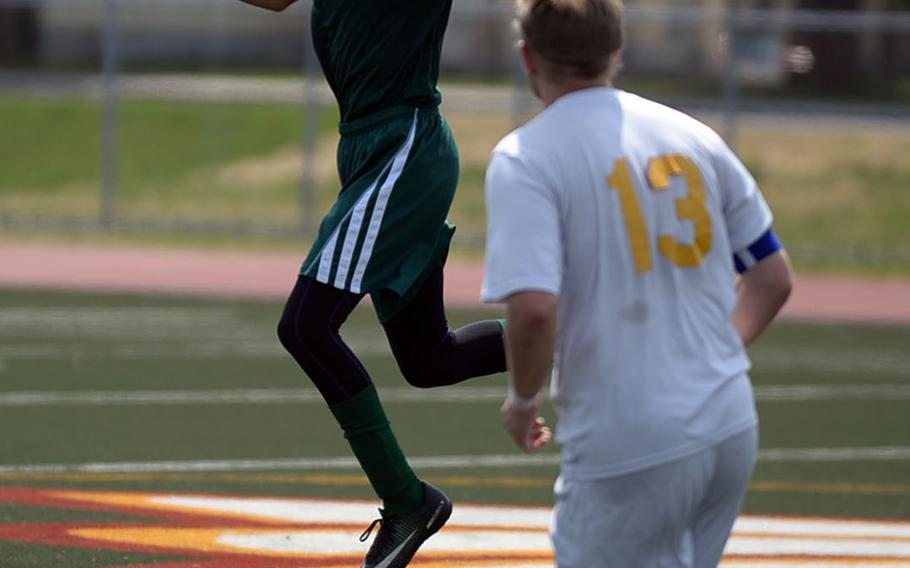 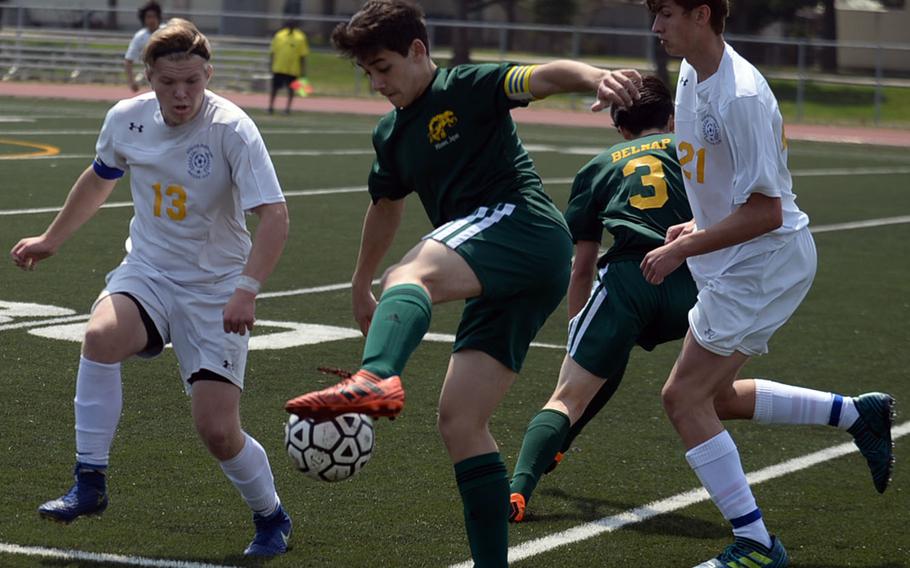 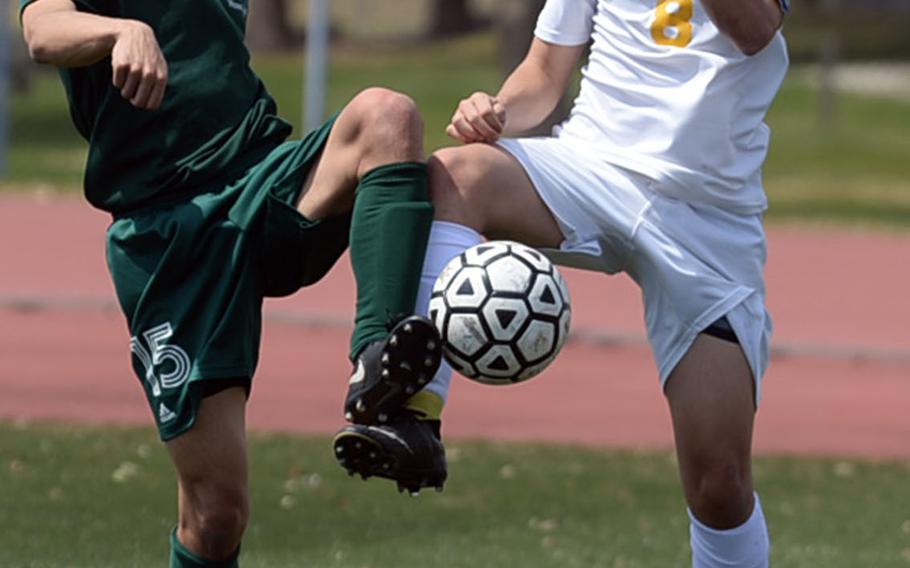 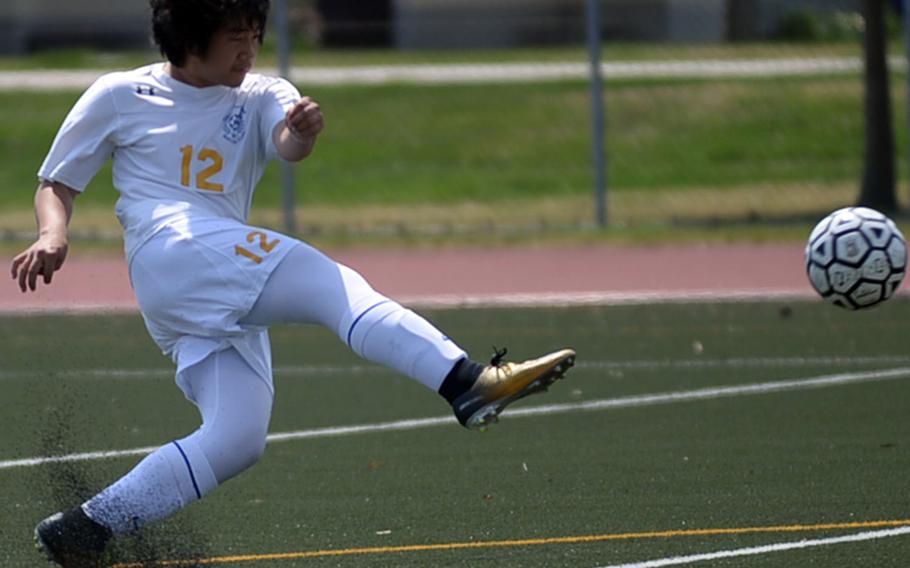 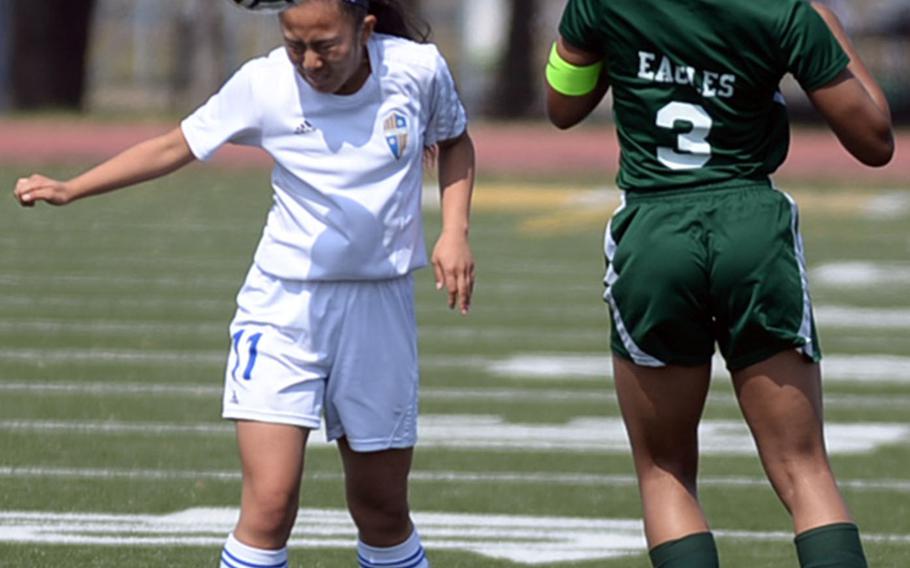 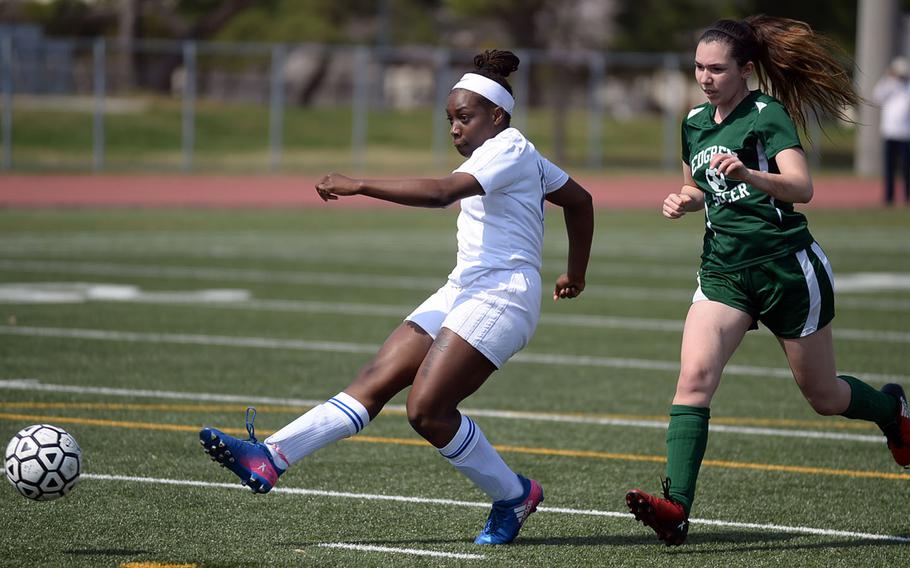 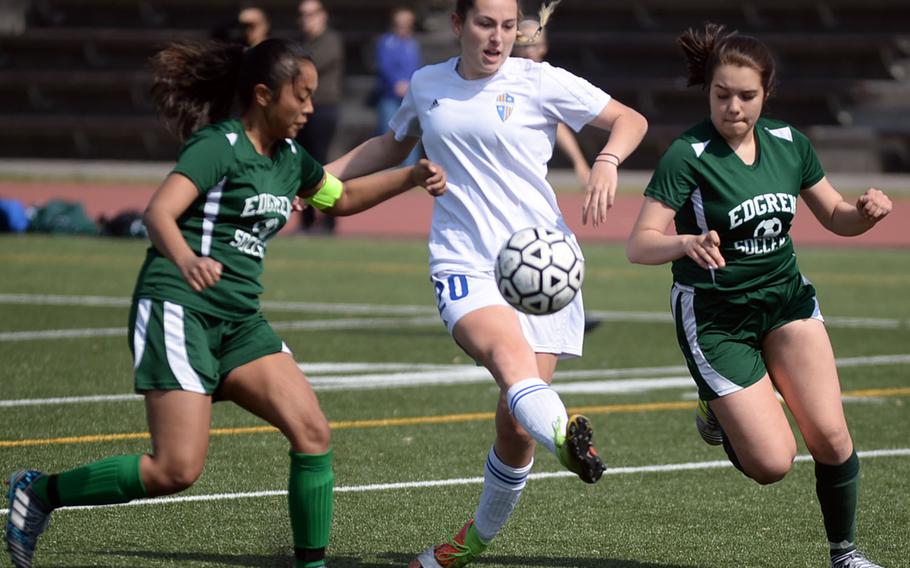 TOKYO – Just when all seemed lost for Kadena’s girl strikers and the Panthers needed the biggest of plays to spark a comeback in the final, one of Kadena’s smallest players came up big.

Korina Macato, all of 5-foot-1, took a feed from midfielder Pam Barrett and got the equalizer with just under three minutes left. Then Kadena’s leading scorer, Adrianna Gomez, notched her 31st off a scramble in front following a corner kick with 44 seconds left.

That gave Kadena a 3-2 win over the host team Saturday in the American School In Japan girls soccer festival, the first time the Panthers have won the only in-season northwest Pacific invitational featuring DODEA Pacific teams.

“This group needed to be stretched, and this match stretched them as far as they could go. We had to play that one all the way to the end,” Panthers coach Abe Summers said after Kadena improved to a DODEA Pacific-best 19-0 on the season.

The ASIJ soccer festival, in its fifth year, has regularly welcomed Kadena and Kubasaki of Okinawa, the most decorated programs in Far East Division I Tournament history.

Kadena steamrolled its way into the final, winning its first four matches by shutout, including the quarterfinal 5-0 over Yokohama and the semifinal 4-0 over Christian Academy Japan. But the host Mustangs pushed the Panthers right up to the final whistle.

Ava Vander Louw, a freshman transfer from Minnesota, scored both Mustangs goals, including one that gave ASIJ a 2-1 lead scant seconds into the second half. Vander Louw’s first goal came four minutes in; Macato got the equalizer seven minutes later.

Macato, called “Koko” by her teammates, said the Panthers gained some valuable takeaways from the tournament: “We should always stay calm, keep our heads up and trust each other,” said Macato, who has 16 goals this season, tied for second-most on the team with Phoebe Bills.

The team gained some valuable time to bond during the three-day trip, Macato said. “We all got to know each other a little better,” she said, adding that the Panthers at first were a bit wary of how wide the field was. “But everybody covered and trusted each other.”

Yokota girls strikers also remain unbeatenMISAWA AIR BASE, Japan – Normally, Emily Taynton is on the field to prevent other teams from scoring. But on Saturday against Robert D. Edgren, Yokota’s keeper got a chance to play up front – and made the most of her chance, scoring her second goal of the season.

That helped the Panthers remain the only other unbeaten DODEA-Pacific girls soccer team, at 17-0, as they romped 8-0 over Robert D. Edgren, completing a weekend sweep. They beat the Eagles 4-0 on Friday.

Caleigh Garcia netted four goals, giving her a team-high 24 for the season, plus two assists. Bailey scored her 10th goal of the season and freshman Sarah Schultz scored her ninth.

Track stars closing in on northwest Pacific record territoryCAMP HUMPHREYS, South Korea – With a jump of 1.96 meters on Saturday, Humphreys junior Quintin Metcalf came close to a northwest Pacific high-jump record during the last Korea regular-season track and field meet before the district finals next week.

Metcalf was shy by just .04 meters the region record of 2.0066, or 6 feet, 7½ inches, set in 2011 by Kadena’s Lotty Smith during the second Far East meet. Metcalf has two more chances to beat the record, next Saturday’s Korea district finals and next month’s Far East at Yokota.

Metcalf also won the 110 hurdles and the 800, helping the Blackhawks come out ahead in the team standings for both boys and girls in the meet. The boys had 166½ points and the girls 180.

So the Samurai coach called a closed-door team meeting, at which he said it was time to make the push toward May and the Far East tournament, which the Samurai are hosting, “and I ‘encouraged’ every single player to join me.”

The result – Perry broke out the bats and supported starter and winner Garrett Macias, the coach’s son, with five times the run support of Friday. Perry split the series with a 20-2 win over the Trojans.

Humphreys girls split the weekendCAMP HUMPHREYS, South Korea – The good news – the Humphreys girls soccer team got the season sweep over arch-rival Osan that they wanted, rallying past the Cougars in the second half for a 3-2 win. Arielle Stickar had all three goals for the Blackhawks.

The bad news – less than 15 hours later, Humphreys dropped a 2-1 loss at Yongsan despite Stickar getting her 10th goal of the season.

That meant the Blackhawks need to win Monday’s makeup home match against Seoul American to finish second in the Korea Blue division and earn the second seed in the league’s postseason tournament, which starts Wednesday at Daegu.