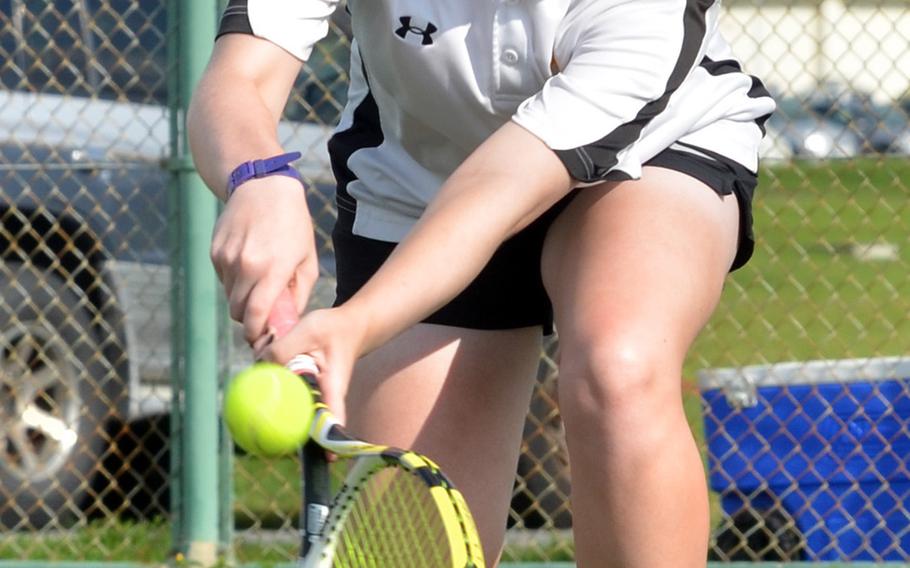 Kadena freshman tennis player Lily Oliver dropped just five games in seven singles matches and only lost more than two doubles games in two matches, including her only loss of the season. (Dave Ornauer/Stars and Stripes)

Kadena freshman tennis player Lily Oliver dropped just five games in seven singles matches and only lost more than two doubles games in two matches, including her only loss of the season. (Dave Ornauer/Stars and Stripes) 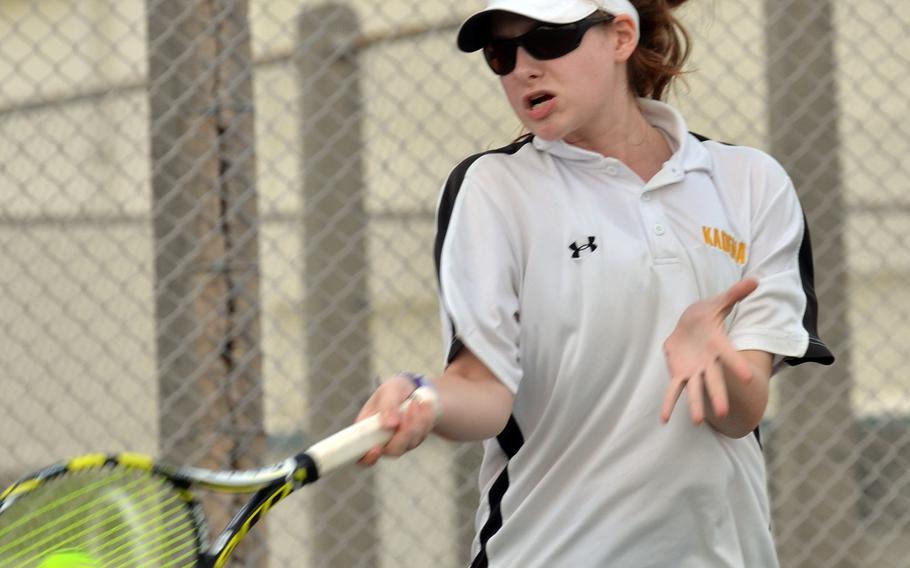 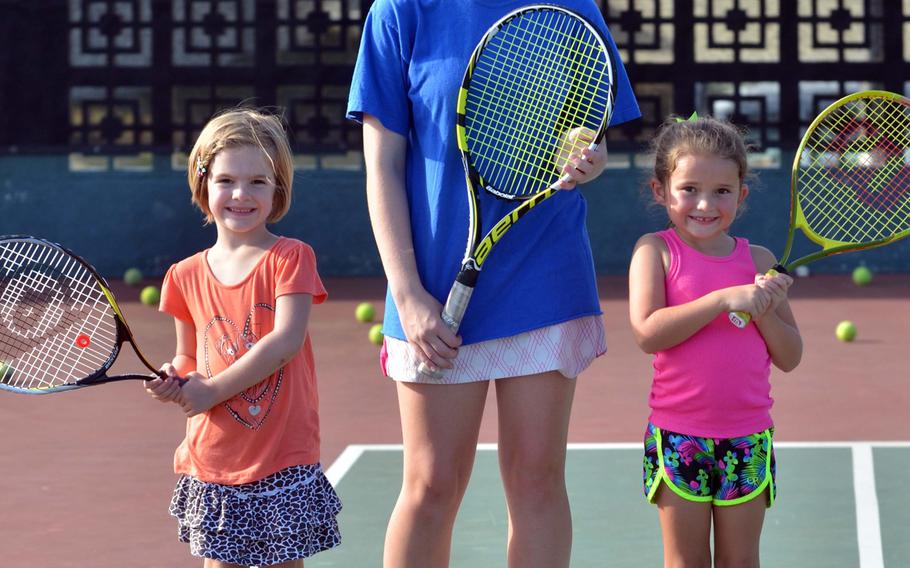 Kadena freshman tennis player Lily Oliver is flanked by 6-year-old Sydney Jones and 5-year-old Carson Chavis, two budding tennis pupils at the Risner Tennis Complex on Kadena Air Base, Okinawa. Lily started pretty much the same way, getting her first lessons at age 4 back in her native Kansas City. (Dave Ornauer/Stars and Stripes)

KADENA AIR BASE, Okinawa – Walking briskly around the back side of Risner Tennis Complex Court 3 during Tuesday’s practice, Lily Oliver watched as one of the complex’s instructors hit soft tosses to a pair of young novices, Carson Chavis, 5, and Sydney Jones, 6.

While she watched, Oliver got transported back in time, to 10 years ago in her native Kansas City, where she first picked up a racket. “That might have been me,” she told herself as she rejoined partner and Kadena teammate Nic Lay on Court 4 to continue a mixed-doubles match.

This season as a freshman, she won the Okinawa singles title on her way to a 12-1 record in multiple events. She’s earned the No. 4 seed in next month’s Far East Tournament, to also be held at Risner.

Her efforts on the court have attracted attention of teammates, foes and coaches. Aside from her mix of talent, shots and good footwork, she’s demonstrated an ability to stay poised under pressure.

“She’s a good person, a good student, she’s a joy to have with us on the team and she’s got a good head on her shoulders,” Kadena coach Amie Woo said of the team’s No. 1 singles seed.

“She’s very relaxed, she doesn’t get rattled at all,” said Lay, a senior.

While most players her age – she’s 14 – might feel pressure of being their team’s leading player, Oliver says she generally doesn’t.

“My main objective is to have fun,” Oliver said. “Even if I lose, I’m sorry to anybody who’s expecting something of me, but I do my best.”

It doesn’t matter, Oliver said, who’s across the net from her. She’s faced only Kubasaki players this season, but would play well-versed international-school players during Far East Nov. 3-6.

She says she doesn’t worry about what opponents do, that it’s important to focus just on her game. If she wins, she wins, Oliver said. If she doesn’t, she’ll try again next time.

“I know my teammates are cheering me on, so I feel them even if they’re not on the court with me. I’m not alone,” Oliver said. “Even if I lose, I know they’ll support me and help me come back.”

Oliver doesn’t have a lot of experience losing on the high school level, though. She went unbeaten in four regular-season singles matches and three of four doubles matches; the only one she did not win came with her regular partner Rita Feight unavailable. She and Lay had little trouble in mixed doubles, winning twice.

Oliver dropped five games in singles during the season and lost more than two games just twice in doubles, including that lone loss to Neitzke and Powers on Oct. 8.

Woo said she didn’t know what she was getting in Oliver, who played in local tournaments on and off base before entering high school.

Her abilities are not lost on one opposing coach.

Kubasaki’s Stephanie Davis said. “She’s got some speed on her serves (and) she has some power when she needs to, but her best asset is her consistency and she can move you around the court.”

If there’s one thing she does need to work on, it’s “consistency at the service line and not foot-faulting,” Woo said.

Whatever she faces during Far East, Oliver said the idea of seeing other players is one of tennis’ allures for her.

“You’re always kind of moving around, it’s exciting, you get to hit fast, hit slow, there’s all sorts of different players, there’s not just one type of player,” she said. “You just get a lot of experience.”