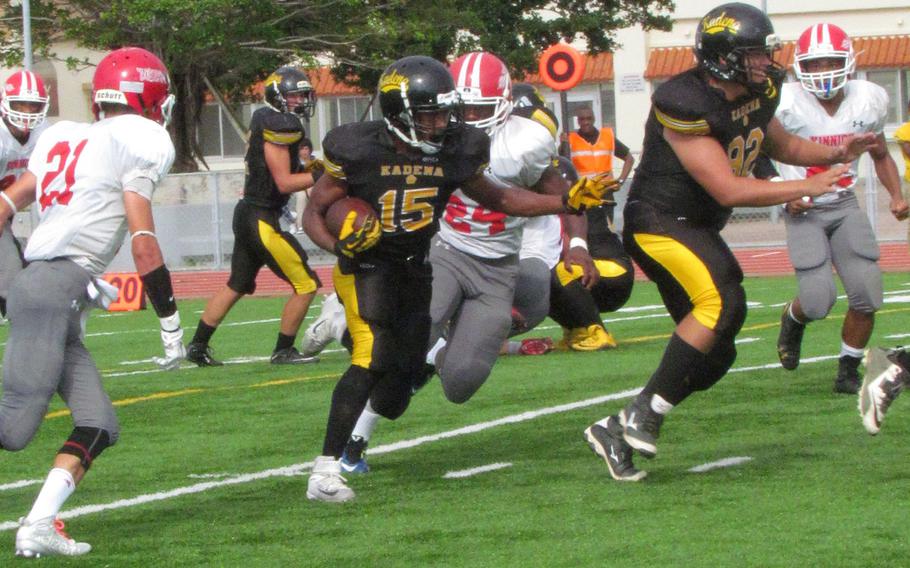 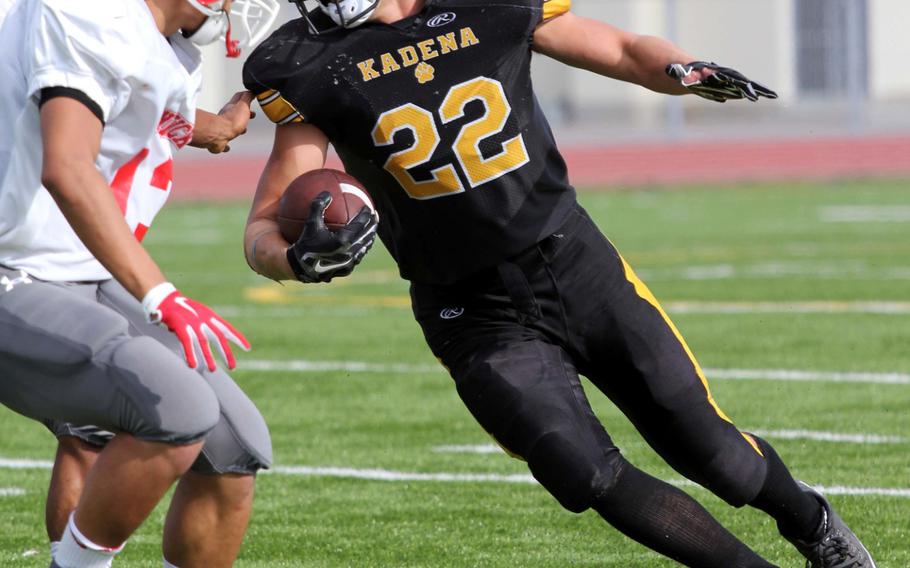 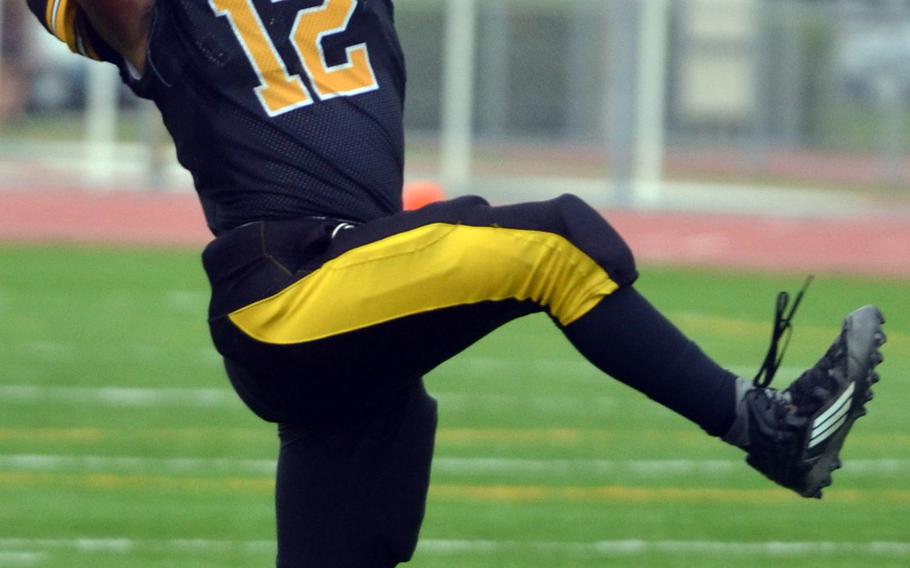 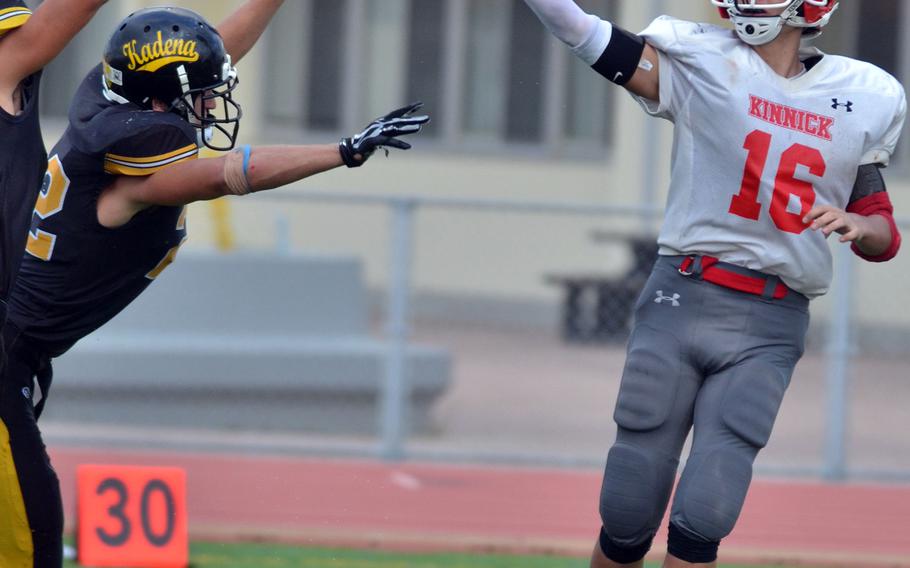 Nile C. Kinnick quarterback Brad Deibel gets rid of the ball amid a Kadena pass rush; Panthers' Abe Patterson intercepted the pass and returned it 34 yards for a fourth-quarter touchdown. (Dave Ornauer/Stars and Stripes) 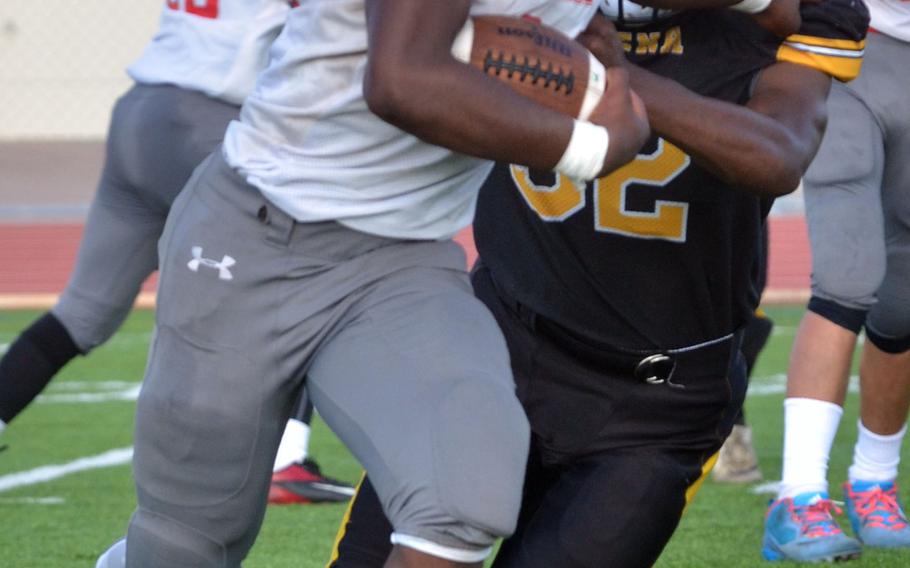 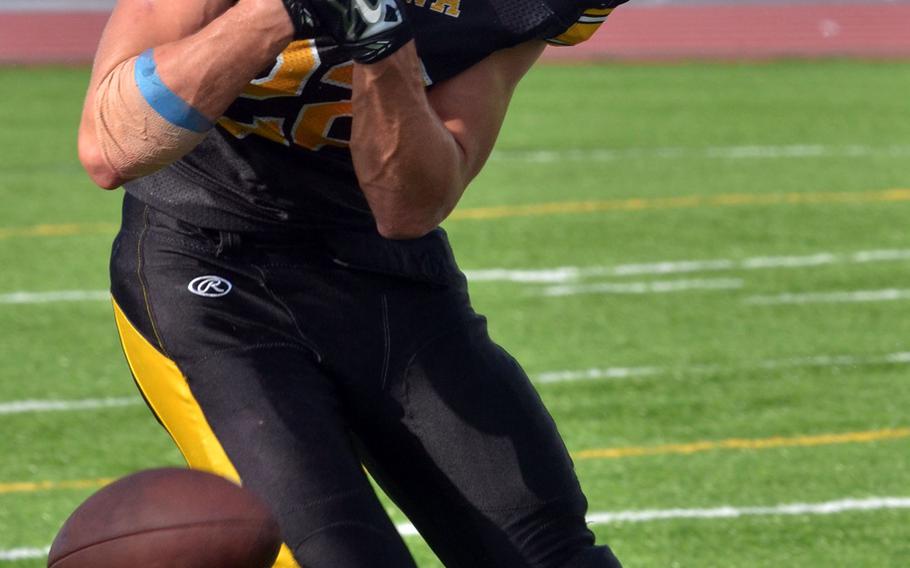 Kadena running back Dominic "Rocco" Santanelli can't find the handle on a pass. He later caught a 52-yard scoring pass and rushed 14 yards for another touchdown. (Dave Ornauer/Stars and Stripes) 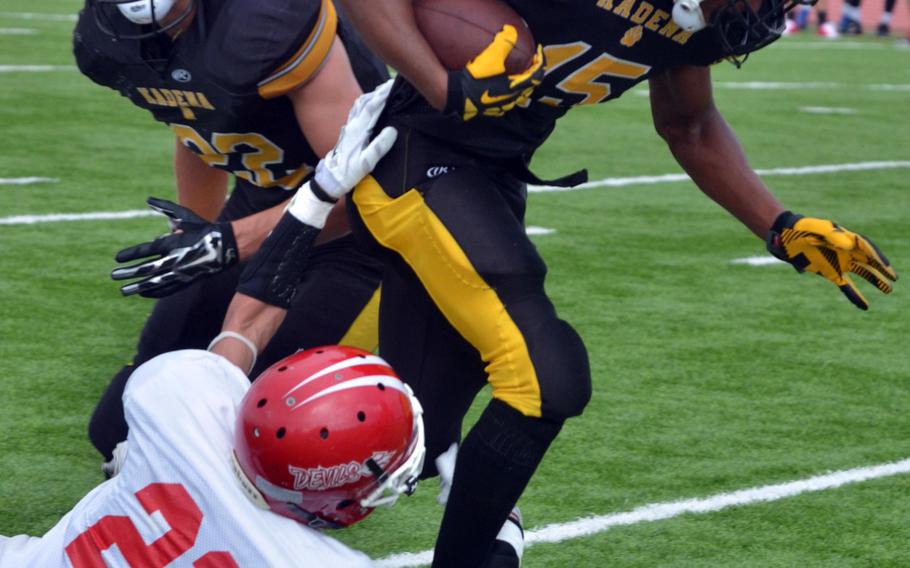 Kadena running back Jason Bland tries to slither out of the tackle of Nile C. Kinnick's Nick Galegher. (Dave Ornauer/Stars and Stripes) 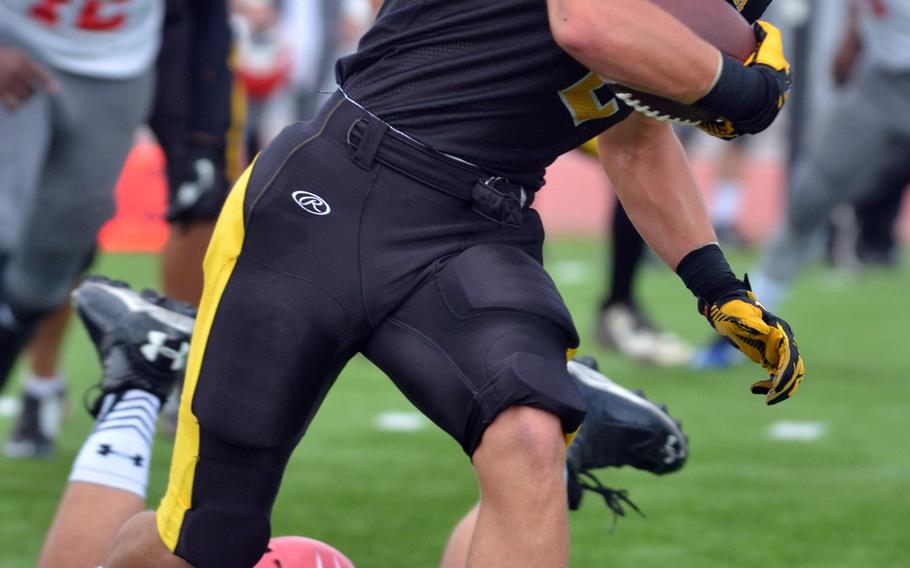 Kadena running back Hunter Corwin slips through the grasp of Nile C. Kinnick defender Will Walker. (Dave Ornauer/Stars and Stripes)

The senior back rushed for 175 yards and two touchdowns on 23 carries, while backfield mates Dominic “Rocco” Santanelli and Hunter Corwin each rushed for scores. As a team, Kadena rushed for 333 yards to rout Nile C. Kinnick 51-13 on Saturday to keep hope alive for defending their Far East Division I title.

And as a team, Kadena’s players are achieving the same sort of bond, Mendoza said, that helped lead them and their predecessors to Far East D-I titles in 2007, 2009, 2010 and last year.

“It’s not so much their performance, but the way they’ve come together,” Mendoza said, describing their bonding the last few days as an “epiphany. They believe in themselves. They love each other. When we’ve done that in the past, we’ve usually won.”

With the victory, the Panthers (2-2 overall, 1-1 D-I) swept the season series from the Red Devils (3-2, 1-1), making the mountain slightly higher for Kinnick if it hopes to reach its first D-I title game on Nov. 7.

“I’m proud of my guys; they’re (Kadena) just a better team than we are,” Red Devils coach Dan Joley said of a Panthers team that also beat Kinnick 35-21 on Sept. 12. “Poor tackling. Turning the ball over. We have to fix some things. If we can’t execute the basics, it makes it tough to win a game.”

Sophomore quarterback Cody Sego starred on both sides of the ball. He rushed for a touchdown, was 5-for-7 for 141 yards and the TD pass to Santanelli and intercepted a Kinnick pass. Abe Patterson returned an interception 34 yards for a score, one of four Kadena takeaways.

The Panthers won despite hurting themselves with penalties – 17 in all for 167 yards, including 11 major penalties of 10 yards or more.

Jamerson led the Red Devils with 78 yards on 12 carries and recorded 223 all-purpose yards on 15 touches.

Kinnick next hosts Yokota for its homecoming game on Friday; kickoff is at 7 p.m. Kadena visits Kubasaki on Friday in a game with no bearing on the D-I standings, since the Dragons have already won the season series from the Panthers. Kickoff for that game is 6 p.m.