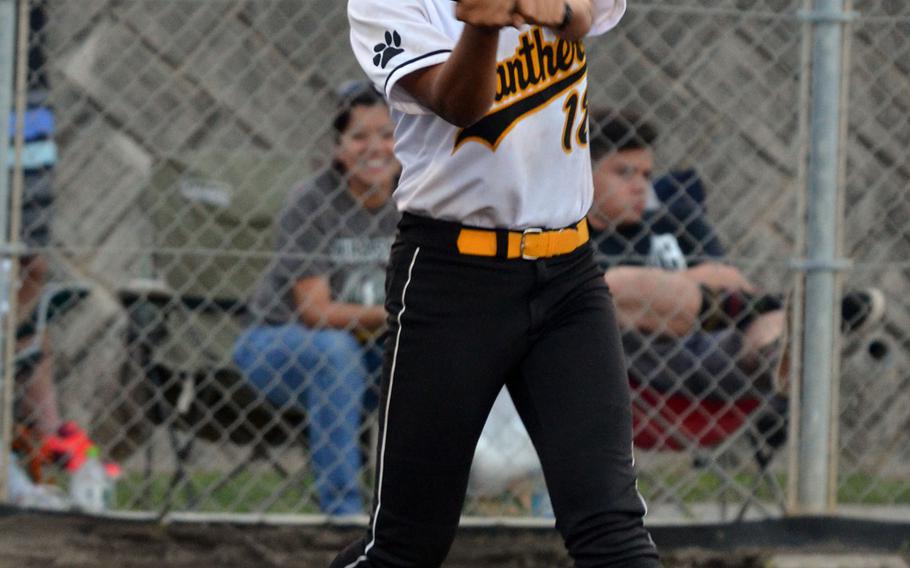 Kadena sophomore Yasmine Doss batted 4-for-4, including a triple in the eighth inning, after which she scored the winning run on a passed ball. (Dave Ornauer/Stars and Stripes)

Kadena sophomore Yasmine Doss batted 4-for-4, including a triple in the eighth inning, after which she scored the winning run on a passed ball. (Dave Ornauer/Stars and Stripes) 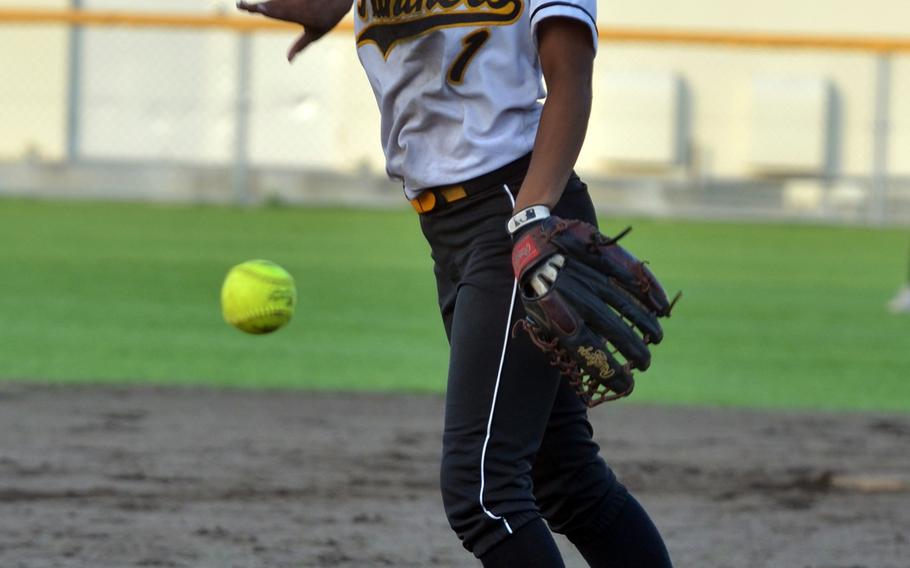 KADENA AIR BASE, Okinawa – Yasmine Doss says she tends to pull the ball to the left side in most plate appearances for Kadena. So, when the sophomore belted a line drive to the right-center field gap in the eighth inning Friday, it kind of caught her off guard.

“I was surprised,” she said after she tripled on that hit and scored the winning run on a wild pitch to give the Panthers an 8-7 win and a sweep of the Okinawa district softball best-of-three series.

“I usually don’t hit to the opposite field. So, that I waited and went the other way with the pitch, I felt good,” Doss said.

One out later, she took off from third base when a delivery from reliever Leah Bebout skipped past backup catcher Madison Richardson, and scored the run that capped the game and the series.

“I was thinking, ‘This is it, we’re about to finish the game,’” Doss recalled about her dash to the plate. “I slid in and that was it.”

The play ended a game that see-sawed back and forth, particularly in the late innings. Kadena led 2-0 until the top of the fifth, then the Dragons scored five unanswered runs, capped by Mercedes Abadia’s two-run single in the sixth inning.

Doss capped a four-run Kadena sixth inning with an RBI single, but the Dragons answered with two in the top of the seventh, scoring the go-ahead run on a bases-loaded walk to Abadia. Alexis Sparrow’s infield single plated Cassidy Delatte with the tying run in Kadena’s half of the seventh, setting the stage for the finale.

It was not a typical Kadena performance, coach Kelli Wilson said, not like the Panthers’ 8-2 Game 1 win the previous Friday at Camp Foster. The Panthers were not making adjustments at the plate and not swinging at good pitches, Wilson said.

“They do well battling back and getting the job done at the end,” she said. “We just need to do it a lot quicker. It goes back to us beating ourselves. They had the mentality of trying to kill the ball instead of making contact and trusting themselves.”

The Dragons kept fighting back despite losing Isa Munoz, Destiny Velarde and Angelina Parker from the starting lineup; the three took part in Kubasaki’s spring choir concert, and had to leave after the fifth inning.

“They overcame,” Kubasaki coach Stephanie Davis said. “They were mentally tough, they were positive, they were energetic and they were a team that had heart. I’m very proud of them.”

With the win, Kadena captured the district championship for the fourth straight year and the 13th time in the 14 seasons of high school softball on Okinawa.

“I’m excited,” said Doss, who transferred from Lompoc, Calif., to Kadena for this season. “To be part of a winning team, it feels really good.”

The next destination for the two teams is the Far East Division I Tournament starting Monday at Yokosuka Naval Base, Japan. Kadena is the two-time defending champion; the Panthers beat Kubasaki in last year’s championship game.