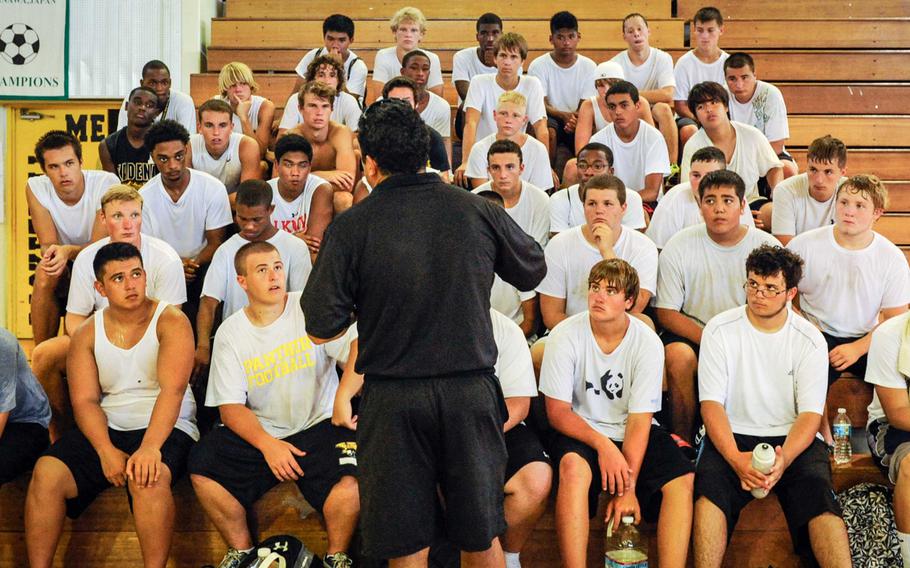 Kadena players pay rapt attention to coach Sergio Mendoza as he makes his point during a team meeting. Mendoza is hoping his Panthers can rebound from a 3-4 season, the first losing season on his seven-year watch. (Adam Fondren/Special to Stars and Stripes)

Kadena players pay rapt attention to coach Sergio Mendoza as he makes his point during a team meeting. Mendoza is hoping his Panthers can rebound from a 3-4 season, the first losing season on his seven-year watch. (Adam Fondren/Special to Stars and Stripes) Kadena sophomore quarterback Alex Hanks awaits the snap from senior lineman James Alexander, one of two veterans of the line wars along with senior Damien Reese. Kadena's line is long on numbers but short on experience entering the season. (Adam Fondren/Special to Stars and Stripes) 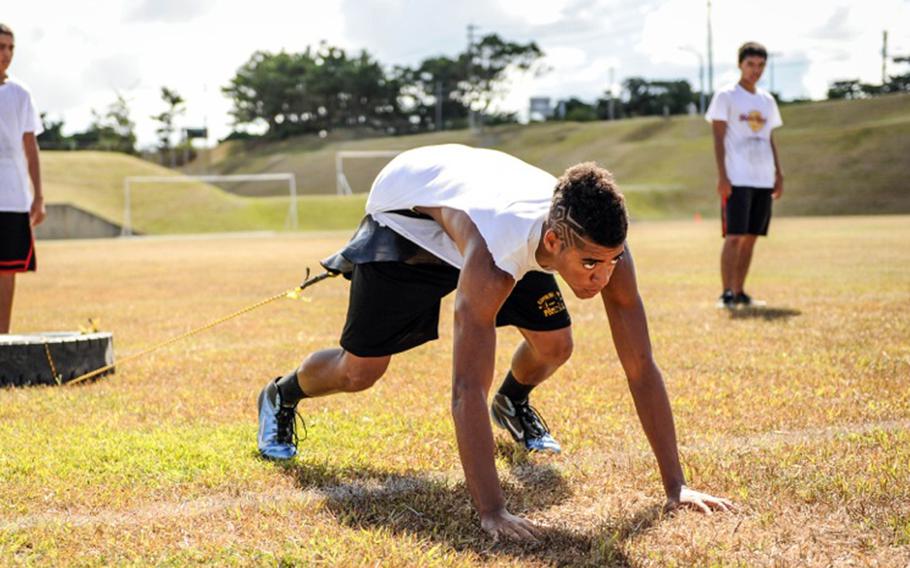 Kadena senior tight end Damien Reese gets set to do a tire-pull drill during a recent practice at Kadena High School. Reese and fellow senior James Alexander are the leaders of a line long on numbers but short on experience. (Adam Fondren/Special to Stars and Stripes)

Seventh in a series of high school football previews.

KADENA AIR BASE, Okinawa – Rarely do anybody but running backs enter any conversation regarding Kadena offensive stars of the days of yore. That may change this season, thanks to a pair of newcomers to Panther football who may turn the team into more than just a passing fancy. “We haven’t had a wide receiver like him, ever,” coach Sergio Mendoza says of 6-foot-5 senior Preston Harris. Better known for his basketball prowess, Harris was asked to give the wideout position a try, and has already impressed Mendoza during two-a-day drills on Kadena’s middle and upper fields. For his part, Harris seems to be warming up to the role. “It’s good. It’s fun,” he said of donning helmet and pads. Throwing passes to Harris will be a new arrival to Panther Nation: Tanner Stuart transfers to Okinawa out of Altus High in Oklahoma. If state lineage and Panther history mean a thing, the last time Kadena welcomed an Oklahoma product - Sean Shattuck - the latter’s 727 yards and seven touchdowns on 54 carries helped power the Panthers to the 2006 Class AA title game. If everything clicks right between Stuart and Harris, and if an offensive line long in numbers but short on experience can blossom quickly, Mendoza believes good things are in store for a Kadena team that went 3-4 in 2012 – the first losing season in seven years. “We’ve never had so many linemen, but there’s not a lot of experience,” Mendoza said of a group centered around seniors James Alexander and Damien Reese. “They’re not big, but they’ll be well conditioned.” Kadena increased the number of summer conditioning days to six, instead of four. That, plus the leadership of a veteran backfield group including juniors Justin Sego and Barry Mitchell and seniors Gage Bongo, D.J. Padilla and Darren Gerstner could spark a turnaround, Mendoza believes. “Two years ago, we were too young. Last year, we were too immature,” he said. “This may have been the best two-a-days and summer workouts we’ve ever had. The attitude is there. The coaches as well as the players have really matured.” Kadena opens at home on Thursday, hosting island-rival and last year’s Division I runner-up Kubasaki.ornauer.dave@stripes.com