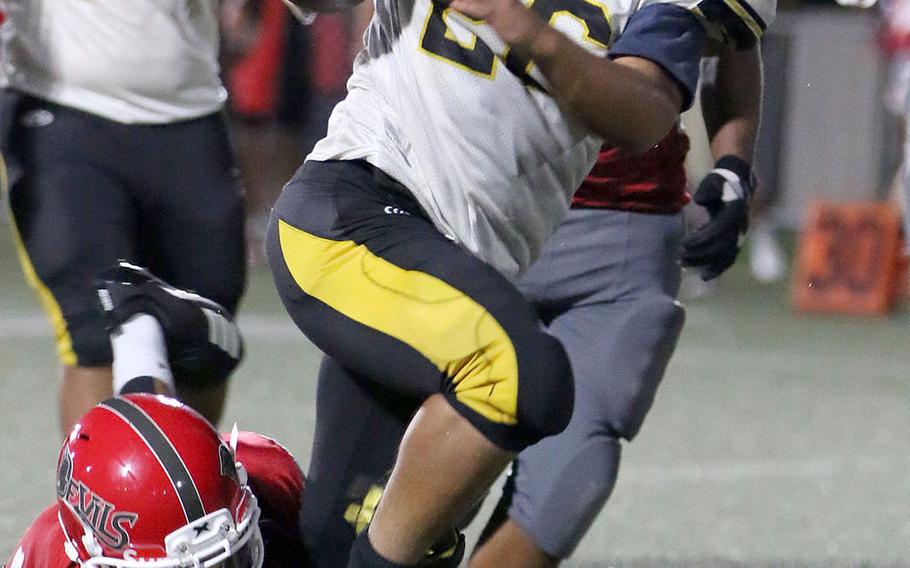 Kadena running back Alfonso Mendez slips through a Nile C. Kinnick tackle en route to the end zone for one of his four touchdown runs. (EmmanestaStovall/Special to Stripes)

Kadena running back Alfonso Mendez slips through a Nile C. Kinnick tackle en route to the end zone for one of his four touchdown runs. (EmmanestaStovall/Special to Stripes) 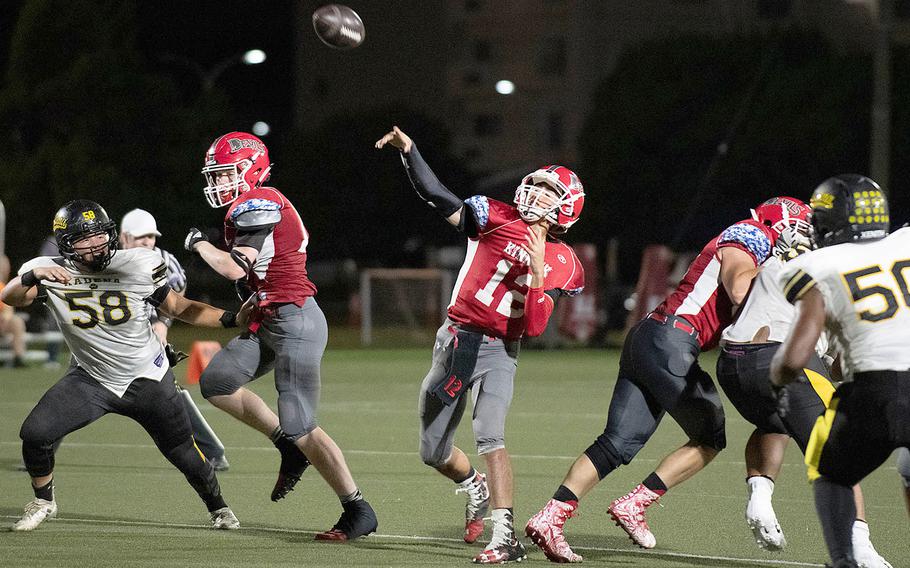 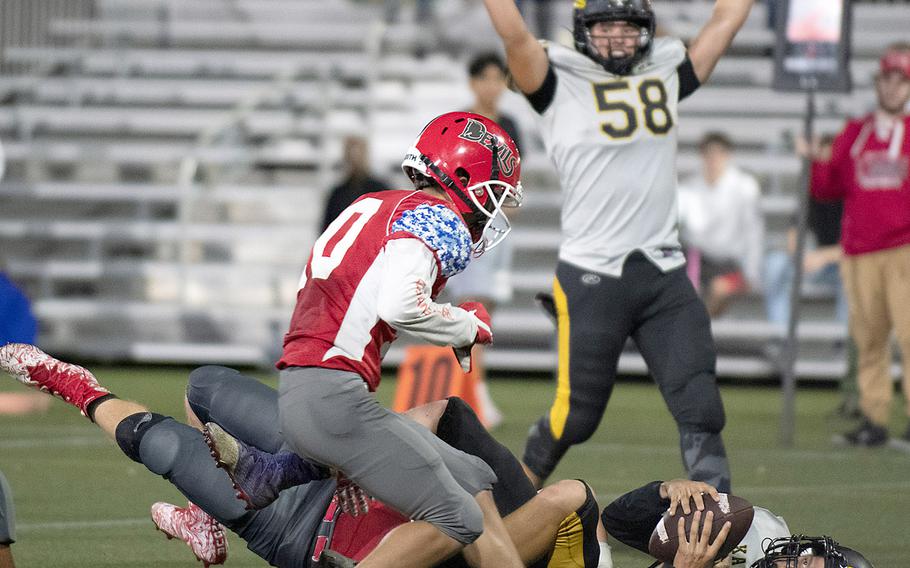 Kadena quarterback Jack Carey bulls his way into the end zone as teammate Dean Owen celebrates behind him. (Jimmy Mills/Special to Stripes) 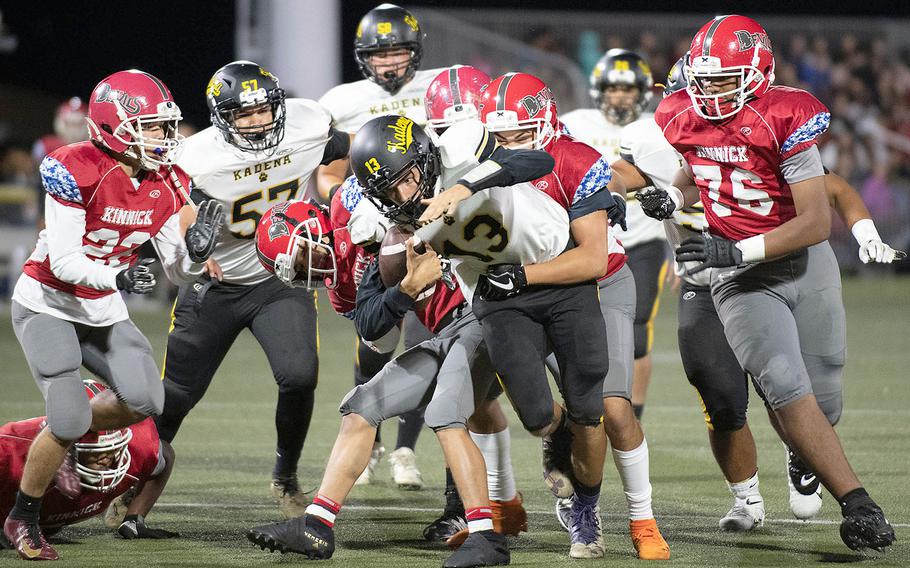 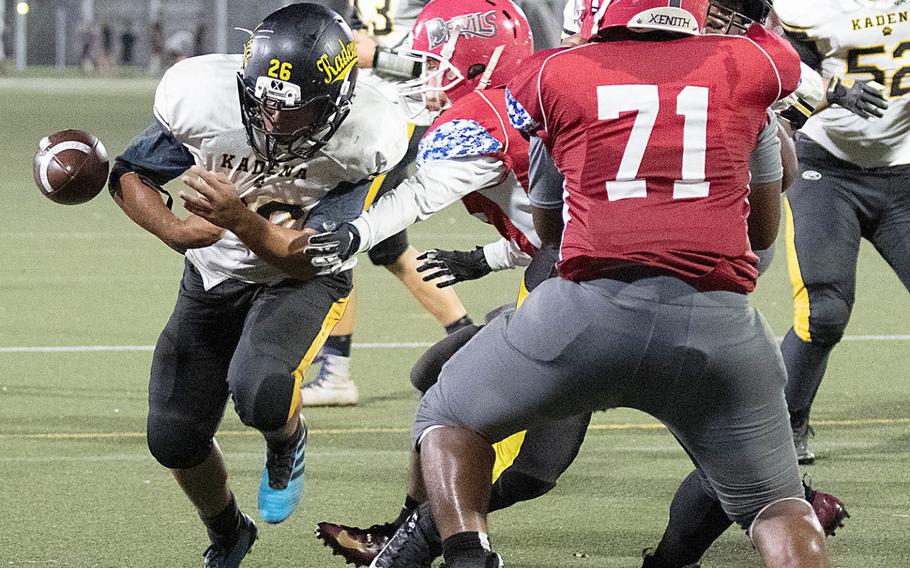 Kadena running back Alfonso Mendez loses the handle on the ball as he nears the goal line against Nile C. Kinnick. The play was ruled a touchdown, one of four Mendez scored in Friday's game. (Jimmy Mills/Special to Stripes) 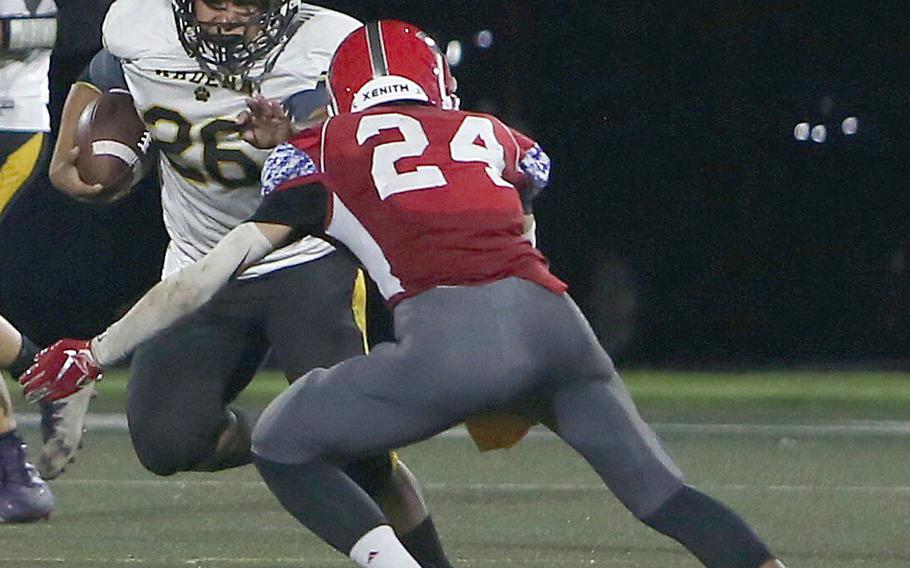 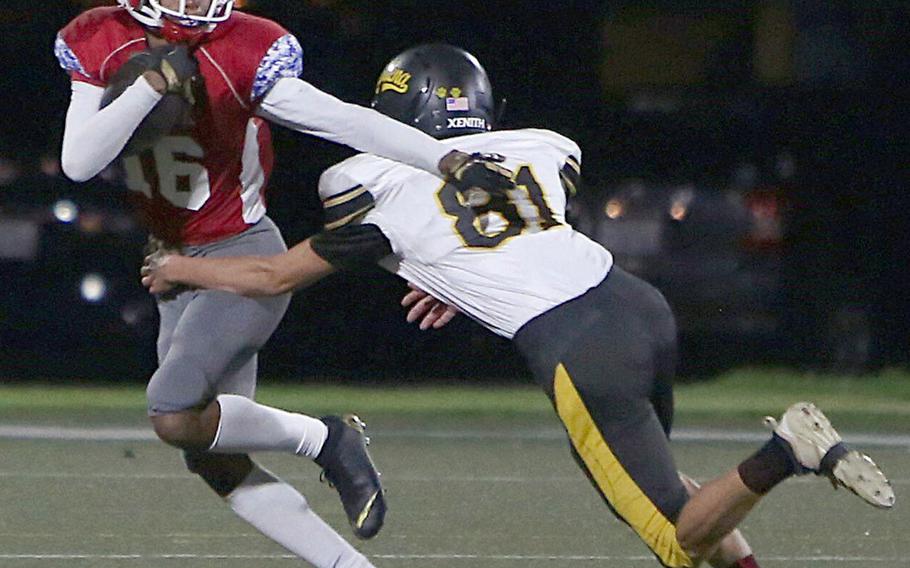 YOKOSUKA NAVAL BASE, Japan – Alfonso Mendez continues to pile up yards and touchdowns for Kadena.

And while Friday’s game with Nile C. Kinnick wasn’t for the championship, the Panthers gained a measure of revenge for their defeat in last year’s Far East Division I final.

Mendez, Kadena’s senior running back, ran 26 times for 281 yards and scored four times, giving him five TDs on the season, and Jack Carey also rushed for a score and the Panthers pulled away in the second half to down the reigning Far East D-I champion Red Devils 35-7 at Yokosuka’s Berkey Field.

“He runs with a lot of heart and determination,” coach Sergio Mendoza said of Mendez, who has 389 yards on 46 carries in the last two games, filling the shoes of injured starter Trent Fowler. “He’s worked hard for it. He’s shown that he can do it. He’s going to have a great season.”

Mendoza’s chief worry entering the season was replacing a starting backfield that accounted for 22 touchdowns and 1,610 yards of total offense.

Mendez, Mendoza says, is well on his way toward mirroring the feats of his predecessors at Kadena.

“He’s becoming one of our traditionalist Kadena running backs,” Mendoza said. “He’s running the ball so well, but the line is also blocking better.”

“We got beat by the better team,” Kinnick coach Dan Joley said. “They were more disciplined. Sergio had his guys ready to play.”

Youthful mistakes, Joley said, including procedure penalties, dropped passes and turnovers, plus an untimely third-quarter injury to starting quarterback Patrick Kelly - who scored the Red Devils’ lone touchdown, a 32-yard second-quarter run - combined to do in the Red Devils.

Kelly had to leave the field for a play when Kinnick was driving into Kadena territory. The Red Devils promptly fumbled the ball away on the next play and the Panthers drove the length of the field for a score.

“Crucial points in the game … put us in position to where we had to take chances,” Joley said.

Meanwhile, the Panthers cut down on penalties which hurt them in their first two games, Mendoza said. “We were able to execute at a much higher level,” he said. “I think this is just the beginning.”

The Panthers next must take another road trip to the Kanto Plain, visiting American School In Japan at the school’s Spirit Day next Saturday. Kinnick gets next week off and will host Division II Yokota on Oct. 4.