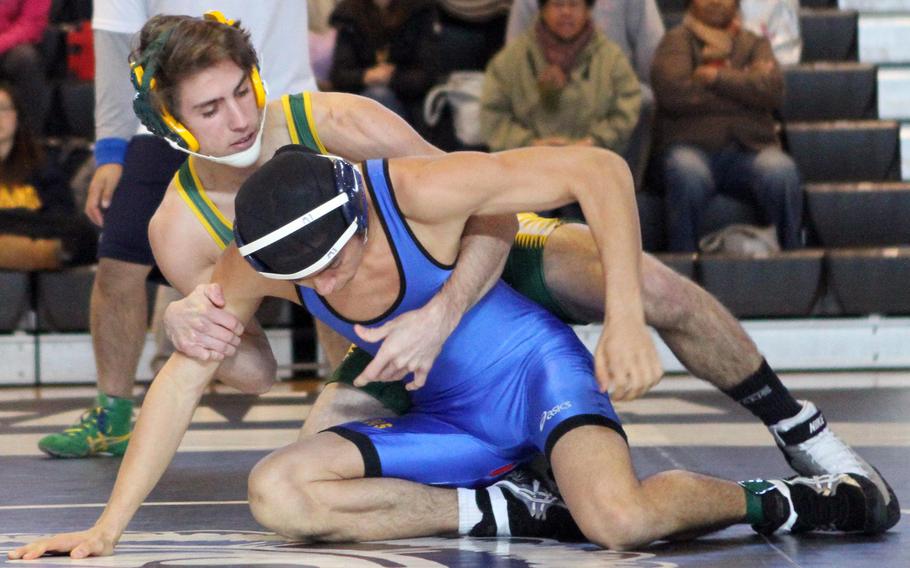 Buy Photo
Hunter Matthews of Robert D. Edgren gains the edge on St. Mary's International's Alberto Orsawa in their 129-pound bout during Saturday's four-way dual tournament at Camp Zama, Japan. Matthew won the bout and went unbeaten on the day for the second straight week. (Hannah May Greer Hicks/Special to Stars and Stripes)

CAMP ZAMA, Japan – While Nile C. Kinnick and Seoul American remained unbeaten as teams with the season just two weeks old, other wrestlers are showing the potential to do big things in league and Far East tournament play, coaches said.

“We won” against St. Mary’s, “but so many matches could have gone either way; it’s hard to say,” Wilson said. “We had wins and they had wins that I thought they should, but the rest were back and forth.”

Wilson also continues to view Edgren’s Hunter Matthews (129) and Kaleb Atchison (141), who also went unbeaten on Saturday, as cogs in a potential Far East small-schools title bid by the Eagles. “They’ll be tough to beat at Division II,” he said.

While Zama lost its three duals, Jacob Scott made his season debut at 148 and looked impressive, Wilson said.

Over in Korea, Jack Barnes continued Saturday to round back into shape from shoulder surgery which sidelined him last season, going unbeaten a second straight week at 215 pounds. He and a handful of other DODDS Korea wrestlers have the potential to do good things, Falcons assistant coach Julian Harden said.

“Jack could be OK. It depends on how much he grows,” said Harden, who spent 13 seasons as the Falcons head coach and now assists Ben Pak. “He has a wealth of potential. He has skill. I like his chances. He just needs to work on it.”