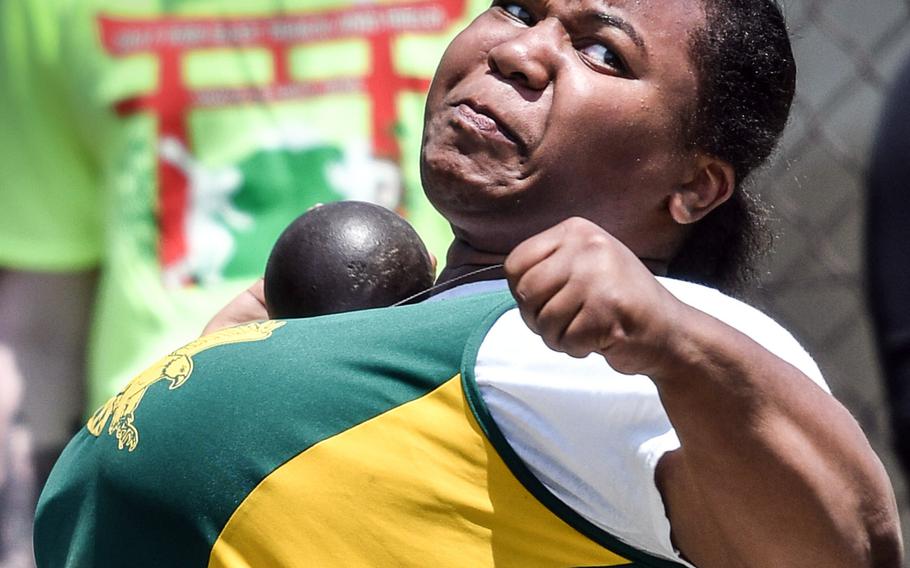 Robert D. Edgren senior Brianna Hunter burst onto the Japan and Pacific track and field scene with a shot put of 11.97 meters on March 18, and exits having rewritten that, 12.97 in the Far East meet, and the Far East meet record in the discus. (Jack Higbee/Special to Stars and Stripes)

YOKOTA AIR BASE, Japan -- Brianna Hunter stepped into an unfamiliar track and field environment in March. Far from the familiarity of Missouri, where she was a three-time state shot-put finalist, Robert D. Edgren, her new school some 360 miles north of Tokyo, didn’t even have a practice throw area.

Two months later, after Hunter broke and re-broke the Pacific’s shot-put record and the Far East meet discus mark – earning Stars and Stripes’ girls track and field Athlete of the Year honor – Hunter looked back and said she wondered how any of it was possible.

When she left Knob Noster High School in Missouri for her first journey overseas, Hunter said she was told that “you’re going to be so good” in Japan. “But I wasn’t so sure. I thought people were going to be just as good as me.”

Hunter topped out at 12.351 meters in the shot put and 29.642 meters in the discus, finishing third and fifth in the Missouri state finals as a junior. But she said she initially felt that would be it in terms of distances.

“I didn’t know I was going to break Pacific records,” she said.

Without a regular throw area to practice, and without a true throwing coach on Edgren’s track and field staff, Hunter would venture to the turf field next to the high school, where she would line up on the narrow track and throw the discus and shot onto the turf.

But the first meet came on March 18 at Yokota, where Hunter threw a surprising 11.79 meters in the shot. That broke a 20-year-old record, 11.02, set by Tanna Rivera of George Washington on Guam.

“She came out of nowhere,” said Zama coach DeAngelo Galang, who watched that throw.

Hunter followed that a week later by becoming the first Pacific athlete to exceed 12 meters, recording a 12.33. At that point, coaches said throws of 12.5 meters or even longer were possible.

Such feats would have to wait a couple of months, however. Hunter followed the March 25 throw with a slump of sorts, and she said she even thought that maybe she had peaked. “I wondered if I could throw any farther than I had,” Hunter said.

So she redoubled her efforts, Hunter said, in the weeks leading up to the Far East meet. After hitting 12.07 on the first throw and scratching on the second, Hunter finally broke through, recording a 12.35 on her third try.

The fifth throw was the real charm, as she uncorked a 12.97 – nearly two meters past the previous Pacific standard set 20 years earlier. “I’m ecstatic. This was crazy, honestly,” she said.

And Hunter wasn’t done. The second day of the meet, she threw the discus 33.83 meters, breaking by .71 the record of 33.12 set by Zama’s Christian Garner that had stood for five years.

“After that last throw, I broke down and cried,” Hunter said, adding that she had no idea what the record was before it. “I didn’t know I was going to get that.”

With her high school years over, Hunter is now off to Briar Cliff (Iowa), a Division III school where she will throw shot and discus.

“I don’t want it to be over,” Hunter said of leaving Edgren. “But I’m going into college now. Different things to be done.”