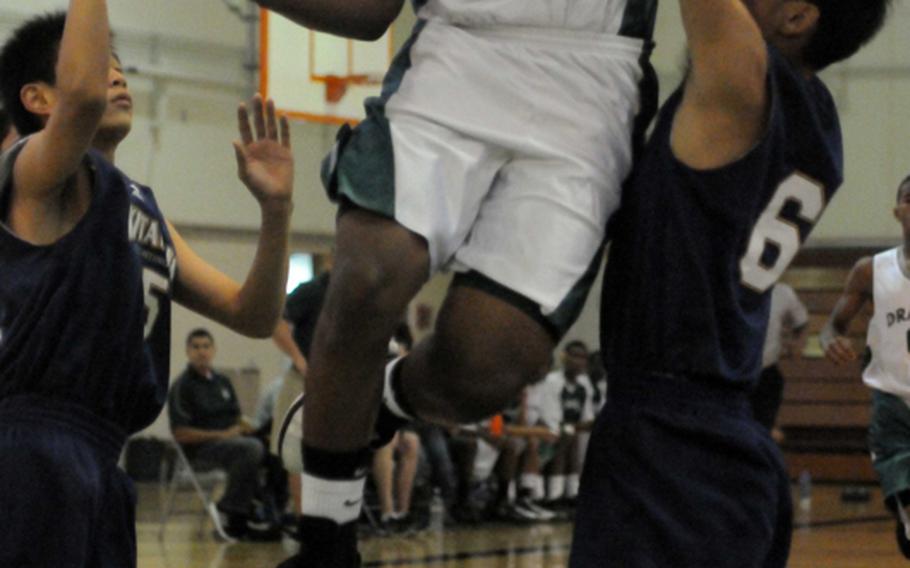 They&rsquo;re trying for their first winning season since 2006-07. Rebekah Harwell may have sounded the first warning shot on Saturday for Matthew C. Perry&rsquo;s girls basketball team.The senior shooting guard tied the two-year-old Pacific record for points in a single game, with 44, to power the Samurai past Nagoya International 57-45 en route to a weekend sweep of three games, giving Perry a 3-2 record two weeks into the season.&ldquo;I&rsquo;m excited. That&rsquo;s good. That&rsquo;s big. Oh, wow,&rdquo; said Harwell, reached by cell phone en route back to Marine Corps Air Station Iwakuni from Nagoya. &ldquo;I&rsquo;m very surprised. I&rsquo;m happy.&rdquo;&ldquo;You don&rsquo;t realize it during the game, but afterward you say, &lsquo;Wow, she scored a lot of points,&rsquo;&rdquo; first-year Samurai coach April Kelley said.Harwell matched the single-game girls mark of 44 points set on Nov. 28, 2009, by Kubasaki senior Gabby Falco in a 69-67 victory over Kadena in the Hong Kong International School Holiday Tournament.Falco is also the only girls player in Pacific history with two 40-point games; she scored 42 in a 71-56 victory over Yokota on Feb. 18, 2010, in the Far East Division I Tournament at Camp Zama, Japan.The only other players with 40 or more were Yevonne Sears of Robert D. Edgren, who had 41 points on Feb. 24, 2000, against Yokota in the 2000 D-I Tournament at Misawa Air Base, Japan; and Jessica Richert of Osan American, with 40 points in a 58-32 home win over Taejon Christian International on Feb. 9, 2006.Given Harwell&rsquo;s early breach of the 40-point mark, Kelley believes this may be just the beginning. After losing their first two games against E.J. King, the Samurai now have won three straight. Their last winning season was 2006-07 at 19-13; they went 21-68 the next four seasons.&ldquo;She&rsquo;s able to read defenses so well, gets the open looks, takes all those shots,&rdquo; Kelley said. &ldquo;To have her on the team and score all those points, I&rsquo;m happy to have her.&rdquo;

Defending boys D-I champion Dragons cruiseDefending Far East Boys D-I Tournament champion Kubasaki broke out of the gate in style, beating Kitanakagusuku, the No. 3-rated Japanese team on Okinawa, 77-59 in the Dragons&rsquo; season opener at home. And it was mostly younger players who did the job, coach Jon Fick said.

&ldquo;We had a lot of guys without varsity experience who played well,&rdquo; he said of players such as junior Jaysyn Brown (12 points, 5 rebounds) and freshman DaQuan Alderman (11 points). Senior Xavier Price led the Dragons with 14 points and 13 boards.Fick said his Dragons played &ldquo;mid- to late-season defense&rdquo; on two or three third-quarter trips down the court against the Fighting Lions. &ldquo;It&rsquo;s a good start for us,&rdquo; Fick said. &ldquo;We still have a long way to go (but) this was a surprise to me. We&rsquo;ll take it.&rdquo;