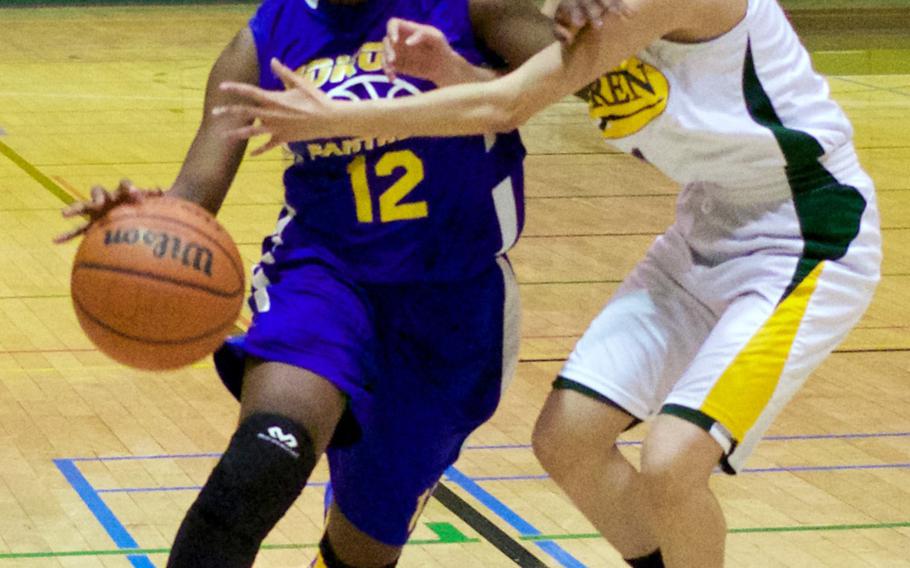 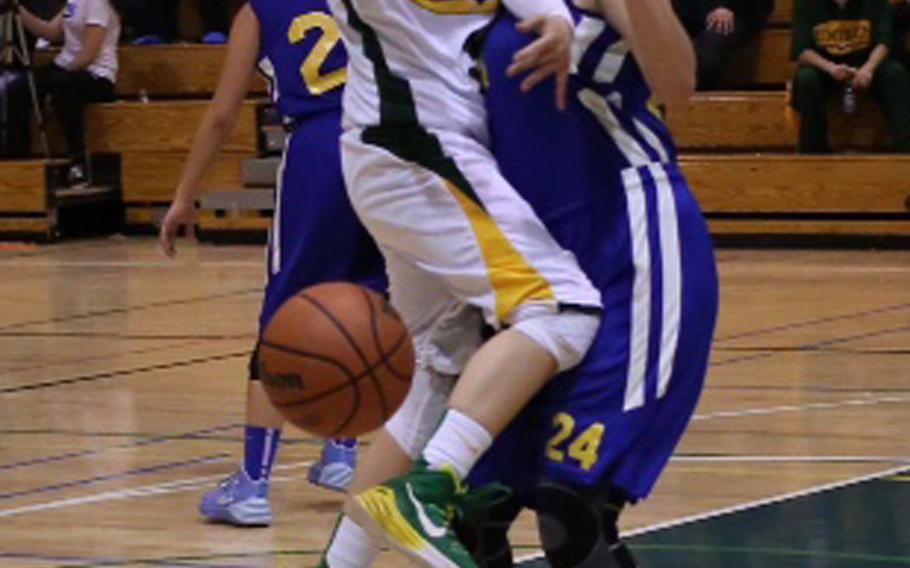 MISAWA AIR BASE, Japan – Behind a punishing inside game, Yokota’s girls had beaten their first seven opponents by an average margin of 23.7 points, best in the Pacific.

But behind strong defense and perimeter shooting, Robert D. Edgren turned the tables Friday on the Panthers.

Vanessa Black scored 20 points and the Eagles clamped down on Yokota’s inside tandem of Sarah Claypool and Caitlyn Rowan, holding them to 10 points, en route to a 50-24 upset - the Panthers’ first loss of the season.

Prior to the game, coach Sarah Richardson emphasized with her Eagles the need for aggressive play, rolling and diving for loose balls, crashing the boards and sacrificing the body for the good of the team.

“I’m not saying that’s why they did so well,” Richardson said, “but they played aggressively, the defense was on, they were shooting, boxing out, playing as a team. It came together tonight. They were really hungry.”

Essence Prince added 10 points for the Eagles, who improved to 4-1 on the season and remain the only DODDS Japan team unbeaten in Division II play. It was the first meeting of the two teams with Yokota as a Division II team.

It was also the first game for the two teams following the three-week break for Christmas and New Year, which meant the usual trials of shaking off the rust and getting used to being back on court again.

“You’re trying to get that rhythm back that you worked on the first few weeks of the season,” coach Dean Florio said after his Seoul American girls cruised past Daegu 58-15. “It’s almost like starting over.”

One team that didn’t seem to have a problem getting untracked was Nile C. Kinnick’s girls, who got 20 points, seven rebounds and five steals from Rhyssa Hizon and held perimeter specialist Naomi Ziola to five points in a 44-9 romp at Matthew C. Perry.

Coach Michael Adair’s strategy meant paying close attention to Ziola, who had torched E.J. King for 34 points, including 10 three-pointers, in Perry’s last game before the break – a box-and-one defense, which he says he doesn’t prefer.

“I’d rather play straight up defense,” Adair said. “The key for us was not letting her have the ball. I hate to use the box-and-one, but she’s too good for that.”

In addition to getting their basketball legs back under them, some teams entered the weekend at a disadvantage, losing some of their players for the week-long Model UN Conference in Hong Kong.

One of those players lost was junior Rikki Kendall, which left E.J. King without its starting shooting guard. The Cobras beat Zama 53-38, but it was touch and go, with one player fouling out in addition to being down Kendall, coach Scott Jarrard said.

“I was stretched thin, but we just kept hanging in there,” said Jarrard, whose Cobras gave up 21 points to Alex Jones but held inside man Joseph Atkinson to five. “They’re big inside. You have to be disciplined to beat that team. They can put points on the board.”