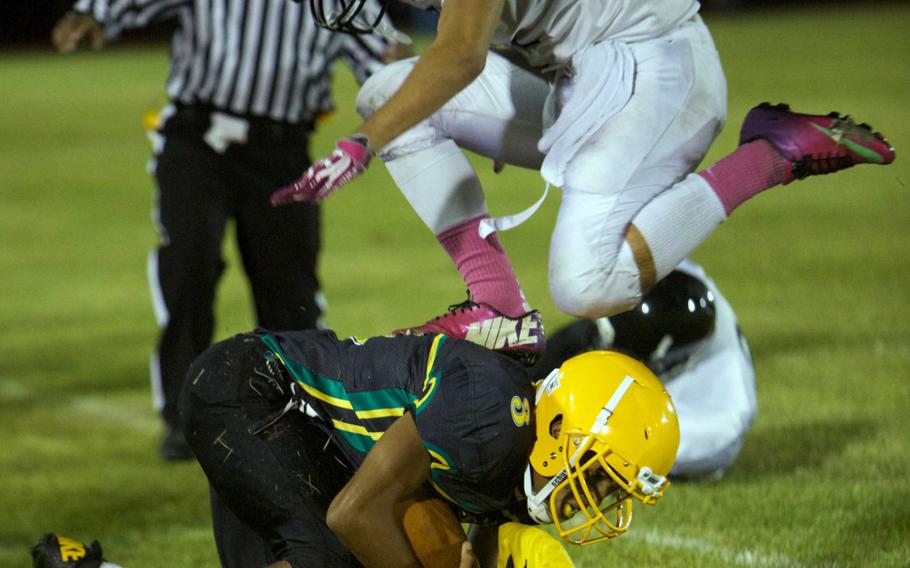 Zama's Jake Bayardo and Kevin Groce and Robert D. Edgren's Daniel Lovett go up for the ball Friday during a game at Misawa Air Base, Japan. (Sheila Suckart/Special to Stars and Stripes)

MISAWA AIR BASE, Japan – In a game filled with offensive and special-teams fireworks, defense arrived just in time to save Robert D. Edgren’s season.

The Eagles’ defense stopped Zama on a game-winning two-point conversion attempt, preserving a 35-34 win Friday at Eagles Field. It sends Edgren to Yokota next Saturday for a neutral-site game with Matthew C. Perry with host rights to the Far Esat Division II title game on the line.

“We were a little shaky on tackling, but the tackling came up big when it mattered, in the end,” Eagles coach Jeremy Sanders said.

Edgren led just 16-12 after one period, then pulled ahead 35-20 before Zama rallied and got within one point on Jaeden Baker’s 65-yard touchdown run. The Trojans had the ensuing two-point conversion called back on a penalty, then the Eagles halted them on the second try.

“We were right in the money, slipped out, then fell back in at the end,” Trojans coach Steven Merrell said. “We just weren’t able to finish the deal. We had some bumps in the road, some things we need to fix. But I was proud of the way the kids played.”

Daniel Lovett and Shawn Robinson served as the big playmakers for the Eagles. Robinson threw touchdown passes of 61 and 69 yards to Lovett and a 5-yarder to Joseph Njorge, while Lovett also ran back kickoffs 80 and 85 yards for touchdowns.

“Daniel Lovett showed out,” Sanders said. “He was everywhere, all purpose tonight.”

Zama answered with Baker and his brother, Jaelen, who ran 70 yards for a score, picked off a pass and had a pair of two-point conversion runs. Jaeden Baker and Jake Bayardo each returned kickoffs 90 yards for touchdowns. Zach Dignan added a 1-yard TD run.

Edgren needs a win Saturday by 23 points or more to win host rights to the D-II title game by points aggregate, while the Samurai only need to beat the Eagles.

Despite those daunting odds, Sanders feels his charges are picking up on things. “We wanted to get this second win to get momentum behind our selves. Understand what it takes, come up blood, sweeat and tears, nobody’s going to hand anything to them, they have to come out with effort and heart,” Sanders said.

For the Trojans, it’s now back-to-back Division I-equivalent games, Friday at Yokota and Oct. 17 vs. American School In Japan.

“We’re obviously disappointed, our season record isn’t what we want it to be, but they fought to the end tonight,” Merrell said.