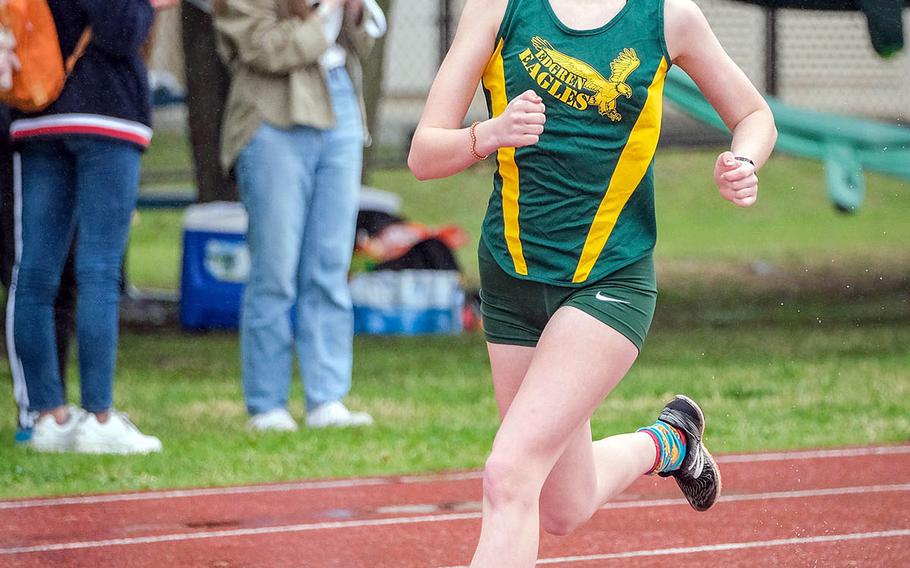 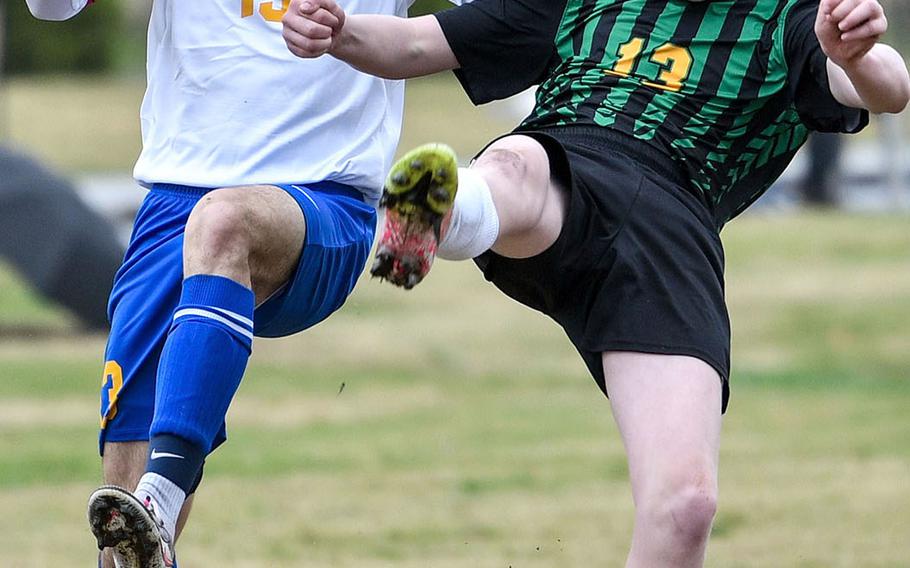 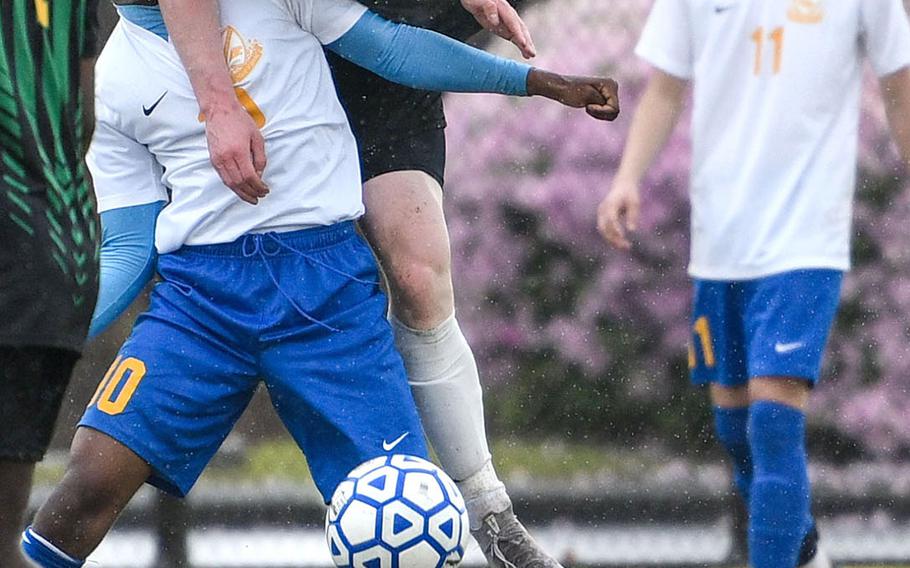 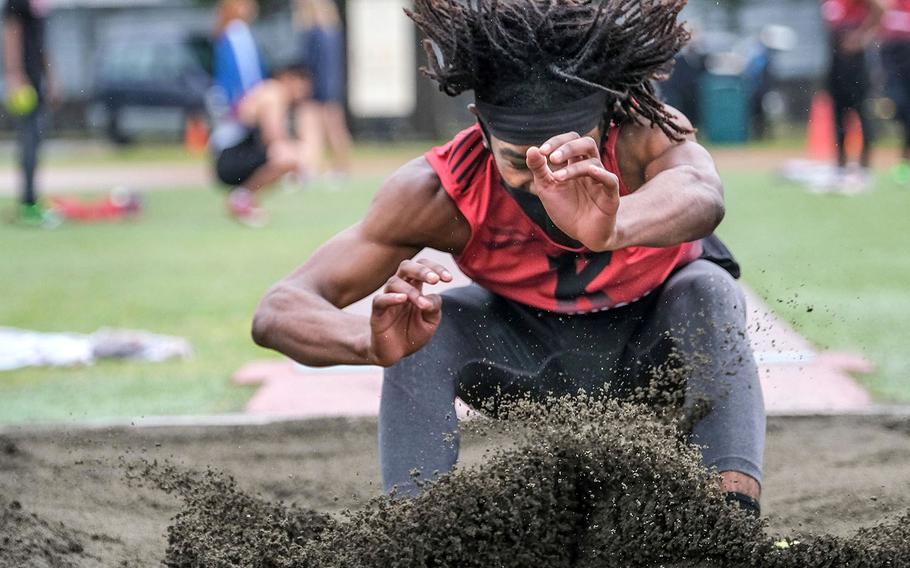 They drove nine hours on a bus each way from Misawa to Yokota and back. They slept on Yokota High School’s gym floor. And they competed in day-long rain at Yokota’s Bonk Field.

Robert D. Edgren track and boys soccer coaches and players said they could not have been happier just to compete against schools they thought they wouldn’t see this spring due to the coronavirus pandemic.

“It was a very rewarding day,” Eagles track and field coach Tim Schwehr said. “It’s been so long, being cut off from the rest of the world at Misawa. To be able to compete and really put purpose behind all the training was worth it.”

The Eagles track team went up against host Yokota, Zama and Nile C. Kinnick, while the boys soccer team played two matches against the host Panthers, losing 9-1 and 6-0 on the school’s grass pitch.

It was the first competition for Edgren sports teams this spring, after losing the entire 2020 spring season to the pandemic. DODEA headquarters gave the OK for Edgren’s teams to travel late last week.

“The traveling part is always hard, and with COVID, it stresses people out even more,” Eagles senior midfielder Ethan Hovenkotter said, using the name of the disease caused by the coronavirus. “But with all of that and the result, we were still happy just to play one last time.”

Watching his track athletes warming up, Schwehr said he noticed now their excitement ramped up as the track meet began. “It really energized them for their own races,” Schwehr said.

One of the marquee events of the day was the girls 1,600-meter run, featuring the top two Far East virtual cross country meet finishers, Yokota’s Reagan Cheramie and Edgren’s Morgan Erler, and the 2019 Far East champion Aiko Galvin of Yokota.

The three runners turned it into a match race, leaving the field far behind, and played leapfrog through three laps until Galvin turned it on at the end, winning in 5 minutes, 36.20 seconds.

It was a race that any of the three could have won, Schwehr said. “She (Erler) got boxed in a couple of times, but we know what we need to work on,” he said.

Galvin continues to work her way back into shape from a hip flexor injury, her father and coach Dan Galvin said. “She’s getting there. She has a long way to go,” he said.

Kinnick won the boys and girls meet’s team point standings, while Yokota came in second. Edgren’s girls had 32 points and the boys 18.

Next up for Edgren are its girls soccer, softball and baseball teams playing Saturday at Yokota.

Humphreys captures DODEA-Korea track finalsAt Camp Humphreys, the host Blackhawks’ mix of veterans and young athletes helped them capture the boys and girls titles in the first DODEA-Korea track and field finals since 2019.

“We’ve had some surprises that have helped our team this season,” Blackhawks coach Mark Tyler said of freshman sprinter Aneres Peoples, freshman middle distance runner Javon Foreman and others who have complemented returners such as Alaina Areniego, Freedom Cody, Jewlya Arrington and Ethan Elliott. All won events during Saturday’s meet.

“They have really provided the components that have allowed our team to be competitive in certain events this season,” Tyler said.

Humphreys’ Isaac Robinson swept the boys hurdles, transfer Darnell Wilks won the 100 and 200 and he helped the Blackhawks sweep the relays. Arrington and Elliott each won the throwing events and Cody took the 400.

Earlier Saturday, Daegu held Humphreys senior Arielle Stickar to just a penalty-kick goal in a 1-1 draw. The Blackhawks finished second in the season standings at 3-2-1.

“She was very successfully shut down,” Daegu coach Austin King said of Stickar, who rebounded with a hat trick to boost Humphreys past Osan 5-0. “We had very high time of possession and were on their (Humphreys’) half of the field most of the game.”

On the diamond, Maddie Mihalic helped pace the Warriors to their second straight DODEA-Korea title.

Maddie Mihalic batted 3-for-5 with two doubles and five RBIs as Daegu downed Osan 7-2 and edged Humphreys 8-6 in the regular-season finales. Bethani Newbold struck out a combined 13 batters in the two games.

Osan struck for four runs in the fourth inning to rally past Humphreys 11-10. Daegu finished 4-2, Humphreys 3-3 and Osan 2-4 in the standings.

On the boys pitch, Humphreys completed an unbeaten regular season, getting four goals each from Austin Mills and Isaac Lee to rout Daegu 7-0 and Osan 7-1. Mills finished the regular season with 14 goals to lead all scorers in Korea, one ahead of Stickar’s 13.

Kinnick strikers stay unbeatenRain was the winner Saturday on Japan’s diamonds; E.J. King’s baseball and softball games at Matthew C. Perry were called off as was Kinnick and Yokota’s baseball teams at Zama due to a forecast of bad weather.

Only Yokota’s and Kinnick’s softball teams managed to play, with the Panthers outlasting drizzle to rout the Red Devils 29-5 and 22-6.

Elena Haas went 8-for-10 and stole 12 bases, Annalise Rodriguez had two homers and 10 RBIs and Erica Young homered twice, tripled and drove in six runs for the unbeaten Panthers, who got huge production all through the lineup.

Coach Casey Rodriguez says the Panthers are looking forward to playing Edgren “to put our skills to the test even more.”

On the pitch, the Red Devils boys won once and girls two times to stay unbeaten. Joey Hand scored four times in the boys’ 8-0 win at Zama and Natsumi Elmoutawakel and Charley Lau each scored three times as the Red Devils downed Zama 4-1 and Yokota 5-2, also at Zama.