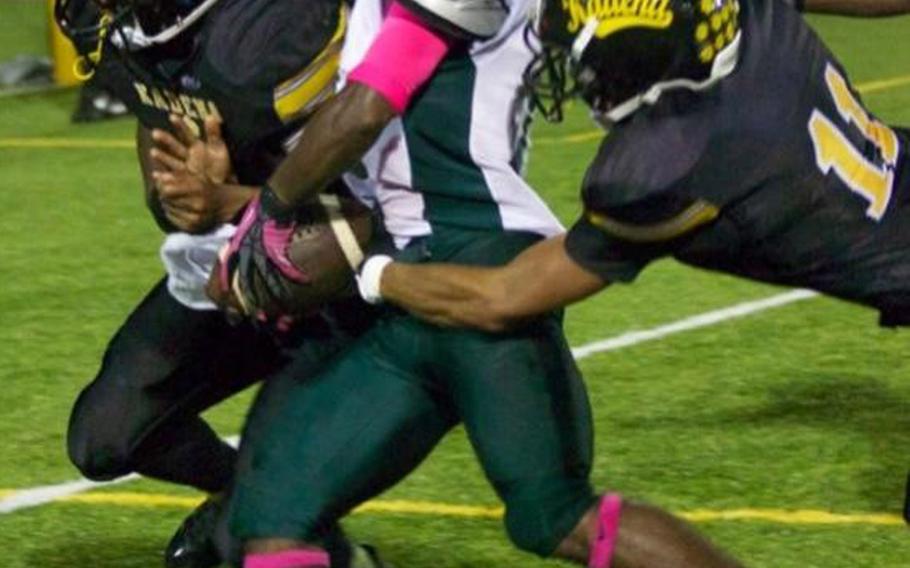 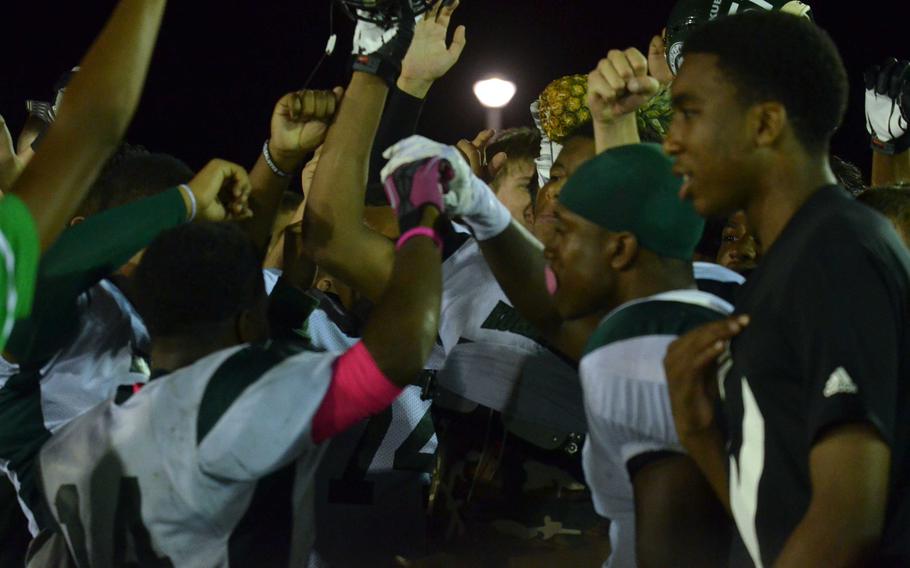 A scrum of Kubasaki players, coaches, fans and parents celebrate after beating Kadena 15-8 on Thursday at Kadena Air Base, Okinawa. (Dave Ornauer/Stars and Stripes) 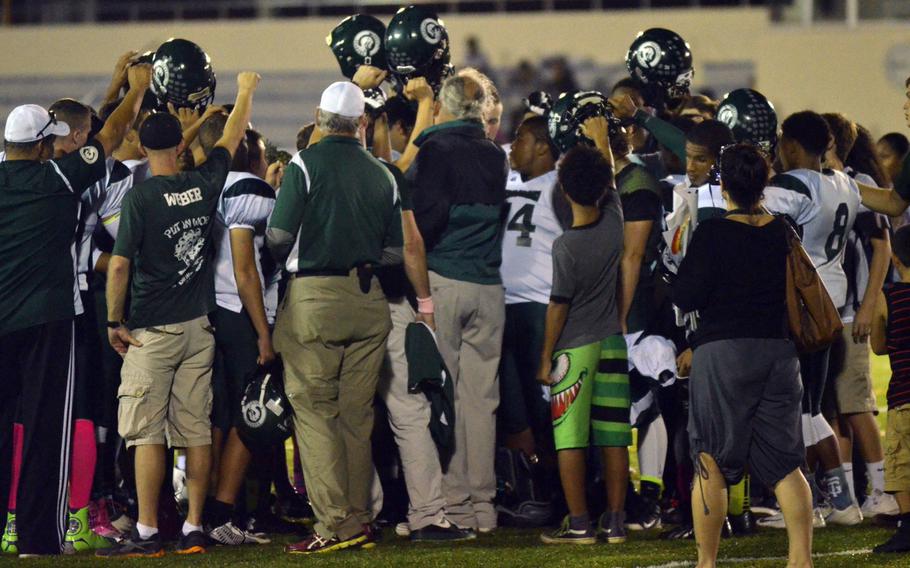 A cluster of Kubasaki players, coaches, fans and parents celebrate after beating Kadena 15-8 on Thursday at Kadena Air Base, Okinawa. (Dave Ornauer/Stars and Stripes)

KADENA AIR BASE, Okinawa – Dinged up wrist? Ankle sprain? Winston Maxwell shook off both like they were little more than a petty annoyance and helped keep Kubasaki’s hopes of defending their Far East Division I football title alive.

But it was Maxwell who did much of the heavy lifting, particularly in the late going. Noticeably favoring his left leg, injured early in the fourth quarter, with his wrist hurt earlier, Maxwell carried the ball time and again down the stretch, gaining 168 total yards on 27 carries.

“His heart, his spirit, his determination, his grit (are) bigger than this stadium we’re standing in,” coach Fred Bales said of Maxwell, his senior running back. “The term ‘refuse to lose’ comes to mind. He has that indomitable spirit that keeps us going.”

And kept intact Kubasaki’s shot at winning its second straight D-I title, in a complicated scenario in which despite the two losses this season to the Dragons, the Panthers remain alive along with Nile C. Kinnick.

Kubasaki and Kadena play five D-I games this season; the D-I schools only play four that count. The Panthers and Dragons faced each other twice this season to earn the equivalent of one D-I win, which Kubasaki earned. The Dragons and Panthers thus have one D-I loss and Kinnick none.

So it comes down to next Saturday’s Kinnick at Kadena game to determine which team hosts and which team visits for the Nov. 8 D-I title game. Kinnick could seal host rights and eliminate Kadena with a win. A Kadena victory would have DODDS area officials scrambling to add up points in all games Kadena, Kubasaki and Kinnick played against all D-I foes.

“A lot of this stuff is not in our hands,” Bales said. “So we just have to wait and see what happens.”

The teams struggled to put points on the board in a game played in gusty winds and spot showers caused by approaching Super Typhoon Vongfone. Kadena backs struggled to hang onto the ball, fumbling six times, two of them leading to Kubasaki’s touchdowns.

A fumble recovery by Preston Snyder and a 12-yard return set up Davis’ 1-yard TD run 8:51 before halftime. It appeared the ball was fumbled into the end zone, but officials said Davis had crossed the plane of the goal line before losing control.

Following a missed Kubasaki field-goal try, Kadena took over and Justin Sego, with 54 yards on eight carries, led a 10-play, 80-yard drive in 3:45, capped by quarterback Jamario Harris’ 2-yard TD sneak. He also ran for the two-point conversion to give Kadena a brief 8-7 lead.

Kubasaki’s D-I schedule is complete. The Dragons host Singapore’s youth All-Star team on Oct. 20, then complete their regular season on Oct. 24 against American School In Japan. Kadena’s last regular-season game after Kinnick is against Singapore on Oct. 24.