Daegu will get chance to defend title 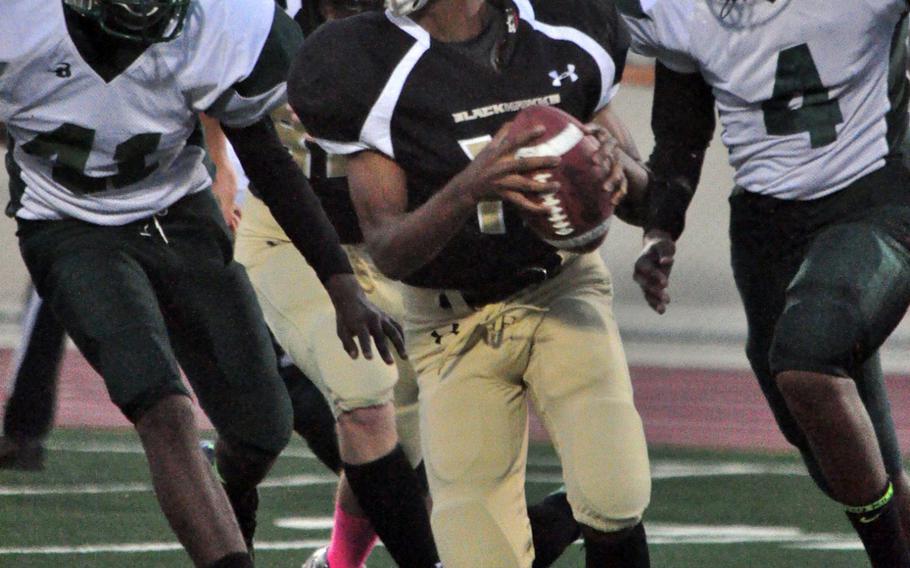 Daegu's Hasan Hanslip gets hemmed in by Humphreys' Carlos Hernandez and Dai'Quan Wilson. (Celine Jao/Special to Stars and Stripes)

CAMP HUMPHREYS, South Korea – DeAndre Rosalie used his legs and his arm to account for three touchdowns on Friday. As a result, the junior quarterback and Daegu are headed to their sixth Far East Division II championship game.

DeMarco Andrews scored two rushing touchdowns and the Warriors scored on all five possessions to shut out Humphreys 32-0 in a game called off at halftime due to the score and that the Blackhawks, already short-handed entering the game, lost a handful players to injury.

Humphreys was only able to dress 20 for the game, and discussion on Thursday was whether to take the field at all.

Coach Aaron Mundy described the week leading up to the game as a “perfect storm” of injury and other issues that sidelined some of his players.

“We were so short, we almost canceled yesterday; in hindsight, maybe we should have,” Mundy said, adding that in his 20 years of coaching football, “I’ve never had that happen to me. I didn’t have a team ready. We should not have taken the field.”

Humphreys (2-3) bottled up the middle on defense, which kept Rosalie and Andrews from exploiting the inside, so they turned to zone reads, traps and pass plays, Walter said. And the Warriors had enough troops that they didn’t have to do any iron-manning.

“It’s nice to have that luxury,” Walter said. “First time we didn’t have to play guys on both sides and the defense was lights out.”

Now the Warriors plan to focus on getting ready for the D-II title game. Walter said Daegu will rest some regulars who are banged up during their remaining regular-season games next Friday at Osan, Oct. 17 at Seoul American and Oct. 24 vs. Humphreys.

“Anybody dinged up or questionable is not going to play,” Walter said.

Humphreys is off next week and hosts Osan on Oct. 17.