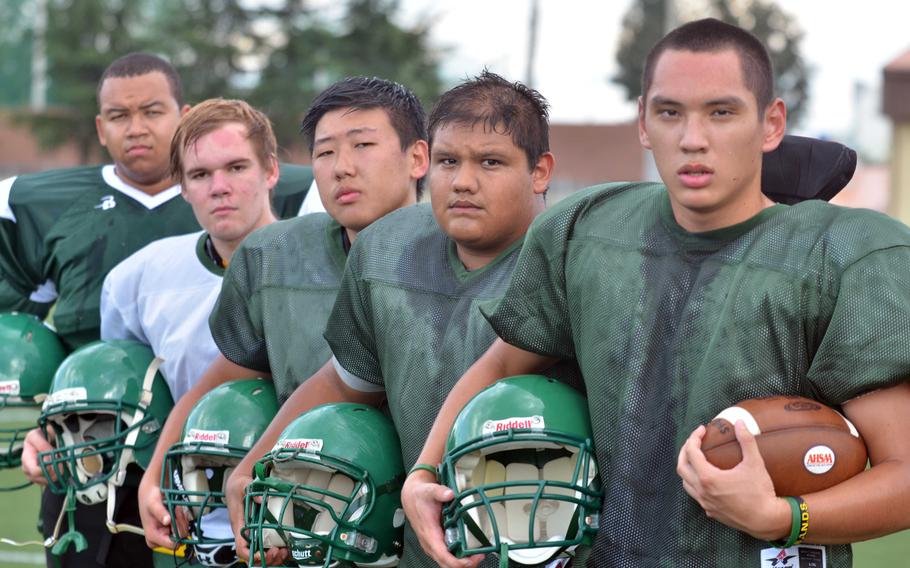 On Daegu's thin roster, just four players, from left, Houston Graves, Taylor Mendenhal, Bryon Kim and Miguel Cardona fit the template of the prototype lineman, and Mendenhal is making the move from fullback tp line. At right, Zach Fowler, who played tight end and linebacker a season ago, is being asked to move to center. (Dave Ornauer/Stars and Stripes)

CAMP WALKER, South Korea – Rather than view his team’s season schedule - more limited in the number of games and level of opponents than in years past - as a negative, coach Ken Walter says he plans to accentuate the positive.

And look to do something no Pacific Division II team has ever done. “If we can get things going with the kids we have, we have a shot at an unbeaten season,” Walter said. “It’s something to shoot for and turn it into a positive. Establish goals.”

Gone are the days when Okinawa Division I teams dotted the Warriors’ schedule, and they’ll only face Seoul American once this season while playing Osan and Humphreys three times each. That puts Daegu right at the seven-game cap, which all teams will play this season. The move was made to reduce costs of travel by DODDS Pacific high school teams.

Walter says he holds a mixed view of the situation, acknowledging budget realities, but at the same time not happy with losing games with opposition that helps the Warriors ramp up their game.

“Everybody understands that money is tight,” said Walter, who also serves as the school’s athletics director. “But the answer is to spend 100 percent of the travel money on Division I and zero percent on Division II? Why should we play this type of schedule while D-I travels?”

He feels that the Korea D-II schools in particular take a bigger hit than their Japan counterparts.

So the Warriors will soldier on, with fewer numbers and a line down in size from last year. Only four players, Miguel Cardona, Bryon Kim, last year’s fullback Taylor Mendenhal and senior transfer Houston Graves fit the lineman profile. Tight end-linebacker Zach Fowler will be asked to play center.

As thin as he is in numbers (26 are on the roster), Walter says he does have 16 starters to this point, and plans to play younger players “so I’m not ironmanning, that I’m platooning as much as possible.”

But in addition to staying ready, the Warriors must stay healthy. “Our best 11 can play with anyone,” Walter said. “It’s when we get down to 15 or 16 we get in trouble. We just have to hope the other D-II teams are in the same boat.”

As to that dream of a school-first and D-II-first unbeaten season, Walter acknowledges that it’s easier said than done. “We have to get by Seoul American and win the D-II championship first,” he said.