Daegu hoping it has quality to top quantity 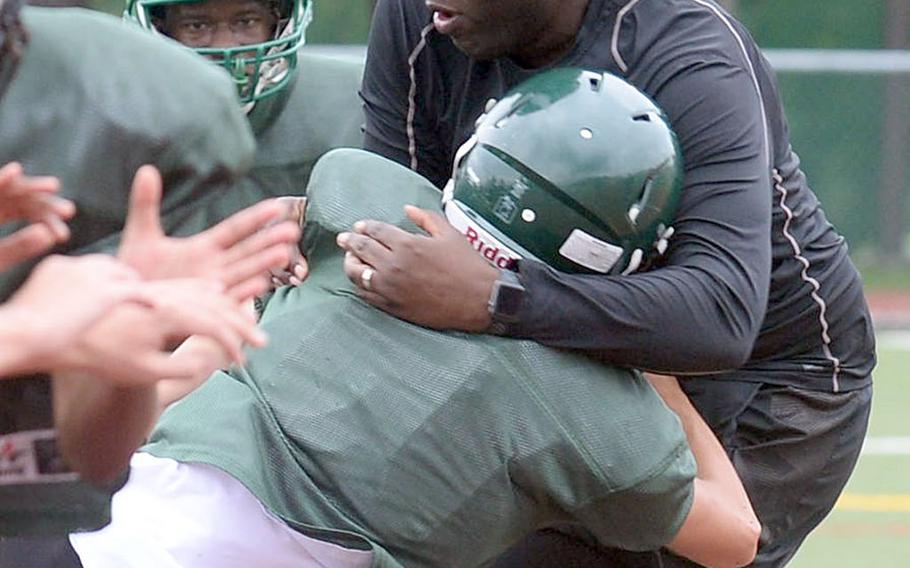 In a battle of Daegu big boys during practice, Andrew Neloms and Jordan Clement square off at the line. (Katrina Vasquez/Special to Stripes) 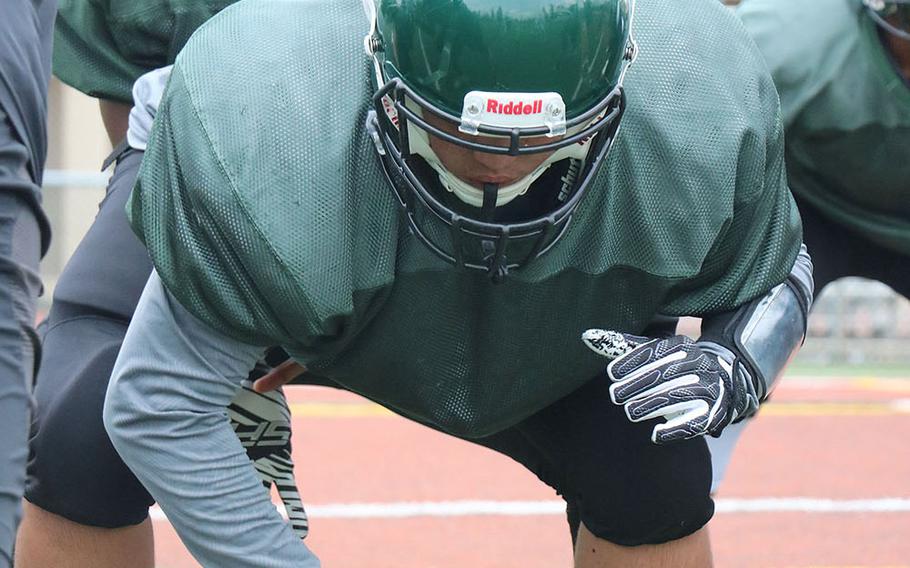 Twelfth in a series of DODEA-Pacific high school football previews. CAMP WALKER, South Korea – Jonathan Van and Daegu’s football team could be forgiven if they hid behind the fact that they only have 15 players.

But that’s not Van, nor is it the Warriors, said the team’s assistant coach. He’s one who believes it’s not the amount of the dogs in the fight, but the amount of fight in the dogs.

“If we can convince them that it doesn’t matter how many players we have, if we can play every down from the first through the fourth quarters, then we’re there. We’ll have it,” Van said.

Though the Warriors have some size, including two linemen who check in at over 300 pounds, as well as some quickness among special-teams players, a good three-fifths of the roster is underclassmen.

Still, nearly one-third of the total boys student enrollment at Daegu is out for football. And Sims says there’s enough potential among his youngsters that could lead to more glory for the record holder of Far East titles among Division II schools.

“We have a good core group of freshmen who came in wanting to play,” Sims said. “If the freshmen stay a few years, we could build something like we had a few years ago.”

But unlike those glory days when Sims arrived in 2015 in Daegu in time to see the Warriors win a third straight D-II title, Sims says the current Warriors don’t have the leaders to carry the team on their shoulders.

“We don’t have a prime person yet,” Sims said. For that reason, “everybody’s going to get a lot of looks.”

And the Warriors will get a lot of looks at teams they haven’t normally seen, in games that have not usually counted in the chase for Division II title game space.

DODEA-Pacific has molded D-II into a similar format as D-I: The team with the best win-loss record hosts the final and the second-place team does the traveling. Daegu will play all D-II teams in both Korea and Japan at least once this year, including defending champion Osan twice.

“It will be different across the board,” Sims said. “It’s going to be a real, true Division II.”

Japan’s D-II teams have all opted to play 11-man format, but will accommodate the Korea teams whether home or away by pulling two players on both offense and defense to match the Warriors and Cougars.

Playing nine-man will make the difference this season for the Warriors, Sims said. Daegu had to play some 11-man games with as few as 13 players last year.

“I’m glad they gave us the option” to go nine-man, Sims said, adding that even if the Warriors had 18 or 20 players, they would have asked to go nine-man. “If we had to play 11-man this season, we might not have had a team.”