Coach looks for good Marines on the mat 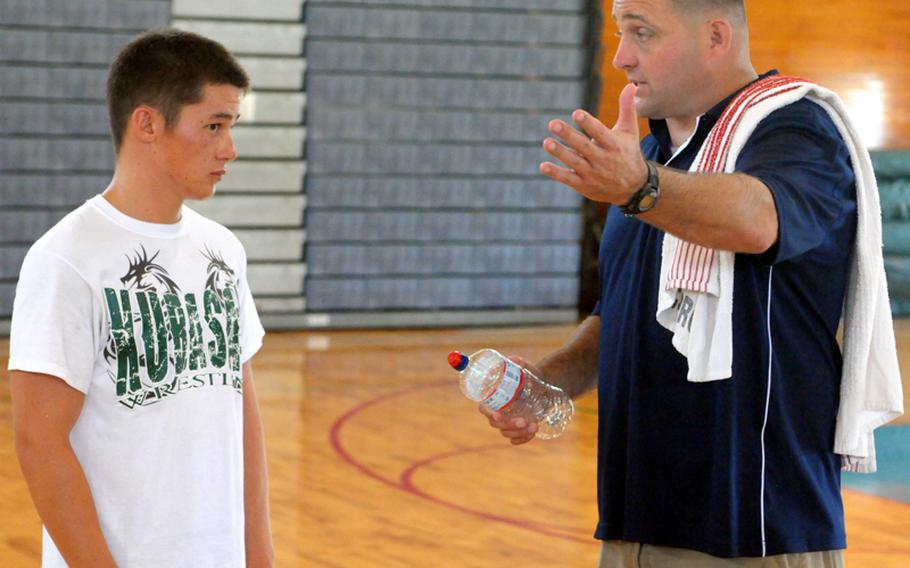 Buy Photo
All-Marine wrestling coach Dan Hicks chats it up with Kubasaki High School senior 129-pound wrestler Kevin Orr during a break in the action of Saturday's Camp Schwab Open wrestling tournament. Hicks visited the tournament to scope out potential candidates for inclusion on the All-Marine team, which will wrestle in the All-Armed Forces tournament in November. (Dave Ornauer/Stars and Stripes)

CAMP SCHWAB, Okinawa &ndash; He&rsquo;s turned out seven gold-medal wrestlers in his eight years of coaching the All-Marine wrestling team. But one thing Dan Hicks has not done is end the All-Army team&rsquo;s stranglehold on the All-Armed Forces tournament team titles since 2001.It&rsquo;s something that brings Hicks to Okinawa at least once a year to scope out potential candidates for the All-Marine team. That was the case Saturday when Hicks attended the Camp Schwab Open Tournament, where he watched 80 American and Japanese wrestlers go at it for eight hours.&ldquo;Usually, I figure we&rsquo;ll get at least five (from Okinawa) per year,&rdquo; said Hicks, who has five Okinawa-based Marines on the team right now, and had seven a year ago.&ldquo;I wouldn&rsquo;t come here if I didn&rsquo;t. It&rsquo;s a long fight,&rdquo; he said.All over the world Hicks travels, scouring the East and West Coast regions as well as overseas locales ranging from Japan to Romania, either scouting or seeing how other military forces conduct their teams.Sure, he says he wants to find the best international freestyle and Greco-Roman talent he can. But there&rsquo;s one thing he insists is more important &ndash; recruiting Marines. And wrestling mats are a great place to find them, Hicks says.&ldquo;They&rsquo;re disciplined, tough, hard-nosed &ndash; those characteristics also make good Marines,&rdquo; Hicks said. &ldquo;Wrestlers make good Marines.&rdquo;Therein might lie the difference between the way the Army and Marines do wrestling business.The Army selects and takes applicants into its World Class Athlete Program, where they train a minimum of two years at Fort Carson, Colo., near the Olympic Training Center.Most noteworthy among that lot is Dremiel Byers, who joined WCAP in 1996. He's a multiple Armed Forces and international champion and made the U.S. Olympic team for the 2008 Summer Games in Beijing.But while the Army may recruit soldiers to be wrestlers, Hicks says his wrestlers are Marines first &ndash; he recruits wrestlers to be Marines.&ldquo;Every one of our 19 All-Marine wrestlers has been deployed to a combat zone,&rdquo; said Hicks, noting that Army WCAP wrestlers don&rsquo;t deploy in a similar fashion. &ldquo;The Army does things the Army way. We do it the Marine Corps way.&rdquo;And unlike the Army, which also sends its WCAP teams to local Colorado high schools for recruiting purposes, Hicks feels that he stands the best chance of recruiting All-Marine wrestlers at tournaments like the Schwab Open.&ldquo;We like to feel we are the definition of Marine Corps athlete,&rdquo; Hicks said.He did make time to chat it up with one high school wrestler who participated in the Schwab Open. Kevin Orr is a senior who plans to wrestle at 129 pounds this school year for Kubasaki, the most decorated program in Far East tournament history.ornauerd@pstripes.osd.mil