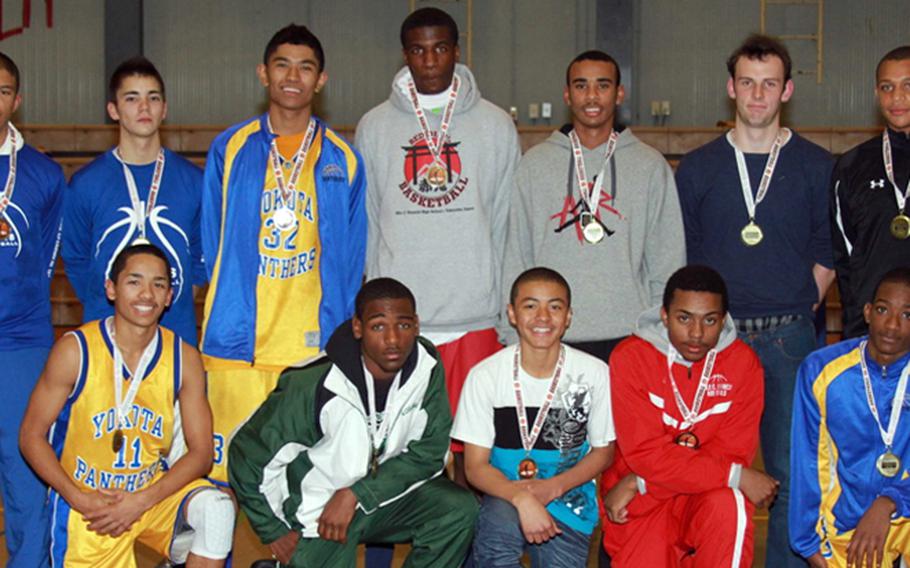 The all-tournament basketball team after claiming the title in the 2013 New Year Classic basketball tournament. (Dave Ornauer/Stars and Stripes)

The all-tournament basketball team after claiming the title in the 2013 New Year Classic basketball tournament. (Dave Ornauer/Stars and Stripes) 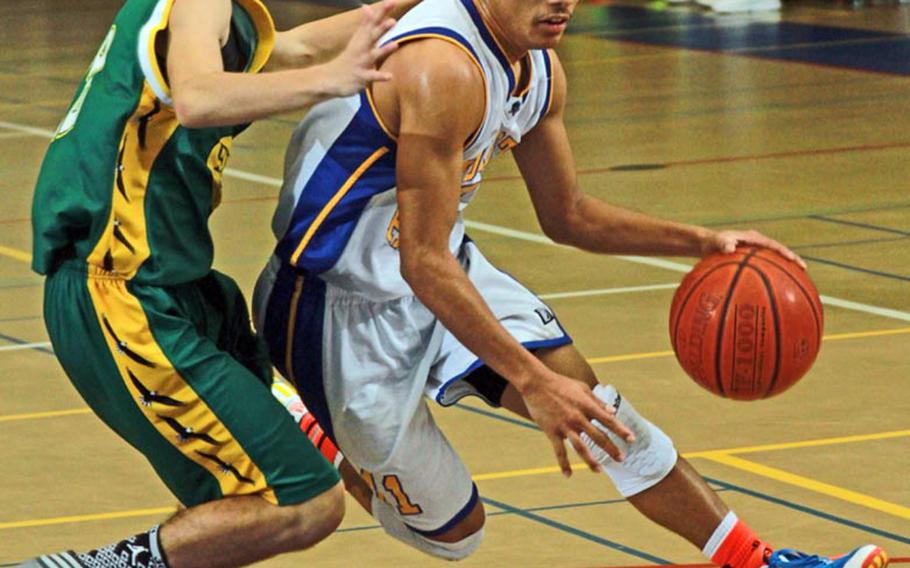 YOKOTA AIR BASE, Japan &ndash; For a heralded running back, Morgan Breazell is proving to be more than fair at handling a basketball as well.

The senior point guard scored eight of his 19 points in the final 5:40, rallying Yokota from a six-point deficit for a 49-47 win Saturday over Christian Academy Japan and the Panthers&rsquo; second New Year Classic basketball tournament title. The tournament MVP also had five assists.

Breazell was one of the key cogs in a Yokota football team that won its second straight Far East Division I title on Nov. 17, capping a season in which he rushed 111 times for 1,056 yards and 15 touchdowns.

Saturday&rsquo;s title outcome was a far cry from the first time the teams met in the three-day tournament, a 54-31 romp by the Panthers over the Knights in pool play. CAJ led Yokota 12-6 after one quarter before the Panthers outscored the Knights 35-7 over the next two quarters.

&ldquo;CAJ, in my opinion, is one of the best teams at improving as time goes by,&rdquo; Ettl said. &ldquo;They&rsquo;re a totally different team at the end of each season, and their learning curve in this tournament was such that the team they were on Thursday is not the team they are today.&rdquo;

The Panthers won Saturday&rsquo;s game despite shooting just 21-for-55 from the field and 5-for-13 from the line. The latter discipline plagued teams throughout the tournament; the eight teams combined to go 352-for-651, 54 percent, in the event&rsquo;s 24 games.

At the outset of the title game, it looked like a Yokota runaway. Ke&rsquo;Ondre Davis scored with 6:50 left in the first half to cap a 13-0 run which gave the Panthers an 18-5 lead.

But the script changed after that. Coach Craig Eby and the Knights slowed the pace and put a defender on Breazell in a &ldquo;box-and-one&rdquo; zone defense. &ldquo;It made it harder to score,&rdquo; Breazell said. &ldquo;I knew they were going to pressure us. It was kind of scary.&rdquo;

&ldquo;The first time we played, they got three turnovers in a row, they gained momentum and we fell apart,&rdquo; Eby said. &ldquo;This time, we wanted to control the tempo and obviously try to stay on him (Breazell).&rdquo;

Slowly, the Knights chipped away, outscoring the Panthers 36-17 over a 17-minute span and leading 41-35 with 5:40 left on a three-point goal by Eliot Reasoner, who finished with a game-high 23 points.

Breazell then took over, scoring twice, then tying it 43-43 on a foul shot with 2:10 left. Davis&rsquo; rebound lay-in with 1:50 left gave the Panthers the lead for good 45-43. CAJ had one last chance, but Miles Miller, who finished with 16 points, missed a three-pointer at the final buzzer.

Though CAJ didn&rsquo;t win in its first finals appearance in a Pacificwide tournament in 15 years, the Knights at least got to play on the NYC&rsquo;s final day; in years past, the tournament ended on Sundays. School policy doesn&rsquo;t allow its sports teams to play on the Christian Sabbath.

&ldquo;It was nice to be able to finish it out and be in it,&rdquo; Eby said.

Yokota won its first NYC title in December 2008, when it beat American School In Japan 46-38 at Yokosuka Naval Base.