Blazing times as Kanto athletes gear up for Far East 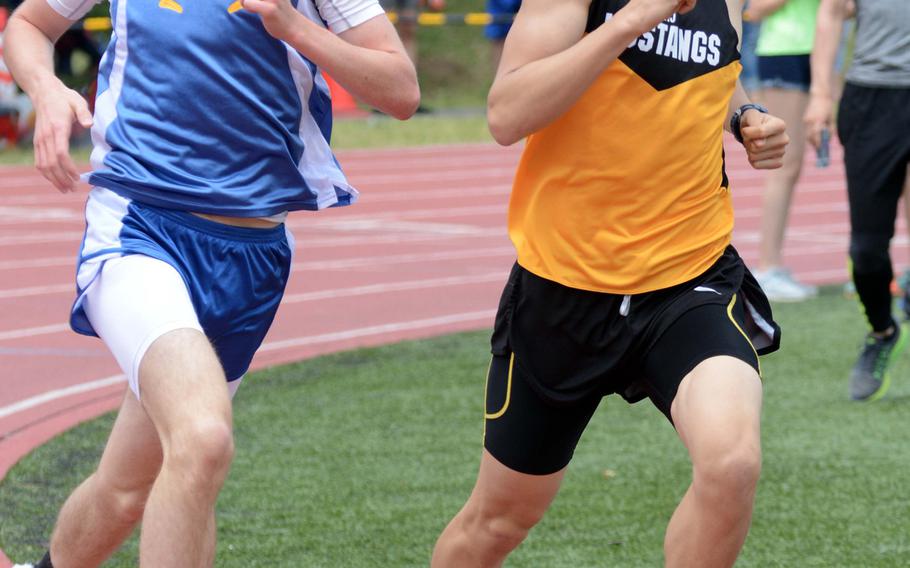 Seniors Daniel Galvin of Yokota and Evan Yukevich of American School In Japan run side-by-side in the 1,600 during Saturday's Kanto Plain finals. Galvin ran 4:18.22 to regain the record from Yukevich, who ran 4:21.64 in March at Zama. (Greg Holladay/Special to Stars and Stripes)

Seniors Daniel Galvin of Yokota and Evan Yukevich of American School In Japan run side-by-side in the 1,600 during Saturday's Kanto Plain finals. Galvin ran 4:18.22 to regain the record from Yukevich, who ran 4:21.64 in March at Zama. (Greg Holladay/Special to Stars and Stripes) 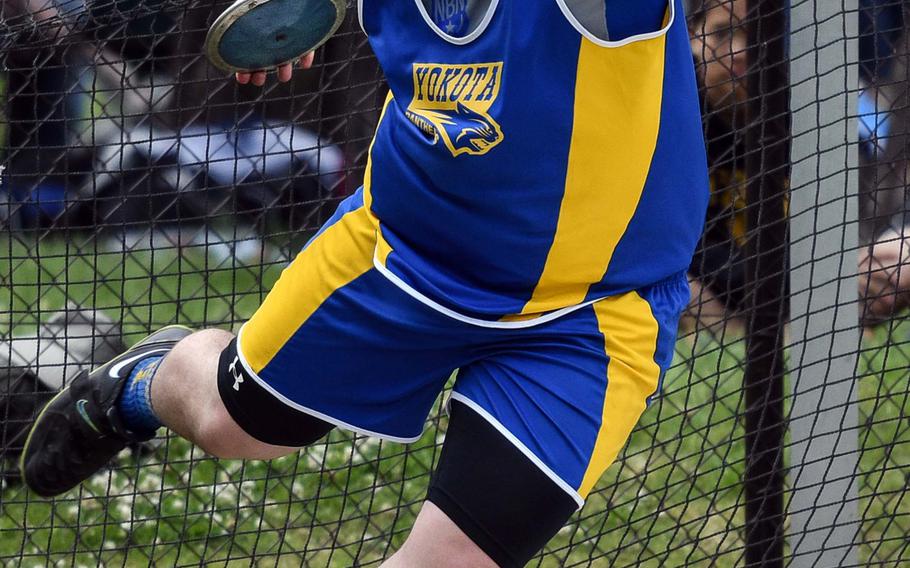 Northwest Pacific discus record-holder Christian Sonnenberg, a Yokota sophomore, won the event in Saturday's Kanto finals with a throw of 53.5 meters, just under three meters short of his region record 56.4. (Jack Higbee/Special to Stars and Stripes) Kinnick's Dwayne Lyon finished second in the long jump with a leap of 5.7 meters. (Jack Higbee/Special to Stars and Stripes) 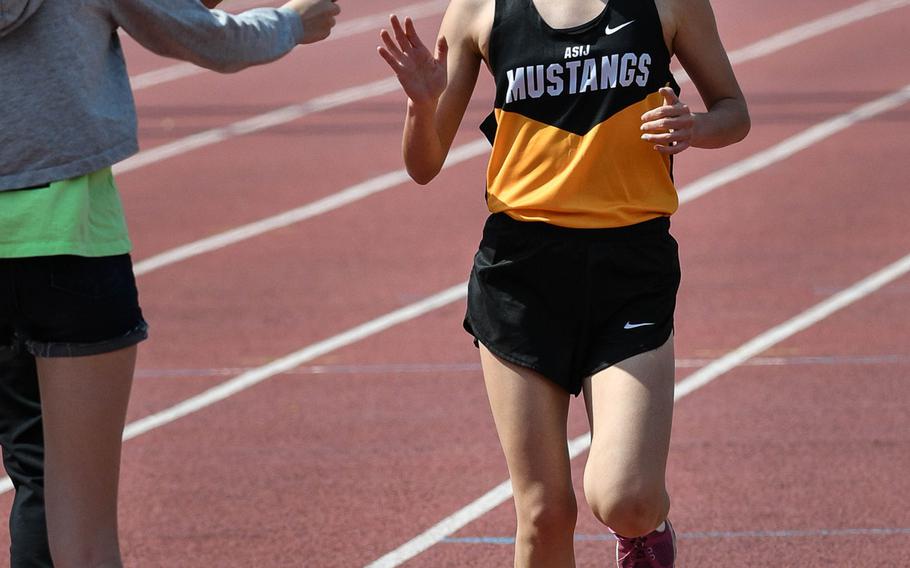 Leading off Saturday’s record-book run was Yokota senior Daniel Galvin, who reclaimed the northwest Pacific mark in the 1,600 with a 4:18.22, breaking the mark of 4:21.64 set earlier this season by American School In Japan’s Evan Yukevich.

“It was a big day today for everyone,” Galvin said.

“This year really is insane in terms of times,” Yukevich said.

Many of the teams and athletes ran Saturday with one eye toward the Far East meet scheduled next Thursday and Friday. Some, like Galvin, chose to run just one event.

“We didn’t want to wear out our athletes so close to Far East,” Kinnick coach Luke Voth said. “But the events they did run, they ran well.”

Johnson entered the season as the region record holder in the 100, 200 and 400, and rebroke those three marks earlier this season.

“I probably wouldn’t have done it without running against Britt,” Johnson said. “I was aiming for a 47, but I was happy with my performance.”

Kinnick topped the old 400 relay of 43.59 set two years ago by Kubasaki, and Johnson said that had been the team’s goal throughout the week. “During practice, our mindset was to chase the record,” he said. “We definitely didn’t expect to go that fast.”

Having had a bit of down time since the last league competition on April 27 had something to do with it, too, Johnson said. “It was just a result of us … not having meets for a while; we just needed an opportunity to display how we’ve developed. And we definitely did.”

He met one of the two goals on Saturday, and reversed the tenor of the March race at Zama in which Yukevich captured the record. Then, Galvin led most of the way before Yukevich caught him in the final 100 meters; on Saturday, it was the other way around.

“Instead of going out fast with the lead, I hung back in second for most of the race,” Galvin said. “Instead of trying to hold onto the lead … I had a lot left and was able to kick in the last lap with everything I had been holding back.

“I’m just happy I could hit a time that was satisfying to me” after his sub-par junior season, Galvin said. “It’s great to be making strides back to where I should have been.”

Galvin and Yukevich, both seniors, have been running against each other since their middle-school cross country days. “When we run together, we run fast times; so, it’s great to have such a fast rival like him,” Yukevich said of Galvin.