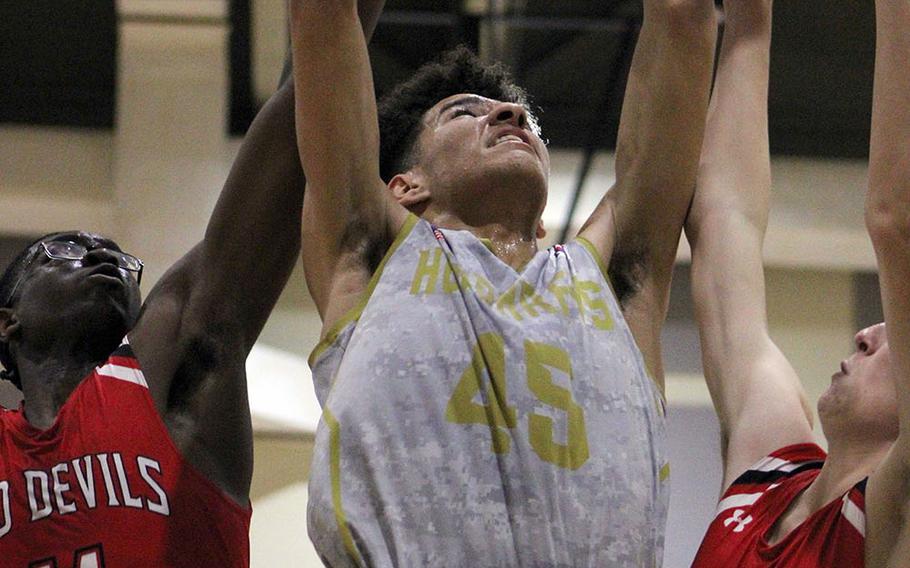 Buy Photo
Collin Metcalf and Humphreys will get a basketball season this school year, a seven-week slate starting Jan. 4 and ending with the DODEA-Korea district finals on Feb. 19. (Krystal Duenas/For Stars and Stripes)

High school basketball will be played on U.S. bases in South Korea after all.

In a Facebook post from district superintendent Jeff Arrington, DODEA-Korea announced late Friday that it is planning to stage a seven-week basketball season for Daegu, Osan and Humphreys high schools starting Jan. 4 and ending with the district championship Feb. 19.

“At this time, local environmental conditions and military health officials (in Korea) support the addition of a basketball season,” Arrington’s post stated.

It went on to say that the district has been “closely coordinating with military officials to identify moderate-risk activities” as categorized by the National Federation of State High School Associations that can be supported with mitigation strategies based on local conditions.

DODEA-Pacific chief of staff Todd Schlitz said the military command and the Korea district in a “joint initiative” submitted a plan early this week that was “vetted and approved” by DODEA-Pacific on Thursday.

Several weeks ago, DODEA-Pacific announced its intention to offer just two interscholastic athletics seasons, fall and spring, with basketball and wrestling off the table for the 2020-21 school year.

But from the start of the school year, DODEA-Pacific has left open the possibility that other sports could be added by each district provided the proper plans are submitted and given the OK, Schlitz said.

DODEA-Korea used that process to add volleyball and doubles tennis to its slate of sports offerings. The district’s fall sports season began in late October.

Procedures are in place for the Japan and Korea districts to do the same, Schlitz said. “If an installation supports it and the district endorses it and sends it up the line,” it will be considered, he said.

Originally, DODEA-Korea’s district finals for tennis, cross country and volleyball were scheduled for late January but are now slated for Dec. 18, to allow for students playing those sports to then move on to basketball, Arrington’s post said.

Daegu, Osan and Humphreys will only play against each other and not against Korea’s international schools, who will play their own separate slate starting Saturday and concluding with their district finals in late January.