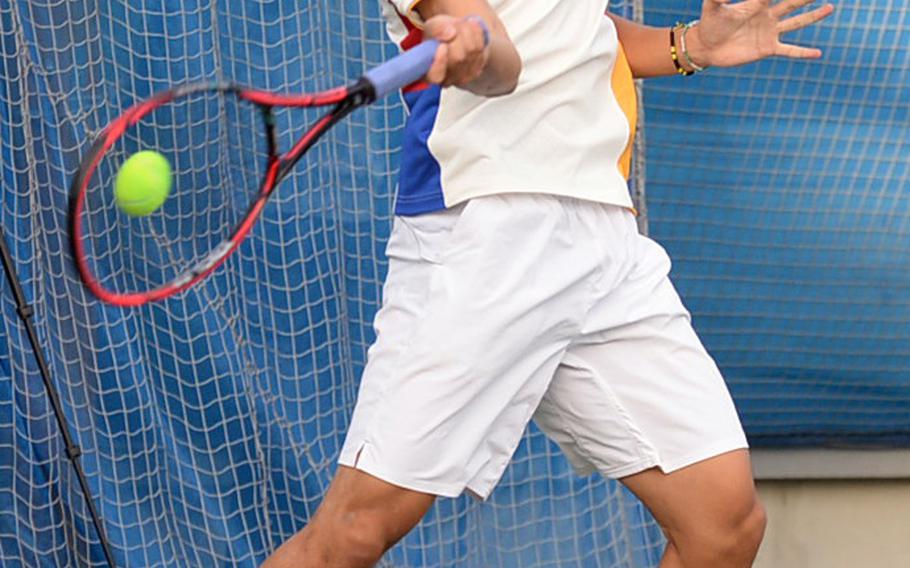 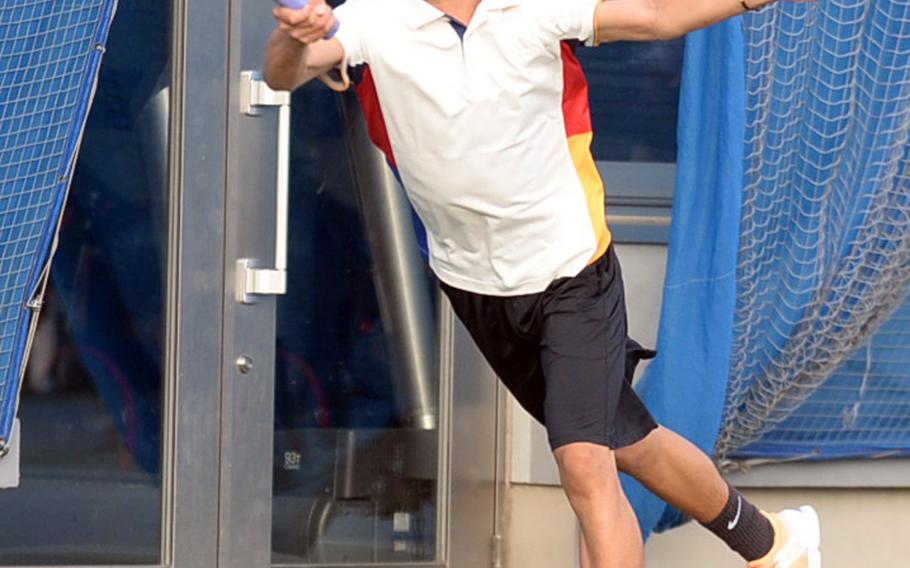 American School In Japan freshman Joshua Inahara lunges for a return in his Far East boys singles final match against his brother, Noah, who won in straight sets 6-3, 6-2. (Dave Ornauer/Stars and Stripes) TOKYO – Call it the tournament without end. At least not yet.

But even then, the Far East tournament, which opened Oct. 25, still isn’t over. The girls singles final was suspended by darkness with ASIJ’s Eriya Hara leading teammate Miley Karasawa 6-3, 1-6, 4-3. Play resumes Saturday morning.

The event began at Kadena Air Base, Okinawa and was shortened to two days by Typhoon Saola. Three final matches were moved to ASIJ’s Chofu campus since all three had Mustangs playing each other.

Inahara played to a one-sided victory over his freshman brother, Joshua, 6-3, 6-2, eight days after the two had teamed on Okinawa to win the Far East boys doubles, and two days after they won the doubles and finished 1-2 in singles in the Kanto Plain finals, also at ASIJ.

“Tired,” Noah told his coach, Jen Brown, after she asked him how he felt coming off the court.

While fast friends when playing doubles, Noah says he views his brother as “just like any player on the court” when playing him in singles.

“We’ve lived together for the last 14 years. But he’s my opponent. I do what I have to do to win. I don’t hold back.”

The two Inaharas went at it power against power, with lengthy ground strokes punctuating most rallies with one or the other occasionally going to the net to volley. Both sets started tight until Noah pulled away in each thanks to unforced errors.

“I need to focus on that,” Joshua said. “He’s a solid player. He takes advantage of my disadvantages and makes his leads off of points I lose. He did well in this tournament. He deserves to win.”

Friday’s mixed doubles win as also the last time Chang will suit up for the Mustangs; she takes home two titles this year, having won Far East doubles eight days earlier while teaming with Hara.

Hoy and Chang, too, had endured the Far East grind, playing six matches each on Oct. 26, then each playing in their respective boys and girls doubles in Wednesday’s Kanto tournament. “And it was after school on a Friday,” Chang said.

While the boys singles and mixed doubles got over in relatively short order, Hara and Karasawa, clinging to the baselines and striking lengthy groundstrokes for long seconds, played for more than two hours until the gloaming of twilight wouldn’t permit any more play.

The players and Brown agreed to resume play at 7 a.m., getting the match done ahead of the Kanto Plain junior varsity tournament, also scheduled for Saturday at ASIJ.