ASIJ tops Kinnick to set up showdown with Kadena 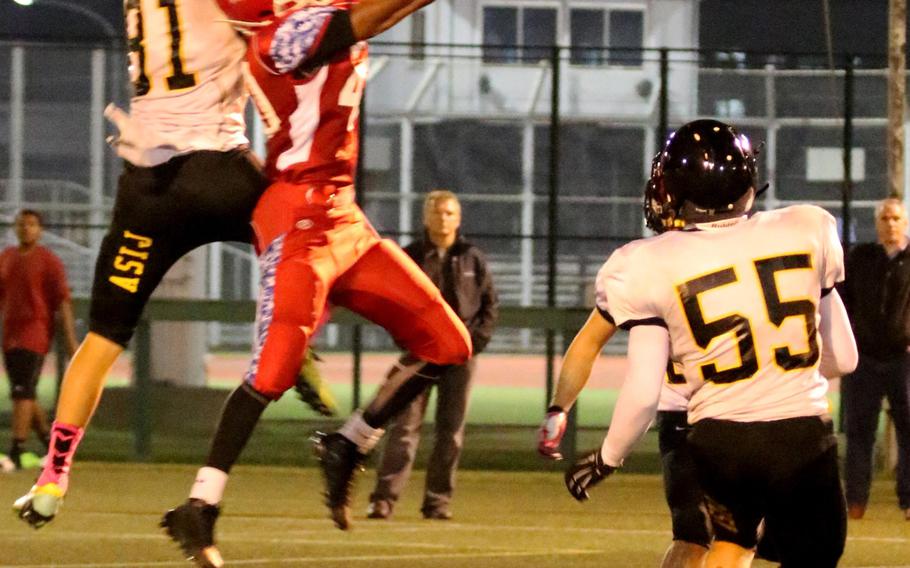 American School In Japan's Andrew Meaney and Nile C. Kinnick's Devoney Stanley go up for a pass. (Devon Venturina/Special to Stars and Stripes)

YOKOSUKA NAVAL BASE, Japan – Henrik Olsson got things started in the first half with two touchdown runs. Ray Hotta finished things off in the second with two of his own. And American School In Japan remains alive in the chase for its first Far East Division I football title.

Hotta racked up 149 yards on 20 carries, Olsson added 78 yards on five attempts and Sho Hatakeyama returned an interception 98 yards for a score to boost the Mustangs over Nile C. Kinnick 38-10 in the Red Devils’ season finale.

Now, the Mustangs (3-4), winners of three straight, need a victory over Kadena to have a chance at playing for their first D-I title. The Red Devils were 3-1, but closed the season with four straight losses.

“We’re getting better every week, getting a lot of big plays from our seniors,” coach John Seevers said, adding that new quarterback Jack Ambrosino continues to fuel the Mustangs’ attack. “He’s got us going again, breathed some life into our offense.”

It was a turnover-filled game, with each side throwing an interception and losing three fumbles, one of which was returned 79 yards by Darius Swenson for the Red Devils’ only touchdown. Hatakeyama also recovered a fumble and Kinnick’s Nick Galegher intercepted a pass and recovered a fumble.

“It just came down to a few mistakes,” Kinnick coach Dan Joley said. “We dug ourselves a hole early, we got a break with that fumble recovery, we just couldn’t keep the momentum through the second half. It was a game of momentum.”

Brad Deibel had 144 yards total offense to pace the Red Devils (3-5), who were officially eliminated from the D-I title chase. ASIJ next faces a road trip to Kadena, with the winner headed to the D-I title game Nov. 7 at Kubasaki. “We’re excited to be playing for the big one,” Seevers said.