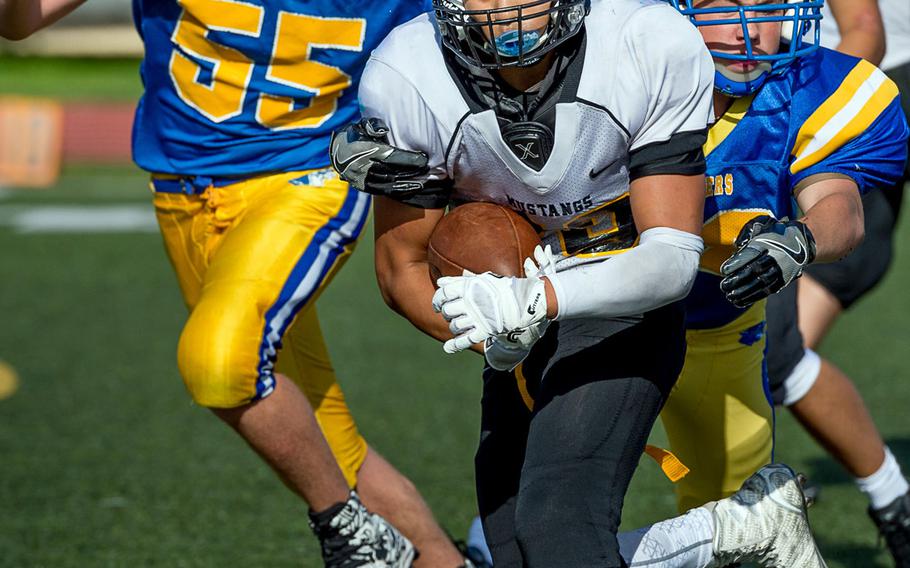 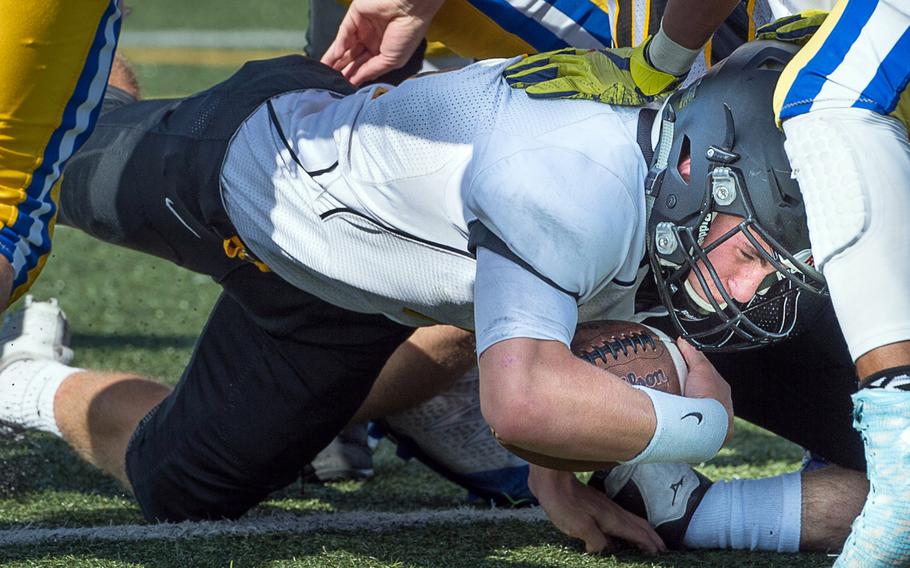 American School In Japan's Jack Ambrosino dives across the goal line on a 1-yard quarterback sneak. (Jack Higbee/Special to Stripes) 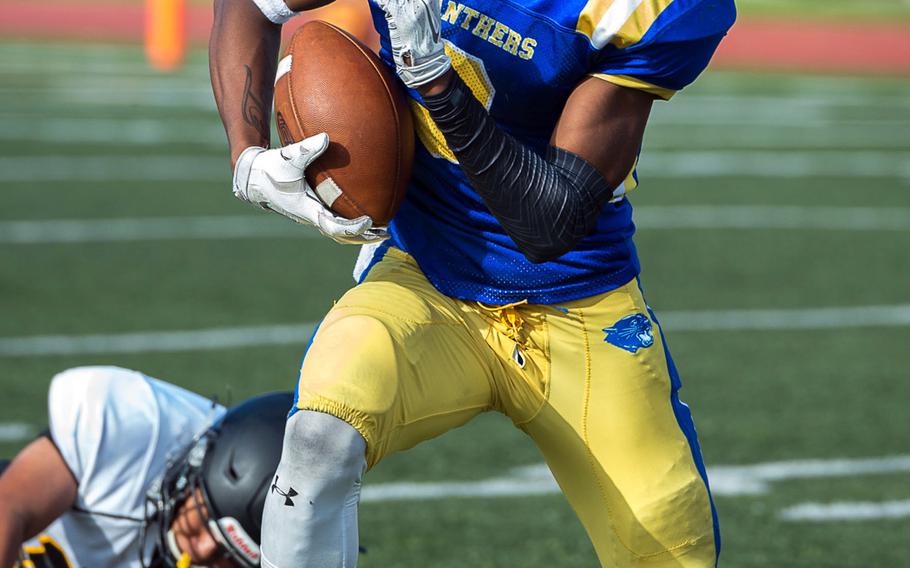 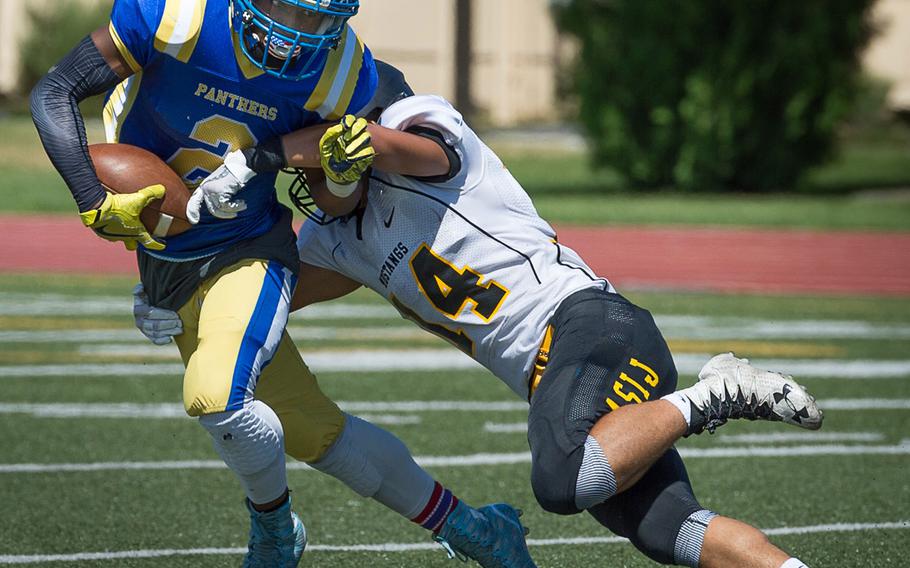 Yokota running back Marquis Smith-Brown is wrapped up by American School In Japan's Andrew Howe. (Jack Higbee/Special to Stripes)

YOKOTA AIR BASE, Japan – It took a while for the defending Far East Division I champions to hit their stride in their season opener, but once they did, Jo Tsusaka and American School In Japan could not be stopped.

Tsusaka, a senior, rushed 16 times for 107 yards, including touchdown runs of 2 and 12 yards, and the Mustangs overcame early deficits of 7-0 and 10-7 by scoring 27 unanswered points in beating Yokota 34-10 on Saturday at Yokota’s Bonk Field. The Panthers fell to 0-2.

“The guys showed a lot of resilience, coming back and playing the way they did the last three quarters,” said Mustangs new head coach Roy Tomlinson. “In the second half, we played much stronger, tougher, more physically, we controlled the tempo.”

While Yokota won the battle of the interior in the first half, as coach Tim Pujol likes the emphasize, ASIJ “won a lot of line of scrimmage stuff in the second half,” Pujol said. “We couldn’t get a stop and force them to give us the ball back.”

Yokota went in front 7-0 on Manny Mptias’ 49-yard touchdown catch from Nathan Rundle. After Andrew Howe tied it with a 16-yard touchdown run, Mptias gave the Panthers their last lead on a 27-yard field.

“We had a rough first quarter,” Tomlinson said. “Coach Pujol is a great coach, he had a good game plan and always prepares his players to play us. We were clearly not up to game speed. They pushed us around early. We have a lot of improving to do.” From there, Tsusaka and the Mustangs held sway.

Howe finished with 70 yards on 10 carries plus seven tackles, while Jack Ambrosino added 83 yards on seven attempts, including a 1-yard sneak for a TD, and went 3-for-9 for 37 yards passing. Nash Rasmussen added five tackles for ASIJ. Yoshiki Takahashi added a 5-yard TD run.

For Yokota, Rundle was 4-for-11 for 93 yards. Kishaun Kimble-Brooks ran 20 times for 114 yards, Marquis Smith-Brown had 20 yards on four carries and 29 yards on two catches, Jimmy Dewberry had a fumble recovery and Jack Winkler had 10 tackles.

Tomlinson, a 1986 West Point graduate and a cancer survivor, arrived at ASIJ in 2005 as its offensive coordinator and has stepped into the shoes vacated by John Seevers, the Mustangs’ 40-year coach who announced his retirement after last season.

“He leaves some big shoes to fill; no one can do that,” said Tomlinson, adding that he had “goosebumps” on the field Saturday. “This is a dream, to coach at ASIJ and to win this game, that was nice.”

Now comes a particularly tough part of the D-I schedule for the Mustangs, who next visit Nile C. Kinnick on Friday before entertaining Kadena on Sept. 16 in a rematch of the D-I final, which ASIJ won 35-18 last Nov. 12.

“We know what’s coming,” Tomlinson said. “The challenge will be tough.”

Yokota next heads into the Division II portion of its schedule, after losing to ASIJ and at Kadena 44-0 on Aug. 26. The Panthers travel to Robert D. Edgren for a game Friday.

“We’ll see how it goes,” Pujol said. “We took some steps forward from last week. I thought we played better this time.”