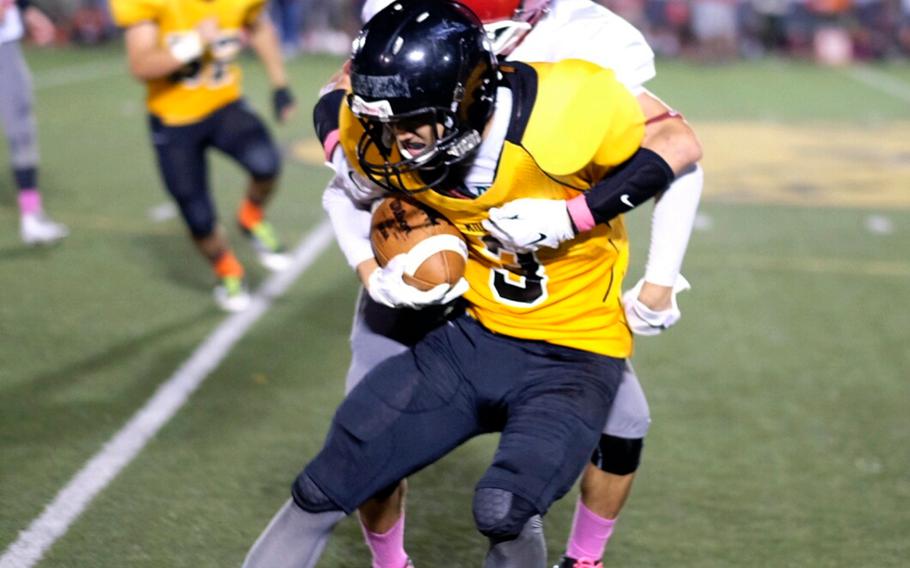 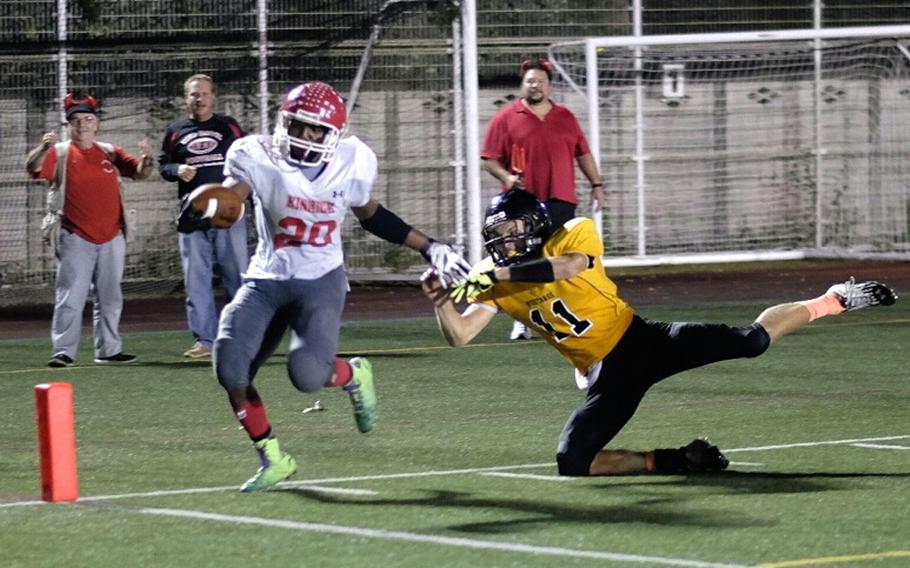 Nile C. Kinnick running back Dre Paylor gets past American School In Japan linebacker Brandon Rogers on his way to the endzone during the third quarter of the Red Devils and Mustangs game Friday in Chofu, Japan. The Red Devils lost 15-9, their first defeat of the year. (James Kimber/Stars and Stripes ) American School In Japan defender Sam Linder gets just enough hand on the ball Friday during an extra point attempt to force the failed conversion in the third quarter of the Mustangs' 15-9 upset over undefeated Nile C. Kinnick in Chofu, Japan. (James Kimber/Stars and Stripes ) 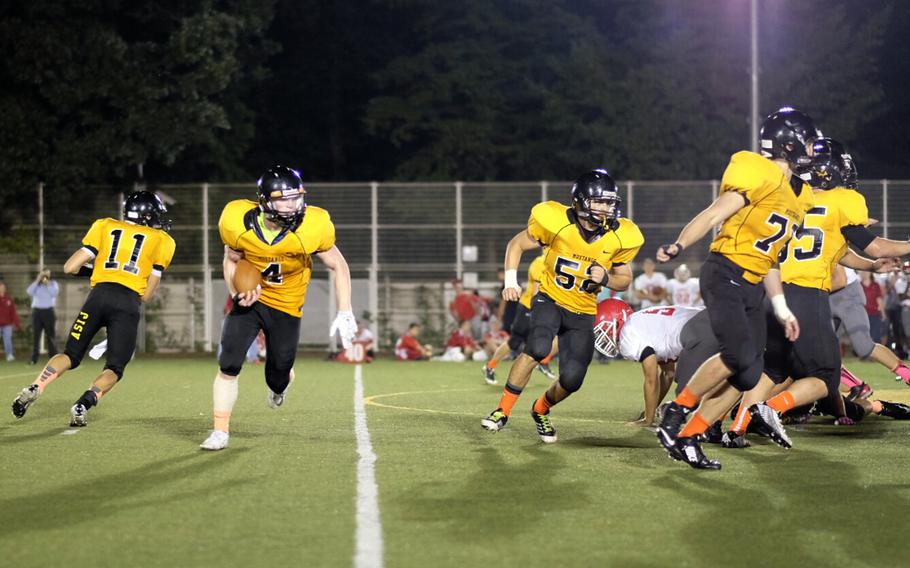 American School In Japan running back Ryan Murphy takes the handoff Friday in the second quarter of the Mustangs' 15-9 upset of previously undefeated Nile C. Kinnick in Chofu, Japan. (James Kimber/Stars and Stripes )

TOKYO – By handing Nile C. Kinnick its first loss of the season, American School In Japan has repeated as Kanto Plain Association of Secondary Schools football champions, winning their third title in the last five seasons.

Brandon Rogers threw a 17-yard touchdown pass to Alex Dacus with 1 minute, 56 seconds left in the third quarter as the Mustangs rallied from a 9-7 deficit to down the Red Devils 15-9 on Friday at Mustang Valley.

“How about that?” longtime ASIJ coach John Seevers said of winning the fifth outright Kanto title in school history. The Mustangs (4-1) shared the crown with Zama in 1994.

“That was a good team that we played. We were excited to play them. We knew we had a shot at it. We just kind of had to pull it all together. Our goal was to finish well. The kids played well.”

Rogers finished 8-for-20 for 138 yards. Ray Hotta rushed six times for 52 yards and ASIJ’s other touchdown. Alex Carroll led the defense with eight tackles, three for losses, and Ryan Murphy and Aidan Hall each recovered fumbles deep in Kinnick territory.

That was the narrative for a Red Devils team that moved the ball, but had trouble finishing. Kinnick fumbled four times and Brady Yoder misfired on a 32-yard field-goal try after hitting a 40-yarder earlier in the game.

“We learned a lot about ourselves today, faced some adversity and worked through it,” said coach Dan Joley, whose Red Devils (5-1) still have much to play for, with a visit to Kadena next Saturday and a berth in the Far East Division I title game on the line.

“Any championship-caliber team has to learn to deal with adversity. We were doing the learning today. Coach Seevers had his team ready to play. A phenomenal job by the Mustangs. We moved the ball; we just shot ourselves in the foot.”

A week after setting the Pacific single-game rushing record, Dre Paylor rushed 27 times for 241 yards and a touchdown, had two interceptions and a team-high 10 tackles. He leads the Pacific with 1,465 yards and 18 touchdowns on 133 carries.

“He was all over the place,” Joley said.

The Mustangs conclude their season Oct. 24 at Kubasaki.