Army continues its mastery of Navy in annual Korea game 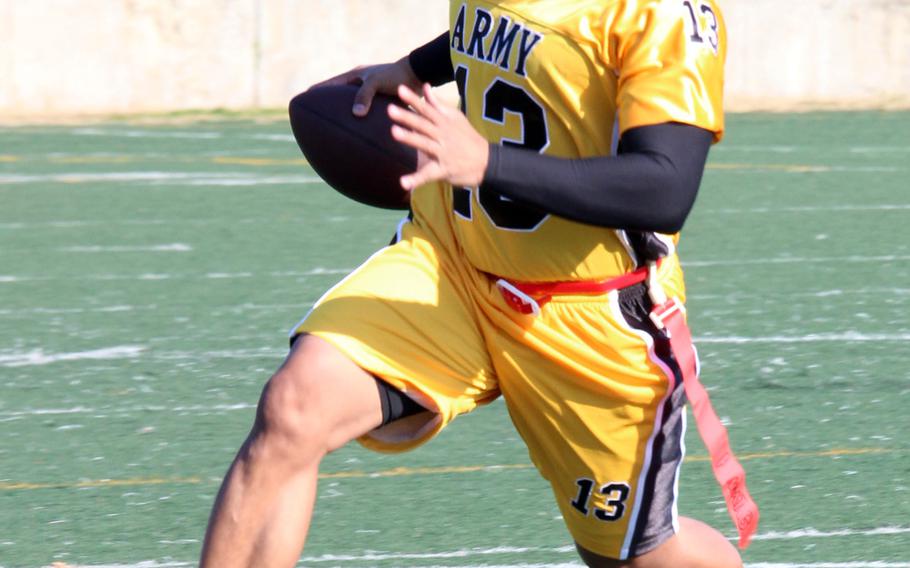 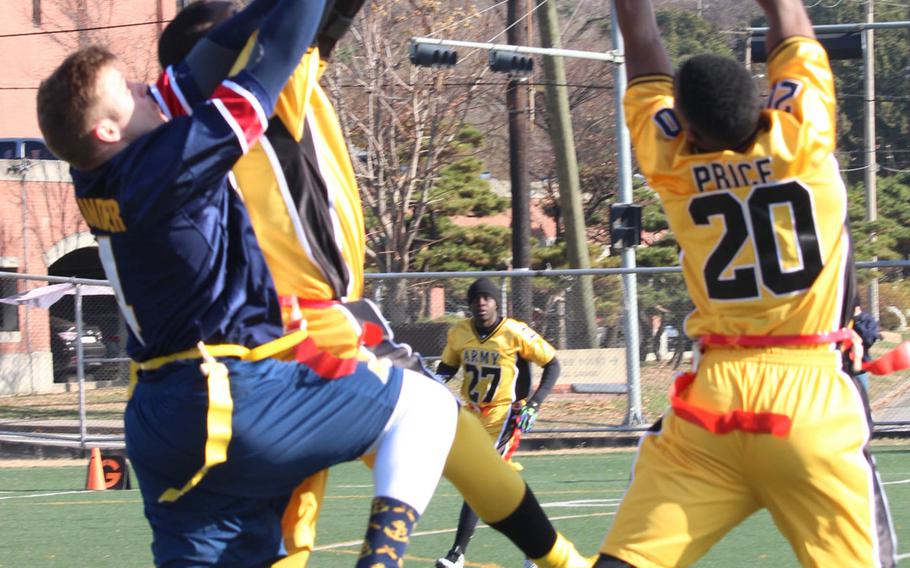 YONGSAN GARRISON, South Korea – They may be rivals on the field, but ranking officers presiding over Saturday’s annual Army-Navy flag football game feel the true goals of the game go far beyond on-field competition.

“What I enjoyed about this game is that it’s not about who wins and who loses,” said Col. Maria Eoff, commanding officer of U.S. Army Garrison Yongsan, the game’s annual host site. “It’s about the camaraderie and the jointness of getting the whole community together.”

Soldiers from around 8th U.S. Army installations throughout the Republic of Korea scored a 20-0 shutout of Navy and Marine Corps enlisted and officers from around the peninsula. The game was played for the 19th time at Sims Family and MWR Field at Seoul American High School.

It was much more one-sided than last year’s 20-14 edging of Navy by Army, and it gave the soldiers a 16-3 lead in the series dating back to 1997. Overall in the Pacific, Army leads Navy 41-15; other games are played on Okinawa and in Japan and used to be played on Guam.

Such Pacific flag-football rivalry games have been in existence since the first one on Okinawa played in 1990.

They’re closely timed with the Army-Navy service-academy games, this year scheduled for Dec. 12 at Philadelphia’s Lincoln Financial Field. Kickoff is 5 a.m. Dec. 13 on AFN Sports. Navy leads that series 59-49-7 and has won the last 13 straight games.

Compared to last year’s nail-biter, “I think we did much better,” Army’s Willard Butler said. “We had a much better defense. It definitely helped us win the game.”

Despite the one-sided outcome, the Navy defense played better than the score showed, Marine James Suah said. “I think our defense did pretty good. We stopped them most of the time,” he said.

The weatherman deserved a tip of the hat Saturday, as the game was played in temperatures approaching 50 with sunny skies. A crowd of about 600 was in attendance.

On Okinawa, Army leads the series 18-7, but Navy has won three of the last four and four of the last six. That series resumes Saturday at Torii Station.