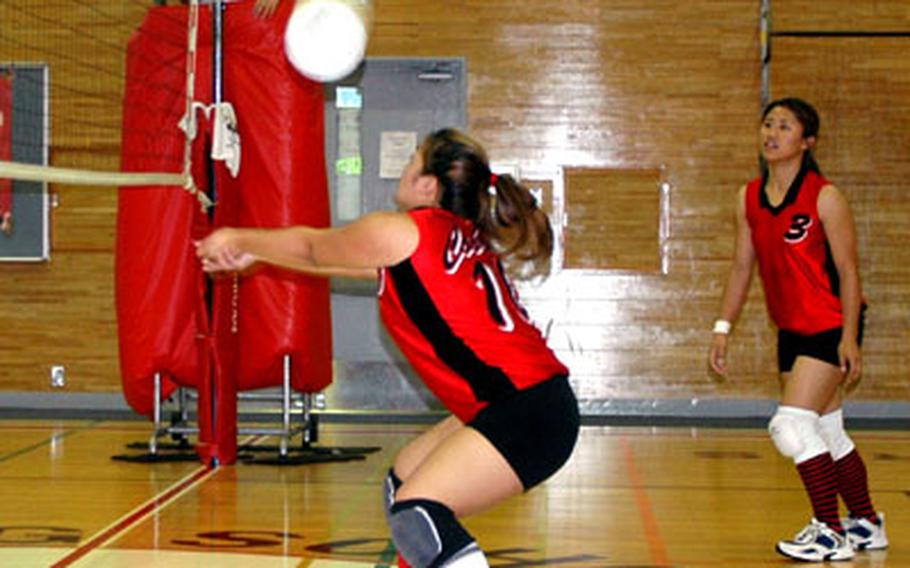 E.J. King’s Elicia Castro hits a set-up shot as Christina Rennick looks on Friday during a contest against Edgren High School in the Far East Class A volleyball tournament on Friday at Sasebo Naval Base, Japan. (Greg Tyler / S&S)

E.J. King’s Elicia Castro hits a set-up shot as Christina Rennick looks on Friday during a contest against Edgren High School in the Far East Class A volleyball tournament on Friday at Sasebo Naval Base, Japan. (Greg Tyler / S&S) 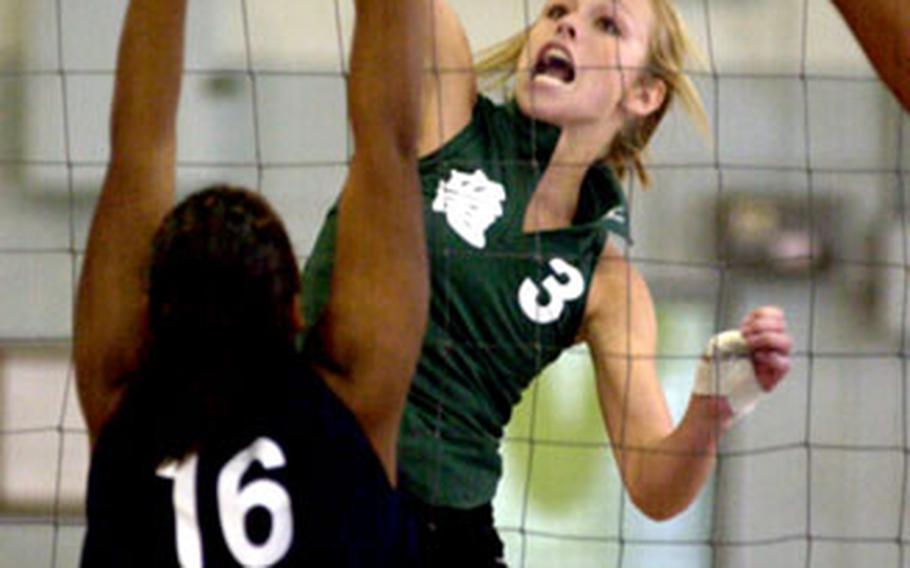 After finishing third in 2003 and second last year, the Falcons became the second Department of Defense Dependents Schools-Pacific team to win the team championship.

Also gaining a measure of revenge was Kristia Suriben of Japan&#8217;s E.J. King Cobras. A sophomore who exited last year&#8217;s Far East tournament in the first singles round, Suriben rebounded in style by capturing the girls singles and doubles titles.

Suriben defeated Amanda Reiff of Osan American 6-4, then teamed with Jemari Nimedez to down Krystine Horsley and Tori Lee of Robert D. Edgren 6-4 to win the doubles.

One of those comebacks came in the fifth set against Faith, when the Warriors trailed 8-2 before rallying behind tournament MVP Lynnette Grant and all-tournament spikers Kelli Cox and Kadijah Parker.

Sharp cited a late-season slump, in which the Warriors finished third in the Korean-American Interscholastic Activities Conference tournament after an unbeaten regular season, for helping key Taegu&#8217;s comebacks.

Taegu joins Osan American, which won the tournament in 2001, as the only DODDS-Pacific teams to capture the crown.

Kubasaki comes up short in AA volleyballAll week, Okinawa&#8217;s Kubasaki Dragons seemed to find their way out of trouble when on the wrong end of the scoreboard. On Friday, Kubasaki&#8217;s well ran dry.

Junior middle blocker Catherine Thornton and the American School In Japan Mustangs avenged a two-set loss to the Dragons earlier in the tournament, downing Kubasaki 25-10, 21-25, 25-15, 25-12 in Friday&#8217;s semifinals. Kubasaki was to play John F. Kennedy of Guam for third place on Saturday, while ASIJ advanced to the championship against Christian Academy In Japan.

Seoul American was to face Simon Sanchez for seventh place on Saturday.