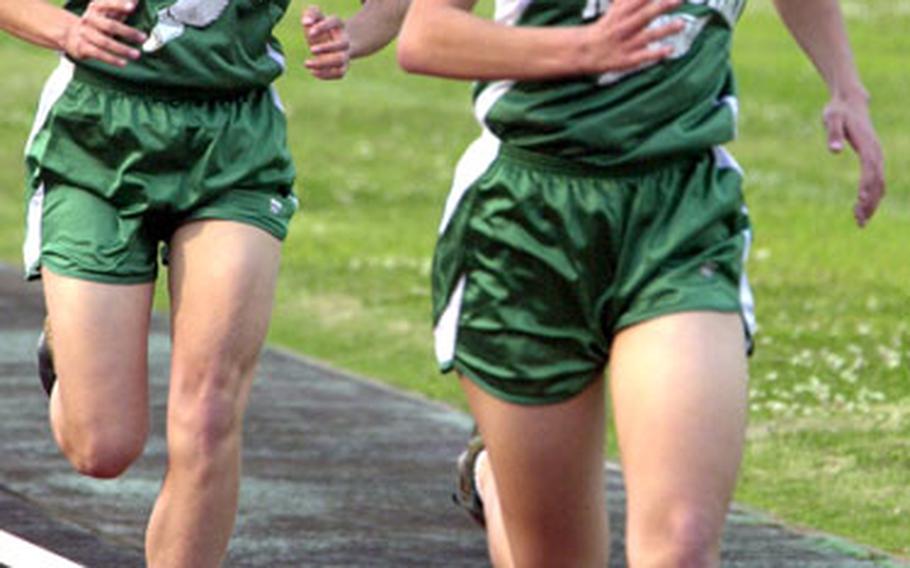 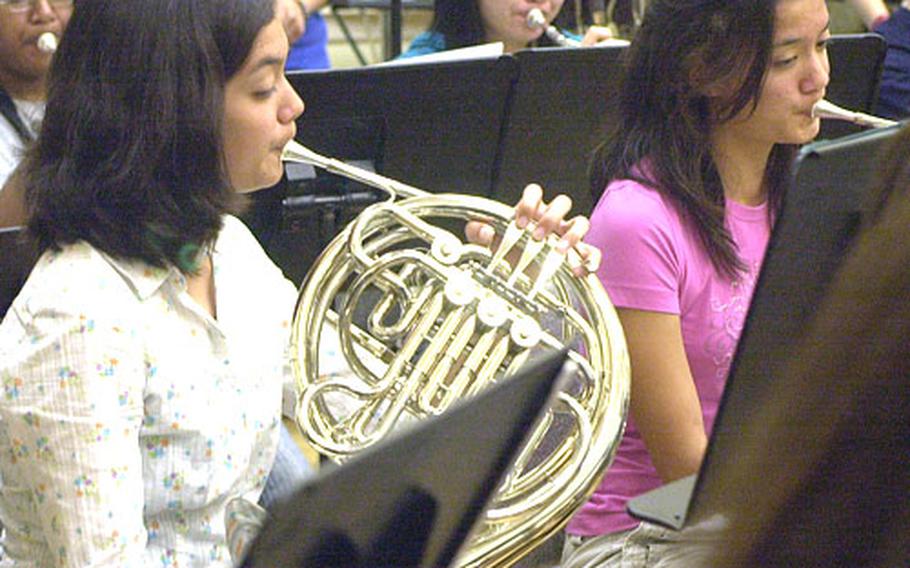 Beth and Lisa Nielsen are concentrating on another passion of theirs this week: playing the French horn at the Far East High School Music Festival on Camp Foster, Okinawa. (Dave Ornauer / S&S)

Should they stick with their respective sports teams, preparing for this weekend&#8217;s many league tournaments? Or blow their horns or sing their hearts out at this week&#8217;s Far East High School Music Festival on Okinawa?

That was the tough choice several student-athletes from Misawa to Mangilao had to make.

The DODDS-Pacific&#8217;s Far East Activities Council calendar alone lists tournaments and festivals in 14 different activities, half sports and half fine arts. It&#8217;s a double-edged sword, said Don Hobbs, DODDS-Pacific FEAC chair. While students have opportunities to do many things, they &#8220;have to make choices and they have to learn from those choices.&#8221;

But that doesn&#8217;t make deciding any easier &#8212; especially for music festival participants who must go through a rigorous audition, with final selection made by the 3rd Marine Expeditionary Force Band, which is hosting the five-day event.

The Kubasaki distance runner, who could not practice with the team this week, took to running early in the morning with her twin sister Lisa to prepare for Saturday&#8217;s district meet.

Some athletes did choose sports over music. Freshman pitcher Ashley Smith of Pusan American and her senior sister Jeni chose softball over choir. The Panthers are 7-5 and in second place in the league &#8212; and Pusan American is closing in June. &#8220;I wanted to make this season special for Jeni,&#8221; Ashley said.

And with Pusan having just eight softball players, &#8220;if those two had auditioned (for music festival), the season would have been over,&#8221; said Pusan American band director Jonathan Parker.

Lisa Hart&#8217;s goal 10 minutes into the second half Tuesday rallied the American School In Japan Mustangs from a 1-0 halftime deficit. They hung on for a 1-1 deadlock with the Red Devils, the first blemish this season on Kinnick&#8217;s otherwise perfect ledger.

Kubasaki strikers slog through rain for sweepThe daylong downpour at Nago, Okinawa, left standing water in parts of the field, making ground passing impossible. But the Kubasaki Dragons boys and girls soccer teams played through it. The boys improved to 5-2-1 and the girls to 4-3, with all three losses to Kadena.

Kelly and girls coach Terry Chumley said they tried to impress on their charges to not focus on the downpour and send as many passes as possible through the air, move the ball and attack on the outside.

&#8220;We&#8217;ve not had the same starting lineup all season,&#8221; Boyd said of a team with at least four players sidelined by injury in every one of its matches. &#8220;Last year&#8217;s KAIAC tournament went so well. I just hope we can do some good things this weekend and come away with some momentum heading into Far East" in May at Yokota Air Base, Japan.