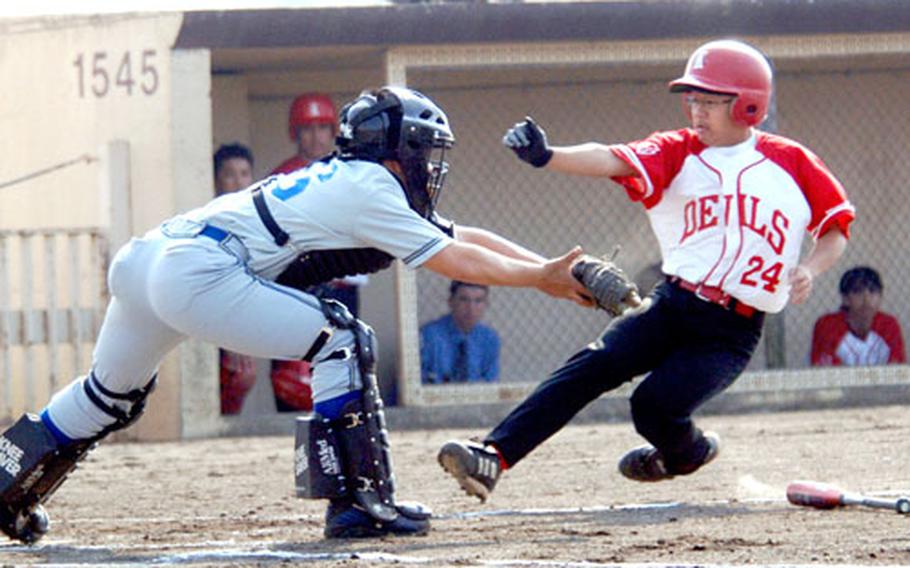 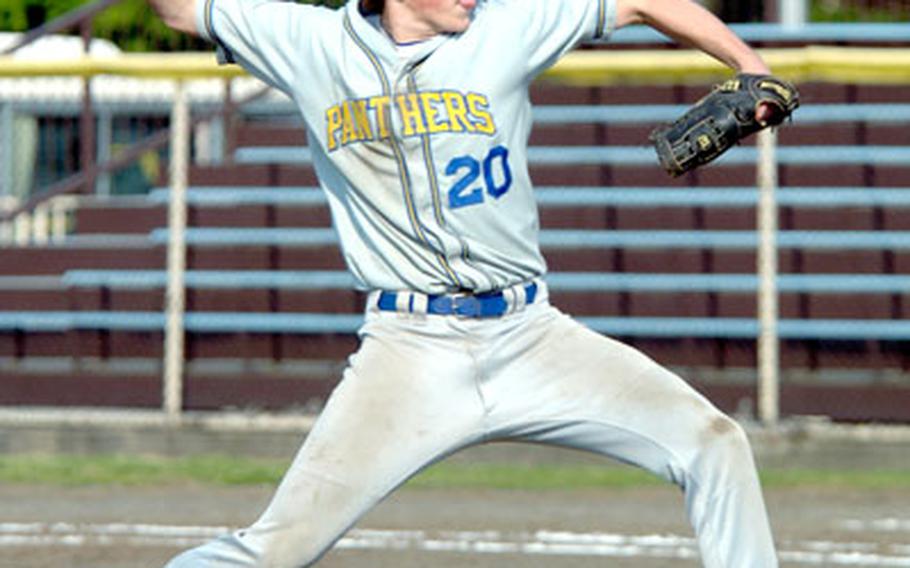 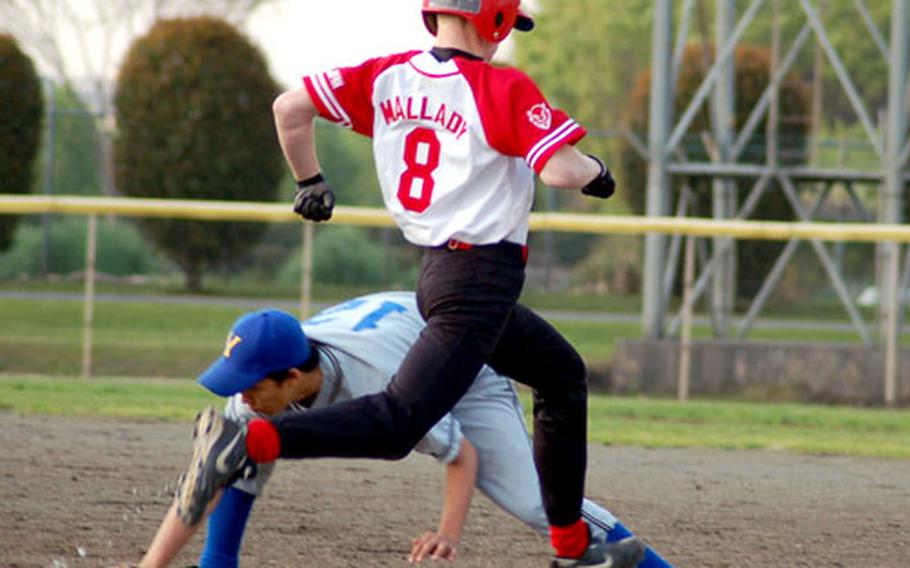 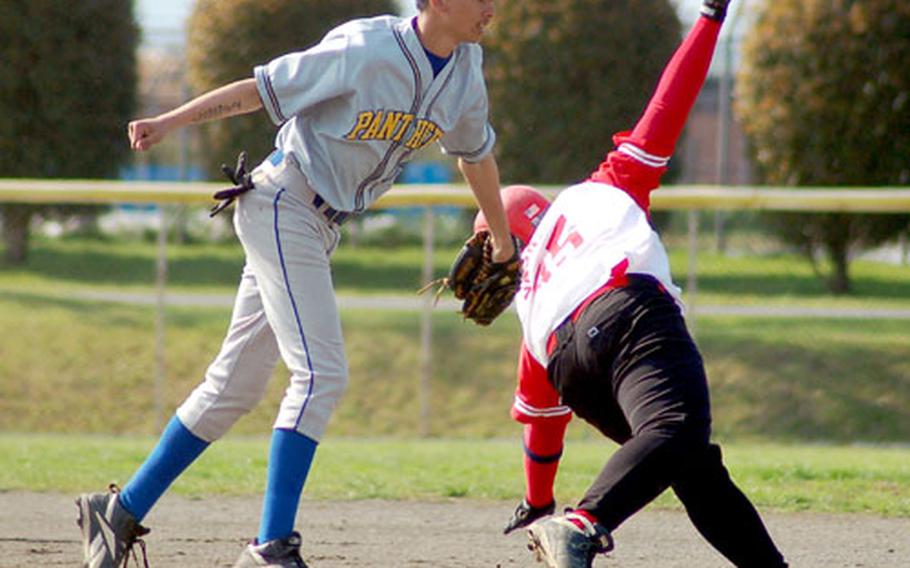 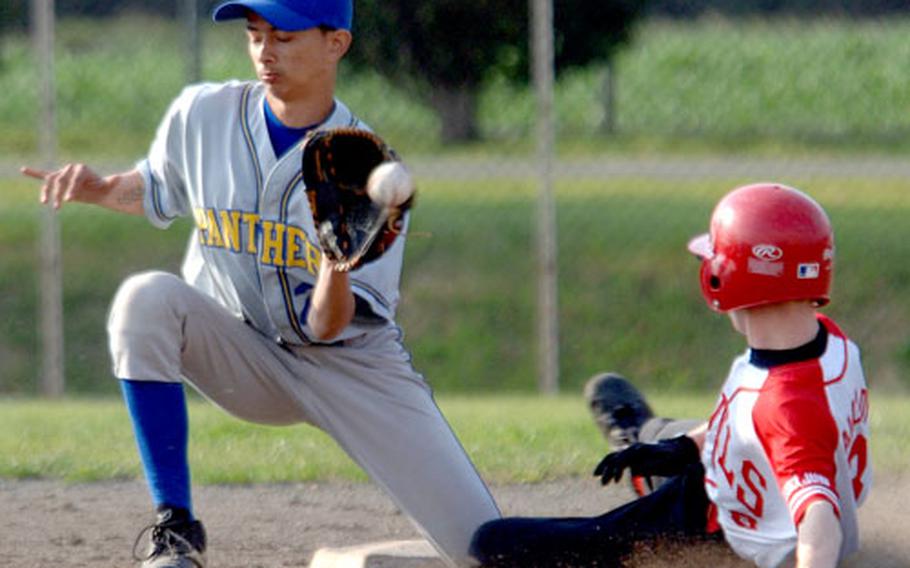 It couldn&#8217;t have come at a better time: Friday&#8217;s opening day of the Korean-American Interscholastic Activities Conference tournament for large schools at Seoul&#8217;s Falcon Field.

Chris Churchwell, hobbled by a knee injury much of the season, returned to the field and scored a goal in each of the Falcons&#8217; two matches, a 2-0 shutout of Taegu American and a 2-1 overtime triumph over International Christian-Seoul, which had beaten the Falcons twice this season.

&#8220;He makes such a tremendous amount of difference out there in the middle. He&#8217;s everywhere,&#8221; Falcons coach Steve Boyd said of Churchwell, who scored on a pair of headers.

After Churchwell gave Seoul American a 1-0 first-half lead, the Guardians rallied on Daniel Jung&#8217;s penalty kick to tie it and send it to overtime. Three minutes into the extra session, Daniel Kim crossed the ball to Allen Chin, who headed it in for a &#8220;golden goal&#8221; and avenged the two losses to ICS-Seoul.

Seoul Foreign&#8217;s players didn&#8217;t have it easy, either. To tie, they needed a momentum-changing penalty-kick goal by Remco Rademaker who, with 34 goals, led the region in scoring. To rally past Taejon Christia International 3-2, they needed Patrick Byun&#8217;s game-winner.

Only one of five matches Friday ended in a margin larger than two goals. &#8220;You want to talk about your edge-of-your-seat action. There were some great games today,&#8221; Boyd said.

On Friday&#8217;s Seoul American&#8217;s girls cruised past ICS-Seoul 9-0 and over Seoul International 5-0, getting three goals each from Erica Anglade and Nykol Cabrera and two from Angye Law.

Yokota, Kinnick split doubleheaderFriday was not a good day to hold an early lead if you were playing baseball at Yokota Park.

Trailing 7-6 in the fifth inning, Yokota tied it on Mark Dixon&#8217;s solo homer and Kyle Shimabukuro followed with a solo shot to put the Panthers ahead for good, then they tacked on nine runs in the sixth to run away from Nile C. Kinnick 17-7.

The Red Devils returned the favor in the nightcap of the Japan Baseball League twin bill, surging from behind 8-4 with five runs in the seventh inning.

In the second game&#8217;s sixth inning, &#8220;it looked like Kinnick was finished but they came alive with their bats. ... they did a good job and showed great composure, just as we did in the first game,&#8221; Kitts said. &#8220;We showed a lot of heart to persevere and battle back from a deficit."

Mostly freshmen who&#8217;ll be returning next season played the final 60 minutes of Friday&#8217;s 4-1 victory over Matthew C. Perry. Two, Holly Benton and Megan Godfrey, each tallied their first goals of the season.