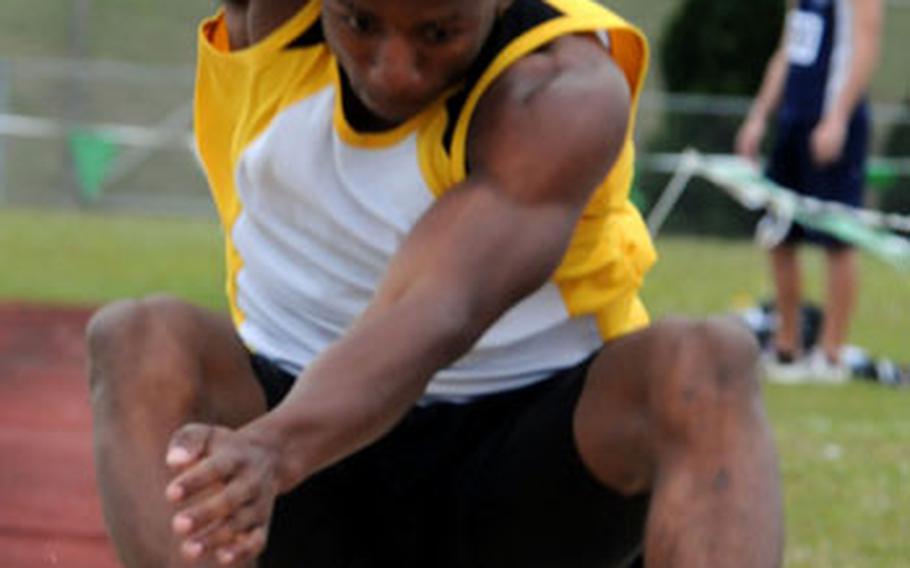 But on Friday, the Kadena sophomore eclipsed the Mike Petty Memorial meet record of 6.45 meters. Coleman jumped 6.47, or 21 feet, 2 inches, to shatter the mark set two years ago by Kadena&#8217;s Manuel Duran.

"We&#8217;ve been waiting for the right moment" to debut Coleman, Panthers coach Sergio Mendoza said. He added that Coleman has jumped longer than that in practice.

Coleman, who says he&#8217;s been running since he was 6, said he approaches the long jump "trying to jump over Shaq and dunk," referring to NBA star center Shaquille O&#8217;Neal.

Coleman&#8217;s performance was one of two record breakers on Day 1 of the 7th Petty meet, featuring more than 300 runners from 16 schools under a cloudy, at times rainy, sky.

Sarah Wilson of Zion Christian Academy shattered her mark in the girls 400, clocking 1 minute, 1.07 seconds in qualifying for Saturday&#8217;s final. She ran the distance in 1:02.18 last year. Gwen Thornton of American School In Japan also beat the old mark, with a 1:01.23.

Ecker credited his coaching staff and teammate Sean Kincaid running off his shoulder most of the way for the victory. "Sean is a great runner. He&#8217;s always there with me," Ecker said.

"I just want to break records," the disappointed Lieberg said, adding that he&#8217;ll point toward next month&#8217;s Kanto Invitational in Tokyo. "I just have to train harder than I&#8217;ve ever trained."

Quallio has accepted an appointment to the Air Force Academy and must report in June, right after graduation; thus, Quallio opted to take the vacation when he could. Moellendick said Quallio would be at the Kanto Invitational next month in Tokyo.

Bria Pressley scored her 14th and 15th goals and Jasmine Pressley added her ninth goal and two assists as the Cougars blanked the Falcons 4-0 at Seoul American&#8217;s Falcon Field on Yongsan Garrison&#8217;s South Post. The Cougars had beaten the Falcons 4-2 at Osan Air Base on March 7.

"It feels good. Doing anything for the first time is always exciting," said coach Sung Plourde, adding that midfielder Celine Baldevia, out most of the season, saw limited action, "so that&#8217;s a good sign. Hopefully, with the one-week break, everybody will come back healthy."