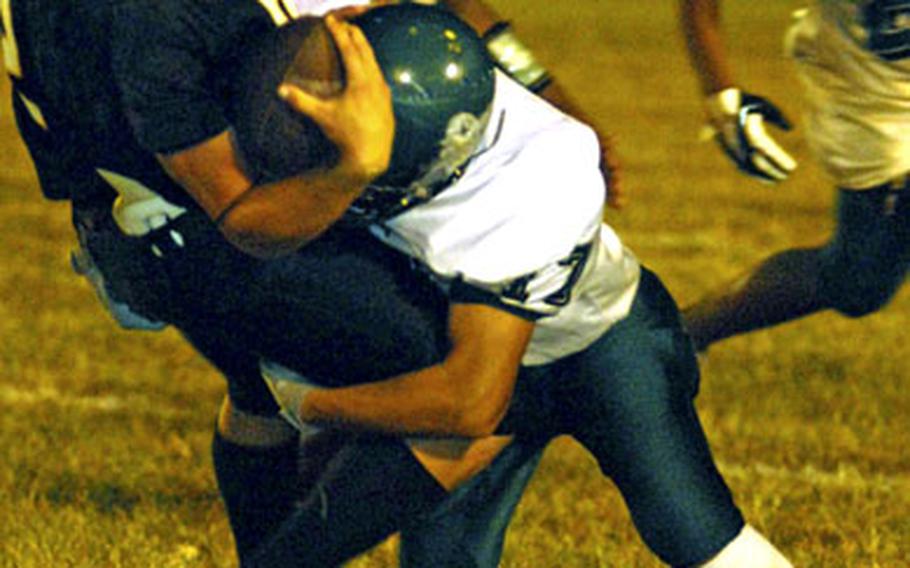 It was a red-letter Friday night for Panthers in three locales, as Yokota, Kadena and Guam High scored crucial victories in high school football:

At Yokota Air Base, Japan, McNeill rushed 45 times — 15 in the fourth quarter — for 313 yards and three touchdowns, breaking the JFL record of 291 yards set by Yokota’s Darren Taylor on Oct. 19, 2001, also against Kinnick. McNeill leads the Pacific with 1,129 yards and is second with 12 TDs.

In almost a mirror image of its season-opening 21-12 comeback victory over Kinnick (3-3) on Sept. 1, Yokota trailed the Red Devils by 12 points with 3:40 left in the third quarter, then turned it around in dramatic fashion.

Unlike the first game, which was fraught with penalties and turnovers, “this was like two heavyweights slugging it out,” Yokota coach Tim Pujol said of a game featuring several momentum swings and huge plays.

Larynzo Abernathy of Kinnick, who ran 28 times for 238 yards, scored two third-quarter touchdowns — one on a 69-yard run — to put Kinnick ahead 28-16.

McNeill cut it to 28-23 with a 2-yard TD run, then Caiveon Thomas set up his game-winning 10-yard scoring pass with an interception. Yokota drove to the Kinnick 10-yard line, where on fourth-and-4 Peter Weaver found Thomas in the back corner of the end zone. Thomas sealed it with an interception on Kinnick’s next possession and Yokota ran out the clock.

“That was one of the best catches I’ve ever seen in high school football,” Pujol said. “Caiveon, Anthony and Peter all did a great job. This was a great game to be a part of, an emotional game.”

Weaver was 4-for-5 for 101 yards. Patrick Pamintuan ran eight times for 37 yards, caught two passes for 56 and had two returns for 41.

“They chipped away,” Kinnick coach Gary Wilson said of Yokota. “They always find a way. This was the hardest loss I’ve been associated with, being so close and having it snatched away like that. But I'm proud of the guys.”

Quarterback Jeff Galang was 4-for-10 for 36 yards and a TD pass to Jonathan Santos and also ran 1 yard for a Kinnick score.

At Kadena Air Base, Okinawa, Panthers coach Sergio Mendoza and offensive coordinator Steve Schrock, who are known more for their conservative power-I and wishbone attack, stepped out of character, introducing a spread-option offense favored by many colleges.

Schrock said he spent most of the summer studying the spread sets used by Texas Tech and Missouri.

“You can cover two or three people, but you can’t cover six” in a spread set, Schrock said.

“We have the speed and ability to add that dimension,” Mendoza said. “It’s a lot of fun.”

Out of that formation, Robinson broke free for touchdown runs of 4 and 64 yards.

Shattuck, a junior transfer from Putnam West High in Oklahoma, rambled 73 yards for a first-quarter score, then sealed the outcome with a 5-yard TD in the fourth.

As well as the blocked punt, Shattuck led the team in tackles.

“He’s playing with a lot of discipline and heart,” Mendoza said. “We’re really lucky to have him.”

Dickerson threw 21 yards for the game’s first score to Quinton Mason and Tim Gardner ran 4 yards for a touchdown to open the third quarter and tie it 14-14.

Dickerson went 7-for-21 for 92 yards and ran four times for 38 yards, and Gardner ran for 44 yards on nine carries. Tommy Fair recovered a fumble, the game’s only turnover.

Game 2 of the best-of-three series is set for next Friday at Kubasaki, with Game 3, if necessary, on Oct. 27 at Kadena.

“It’s just one game,” Mendoza said. “The Dragons are tough. This is not over yet. We expect it.”

At Upper Tumon, Guam, the Panthers (3-3) overcame injuries to stars Raymond Beria and Jeremy Miller to advance to the IFL semifinals for the second time in school history.

Cameron Yecki ran for a second-quarter touchdown and passed to Curtis Washington to make it 14-0 in the third quarter. Then Miller ran back an interception 30 yards for a score before leaving with leg cramps. Allen Moos capped the Guam High scoring late in the quarter.

It was sweet revenge after the heartbreak of an overtime loss last week.

“We got down to the nitty gritty and told them, ‘Look, we’re giving away these games. We’re either going to win or go home,’” coach Yvonne Tyrrell said.

Unlike previous defeats, “what the guys did this evening was play like they were taught. There were no stars tonight. Everybody on the team went home with something to brag about. They’re finally figuring out, we’re a team and we’re playing football.”

Guam High will take on three-time defending IFL champion George Washington on Friday — a team that pounded the Panthers 60-6 on Sept. 16.

Game 3-Guam High vs. George Washington, time and site to be determined.

Game 4-Game 2 winner vs. Father Duenas Memorial, time and site to be determined.

Game 5-Game 3 loser vs. Game 4 loser at higher seed, time and site to be determined.