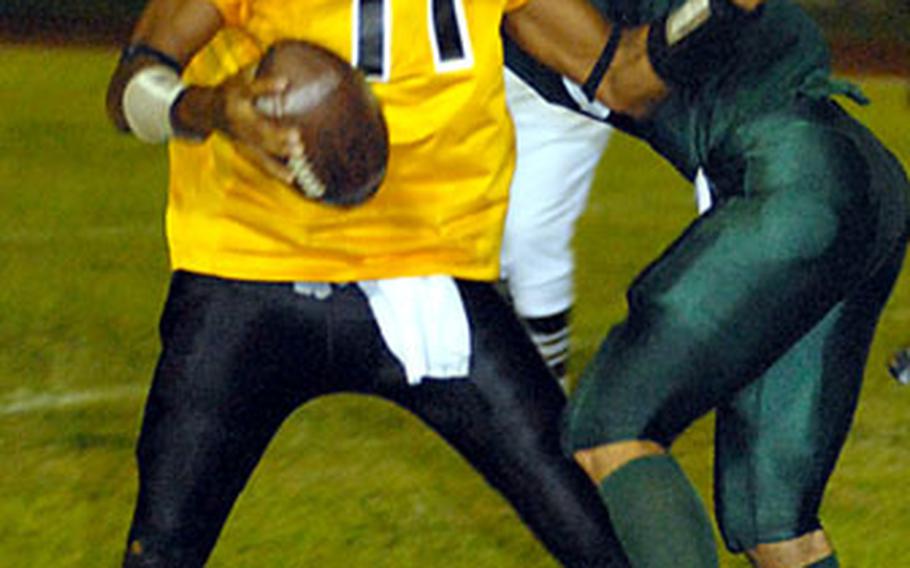 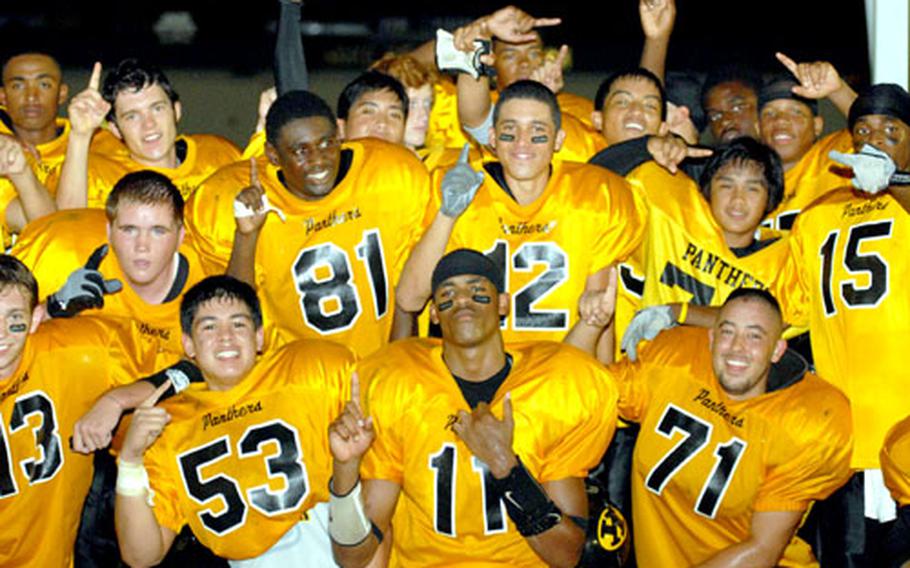 Behind an offensive line that plowed the road for a powerful rushing performance by junior transfer Sean Shattuck, the Kadena Panthers seized the Okinawa Activities Council football title from Kubasaki on Friday and dethroned the defending Far East Class AA champion Dragons.

Shattuck, a newcomer from Putnam West High in Oklahoma, ran 13 times for 192 yards, including 76- and 34-yard touchdown runs, and the Panthers (2-0) held off a spirited Dragons fourth-quarter comeback to win 14-8 in Kubasaki&#8217;s Mike Petty Stadium.

Kadena won the best-of-three OAC series 2-0, earning the right to travel to Yokota Air Base on Nov. 4 to meet the eight-time Japan Football League champion Panthers in the Far East Class AA semifinal.

Mendoza&#8217;s last experience at Yokota was as Kadena Islanders coach: a 50-6 loss in the Rising Sun Bowl, when Okinawa&#8217;s schools each fielded split squads.

That changed with last year&#8217;s debut of the Far East playoff system, in which Kadena and Kubasaki field their full varsity teams.

In the JFL, Yokota survived a scare and emerged from Misawa Air Base with its 38-game regular-season winning streak intact, barely escaping Robert D. Edgren 14-13.

Yokota running back Anthony McNeill&#8217;s reign as holder of the JFL record for rushing yards in a game lasted a week. Larynzo Abernathy rambled for 362 yards on 28 carries with three touchdowns as Nile C. Kinnick pummeled Zama American 34-6.

Kadena 14, Kubasaki 8At Camp Foster, Okinawa, Shattuck admitted he didn&#8217;t relish leaving the States to play for Kadena but once he came aboard in August, &#8220;everybody talked about being the Far East champion,&#8221; he said, adding that he quickly caught the Panther spirit. &#8220;We worked our butts off every day. Even Saturdays.&#8221;

Shattuck and Mendoza credited the offensive line for the gaudy totals.

Shattuck opened the scoring by rambling through a Kubasaki arm tackle around right end and up the sideline untouched with 2:42 left in the first quarter. He then broke five tackles up the gut on a 34-yard touchdown scamper 4:17 into the third period.

From there, the Panthers hung on, overcoming four fumbles and 14 penalties for 115 yards to keep the Dragons at arm&#8217;s length. The last fumble was recovered by Kubasaki&#8217;s Jorge Cristobal, who returned it to the Kadena 11 with 2:04 left.

That set up Kubasaki&#8217;s touchdown, a 5-yard Michael Dickerson strike to Michael Bennett. Tim Gardner caught a two-point pass from Boomer McCaw to cut it to 14-8, but the ensuing onside kick by Zach Schwartz went out of bounds and Kadena ran out the clock.

Kubasaki also suffered its share of miscues, losing two fumbles dropping five passes, three of them to wide-open receivers behind the Kadena secondary.

George Washington 42, Guam High 12At Mangilao, Guam, Ware ran for touchdowns of 65, 60, 60 and 15 yards, Jude Shimizu added a 3-yard TD on a quarterback sneak and Mychal Borja returned an interception for a score as the Geckos (7-0) shattered the Panthers&#8217; title dreams.

Cameron Yecki hooked up with Chris Hoyle for a 25-yard TD pass in the second quarter, then ran from 1 yard out near the end of the third quarter to account for Guam High&#8217;s scoring.

Guam High&#8217;s season is far from over: The Panthers (3-4) play the loser of Saturday&#8217;s Simon Sanchez-Father Duenas Memorial game for third place in the IFL next Friday, then host Seoul American in the Far East Class AA semifinal on Nov. 4.

Nile C. Kinnick 34, Zama American 6Abernathy&#8217;s performance at Camp Zama resulted in the third-best game total in Pacific history and also carried him past McNeill for the JFL season lead with 1,319 rushing yards on 176 carries, plus 16 touchdowns.

Quarterback Jeff Galang went 5-for-8 for 57 yards and two touchdowns.

Grant Rodgers and Chad Atchley each caught TD passes, Andrew Preston had a sack and 12 tackles, Drew Dietrich added 11 stops and Joseph Richmond and Ian Vasquez had 10 tackles each.

Yokota 14, Robert D. Edgren 13At Misawa Air Base, it appeared as if the Eagles (3-4) would come away with a victory. David Leh cut a 14-7 deficit to one point with a 3-yard run with 5 minutes left &#8212; and on the two-point conversion attempt, Leh fumbled but the ball bounced into the hands of teammate Zach Latimore, who ran it into the end zone.

But the linesman whistled the play dead as Leh fumbled. Edgren coach Chris Waite and Yokota coach Tim Pujol conferred with the officials, who said the ruling on the field was an inadvertent whistle, and the only options were to do the play over or take the result of the play &#8212; which had Leh down short of the end zone. Leh came up short on the retry for point.

Peter Weaver was 3-for-6 for 58 yards and a 36-yard TD pass to Thomas, while Darnell Murphy scored on a 1-yard TD run in the third quarter for Yokota. McNeill was held to a season-low 82 yards on 16 carries and trails Abernathy with 1,211 yards on 166 attempts. Edgren&#8217;s first score came on Josh Ray&#8217;s 6-yard first-quarter pass to Cassey Bennett.

Guam High vs. Simon Sanchez/Father Duenas loser at higher seed, time and site to be determined.

George Washington vs. Simon Sanchez/Father Duenas winner at higher seed, time and site to be determined.