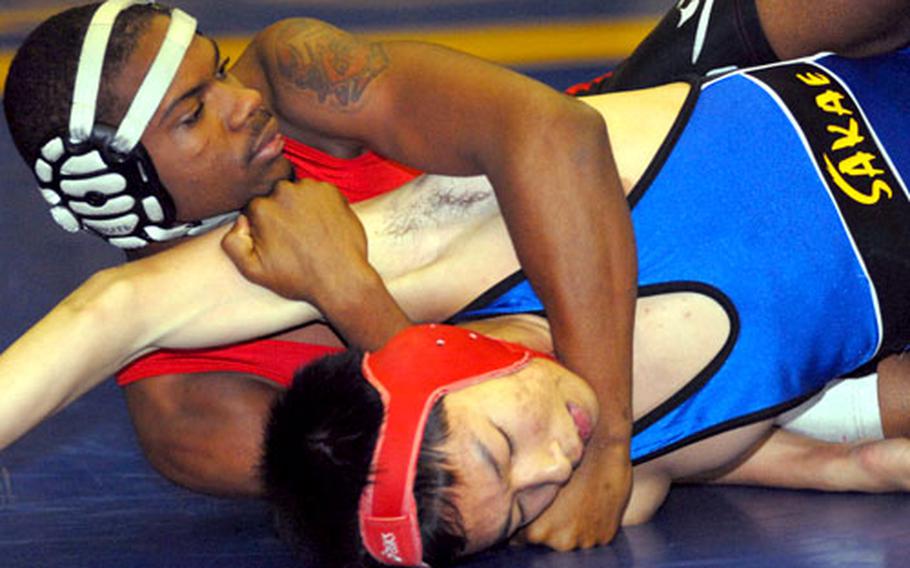 The Yokota senior 168-pounder had just won a lackluster bout against Nichalous Gibbons of Nile C. Kinnick on Saturday in the first round of the All-Japan Invitational Wrestling Meet. Presnell, slumped in a gymnasium office chair, looked like he wanted to be anywhere but there.

"I don&#8217;t think I&#8217;m going to win today," Presnell said, citing a left shoulder still sore from football and a bit of dehydration.

"Beating a good wrestler in Cheston made me more confident," Presnell said. "That, plus rehydrating."

He was one of six DODDS-Japan champion: Three from second-place Kinnick, two from third-place Yokota and one from Zama American.

"For the younger teammates, they get beat pretty bad, but for the veterans, it&#8217;s good to see other things, other types of wrestling you don&#8217;t normally see" in DODDS-Japan or the Kanto Plain Association of Secondary Schools, Presnell said.

Coach Julian Harden said he&#8217;s hopeful Stokes and Johnson can return after the holiday break. Lieberg is weighing whether to skip the season and focus on track and field, an official with his Seoul Track Club told Stripes.

"They&#8217;re running, keeping the weight off, but not having them on the mat hurts," Harden said.