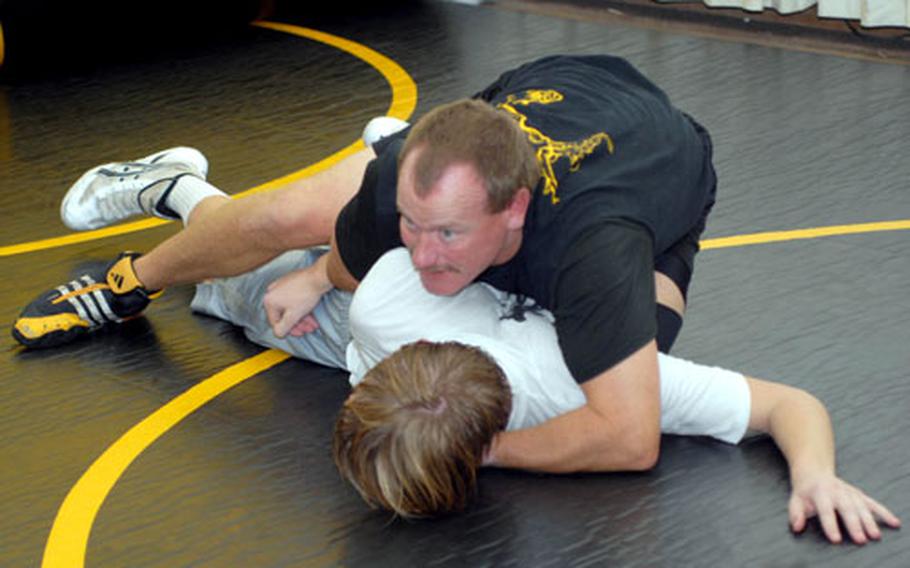 Two seasons ago, with high hopes and a loaded lineup, he and the Kadena Panthers roared into Far East at Yokosuka Naval Base, only to come up against a stone wall in the name of Seoul American. The Falcons swept both team titles, leaving Kadena looking up as the runner-up.

Thus, Schrock says he isn&#8217;t resting on the laurels his Panthers garnered in February, when they achieved their own sweep of the individual freestyle and dual-meet team titles.

Kadena could have done things differently and made mistakes that proved crucial to Seoul American leapfrogging the Panthers, Schrock said.

"You can&#8217;t win championships by making mistakes. I&#8217;m going to use that experience to help us minimize mistakes. If we can do that and capitalize on others&#8217; mistakes, that will go a long way," he said.

Schrock spoke during Monday&#8217;s practice at Kadena&#8217;s musty, humid wrestling room. It&#8217;s the Panthers&#8217; first full season using their own room, instead of the school cafeteria.

In that grappler-producing furnace, a gaggle of experienced veterans who know how to win and a cadre of newcomers and transfers are going about the business of forming a new champion.

Schrock says he likes what he sees so far.

This will also be the first year that the team championships will be awarded by enrollment. Schools of 300 or more will compete for the Class AA title; schools below that will vie for the Class A crown.

That might mean a first Far East team title for Robert D. Edgren of Japan or Osan American or Daegu American in Korea, each of which will field full lineups.

Osan has five girls out for the team, inspired by last year&#8217;s pioneer, Emily Albonetti, who became the first female to place in a Far East tournament. She&#8217;s back as an assistant to David Hemmer.

"I feel like we have the Charlie&#8217;s Angels of Far East wrestling," Hemmer said.

Body fat analyzers to be used to keep wrestlers safe

One tool that Schrock &#8212; and all other DODDS-Pacific coaches &#8212; will wield this season is a body-fat analyzer.

They&#8217;ll be used by wrestling coaches to determine the proper weight at which each athlete should wrestle and how much weight they can cut safely, Schrock and DODDS-Pacific Far East Activities Council chair Don Hobbs said.

"We want to align ourselves as much as we possibly can" with the National Federation of State High School Associations, Hobbs said, adding that every state has some sort of weight certification program, according to NFHS.

Using body-fat analyzers was discussed during February&#8217;s Far East tournament, and coaches "were in agreement on it, some more strongly in favor than others," Hobbs said. It was then discussed at the March FEAC meeting on Okinawa and given the OK.

"We assured [coaches] that there would be a weight certification program in place" for this season, Hobbs said.

There will be weekly monitoring by Daegu American wrestling coach and athletics director Bill Riggs, Hobbs said. "He&#8217;s really helping me out," he said.

"We&#8217;re looking out for the safety of our wrestlers," Schrock said.

Daegu American WarriorsCamp George2008 Far East tournament finish-Eighth in individual freestyle (21 points).Coach-Bill Riggs, third season.Wrestlers to watch-Greg Jones, Sr., 158, defending runner-up at 148 at Far East; Taka McDougal, 101, fifth last year at Far East; El Kim Yoon, 115, fifth at 108 last year at Far East; Evan Lobeto, 129, sixth at 115 last year at Far East; Phillip Cox, Jr., 148, third at 141 last year at Far East (recovering from football knee injury); James Downey, 135, A.J. DeLosSantos, 141.Outlook-Rebuilding. Riggs has less than half the numbers he had out for the team last year, 20 compared to 43, and is trying to fill three weight classes. Enough talent to steal some points and medals, but it likely won&#8217;t be enough to contend for the Class A title until they can fill out the lineup.

Robert D. Edgren EaglesMisawa Air Base2008 Far East tournament finish-Fourth in individual freestyle (43 points), third in dual-meet.Coach-Justin Edmonds, fifth season.Wrestlers to watch-Darrel Morris, 158, third at 148 last year at Far East; Cheston Nurial-Dacalo, 168, third last year at Far East; Tim Pounds, 129, third at 115 last year at Far East; Champagne Tatman, 115; Justin Arrington, 122 (transfer from Kadena); Bryce Edminster, 141; Teddy Lange, 168.Outlook-Reloading/contending. The bulk of Edmonds&#8217; competitive teams of the last two years is gone, but enough grapplers who have learned how to compete are back in place. Maybe not in the same class as the last two years, but definitely a contender for the Class A title.