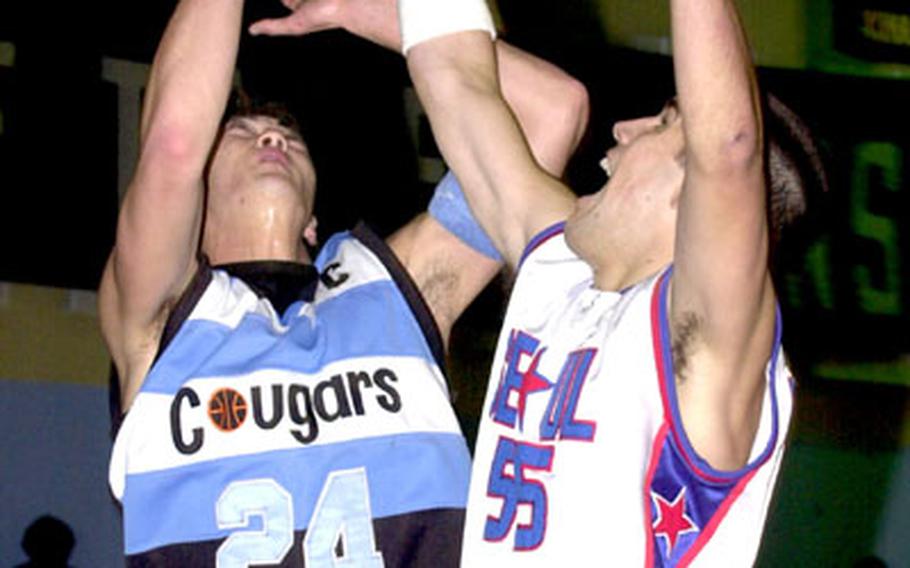 Feliciano scored 12 of his 14 points in the second half, including a key putback with seven seconds remaining. Abramowitz added 22 points as the Falcons rallied from a six-point halftime deficit to win 60-57.

Before the season, Boyd told Feliciano he needed &#8220;double-doubles&#8221; in scoring and rebounds every game. Feliciano had 13 rebounds on Wednesday.

Osan&#8217;s defense caused problems throughout the first half, Boyd said, particularly for All-Far East guard Daniel Chicko, who was held to three points.

In the third quarter, the Falcons outscored the Cougars 22-5.

Osan rallied in the fourth period behind A.J. Scott, who had 11 of his 16 points in the final quarter.

The game began as a shootout between Abramowitz, a transfer from Florida, and two-time All-Far East forward Steve Davis. Each scored 13 first-quarter points; Davis finished the half with 19 but finished the game with 22 points.

Terry Stephens, a transfer from Georgia, scored 11 for Osan.

KADENA AIR BASE, Okinawa &#8212; In the Kadena Panthers&#8217; first two games, both victories, 6-foot-4 center Marvin Myrick has 15 blocked shots. He had six blocks to help the Panthers rally from a 25-13 second-quarter deficit and beat the Oroku Trojan 85-56 in an Okinawa-American League contest.

Wednesday at Kadena Air Base, Okinawa