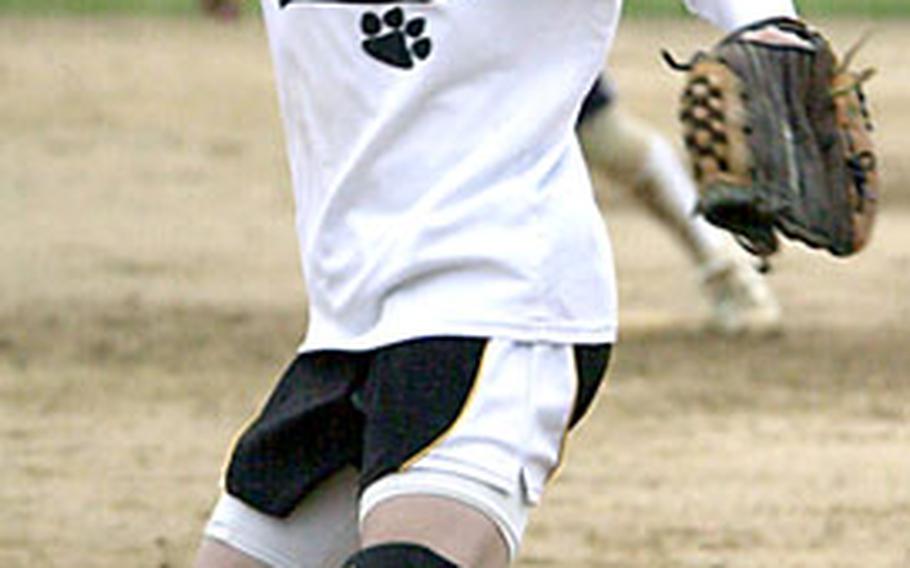 Kadena sophomore Kara Davis delivers against Urasoe High School on Friday at Chibana Recreation Area, near Kadena Air Base, Okinawa. Davis pitched three innings of relief, giving up one hit, one walk and an earned run while striking out five, but Kadena lost 9-1. (Dave Ornauer / S&S)

Kadena sophomore Kara Davis delivers against Urasoe High School on Friday at Chibana Recreation Area, near Kadena Air Base, Okinawa. Davis pitched three innings of relief, giving up one hit, one walk and an earned run while striking out five, but Kadena lost 9-1. (Dave Ornauer / S&S) 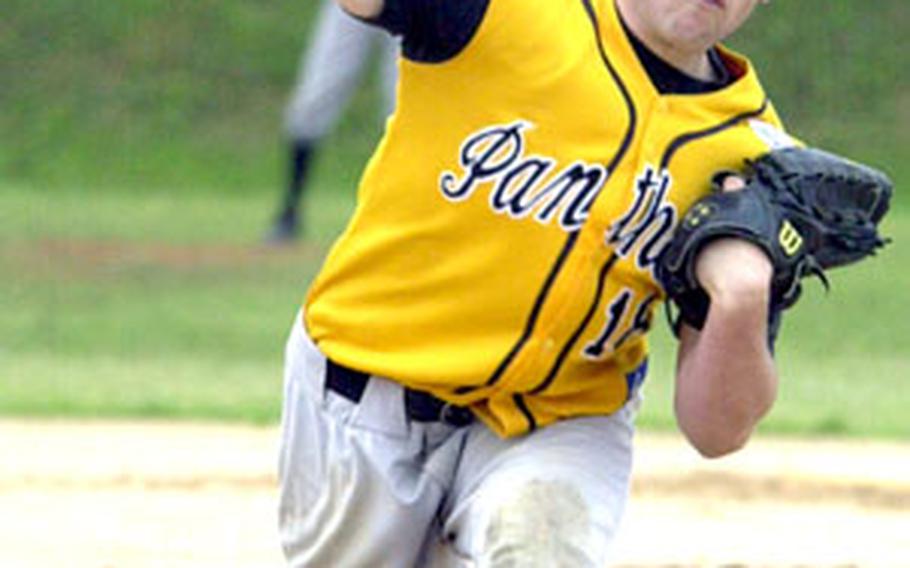 Things weren&#8217;t looking good for the Matthew C. Perry boys soccer team. The Samurai already had five losses to Japan Soccer League Class AA powers this season. And a sixth straight loss looked imminent in Friday&#8217;s match at E.J. King &#8212; the Samurai&#8217;s first Class A opponent &#8212; when Perry fell behind 3-1 on Daniel Goddard&#8217;s penalty kick early in the second half.

But in the closing minutes, the Samurai rallied to win 4-3.

The victory marked a major step, Lange said, in a season of rebuilding for a Samurai team that lost all but three players from last season, including All-Far East Class A strikers Adam Krievs and Chris Allison.

Perry scored first but the Cobras scored the next three goals (two of them by Brian Weathington, who leads the team with three) to push E.J. King ahead 3-1 in the second half.

After Goddard&#8217;s goal, though, it was all Samurai. Andre Fung, who leads the Samurai with four goals, scored. So did Julio Rodriguez. And with 10 minutes left, so did Richard Naseer.

&#8220;I told the guys they had to show heart and they must have gotten the message. Our kids hung in there, kept battling and finally they realized they could win this. &#8230; The kids were pumped up. And we really needed this.&#8221;

Falcons strikers get back on winning trackAfter suffering its first loss of the season two days earlier, a determined Seoul American boys soccer team took the pitch at home Friday against an outmanned Osan American team missing three of its starters.

A 2-0 score might seem like a close shave for the Falcons. But in fact, Seoul American kept pressing the attack, playing 70 of the 80 minutes in the Cougars&#8217; defensive end. Still, they were able to score only twice.

Daniel Burns and Tim Martz gave the Falcons the only offense they would need. The Cougars, the defending Class A champions, lost their sixth straight and fell to 1-7.

Kadena baseball squad edges Japanese teamFollowing its season-opening loss to Kubasaki, Kadena&#8217;s baseball team has cobbled together a two-game winning streak. But the second of those victories hardly was easy.

The Panthers roughed up Okinawa Try for six first-inning runs, only to have their Japanese counterparts chip away at Kadena starter Mike Ward, tying it 6-6 with two runs each in the second and fifth innings and one each in the first and third.

Finally, with darkness approaching in the bottom of the sixth, Kadena decided matters. Chad Cameron scratched out an infield single, stole second and third and, with one out, trotted home on Travis Thibault&#8217;s loop single to right field.

It was the sort of game, coach Allan Mizell said, that gives a coach gray hairs.