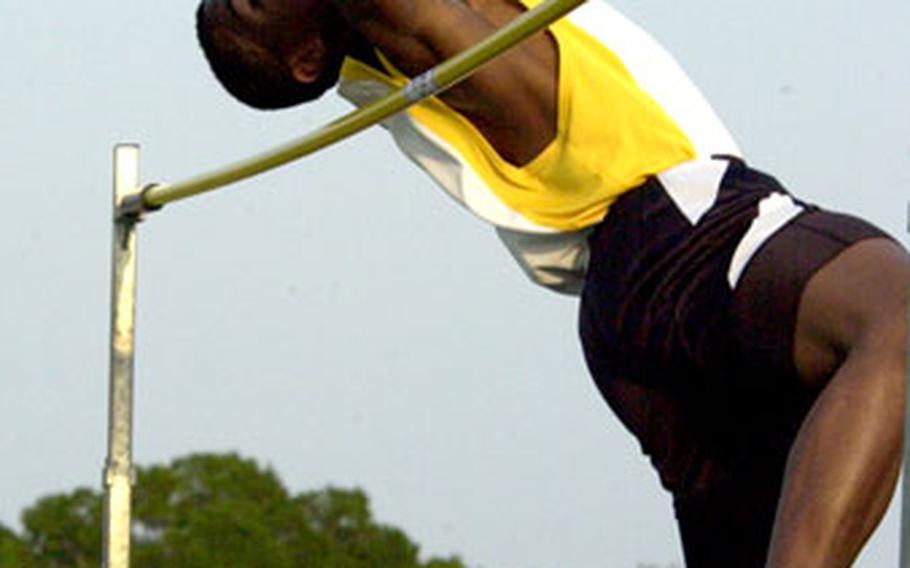 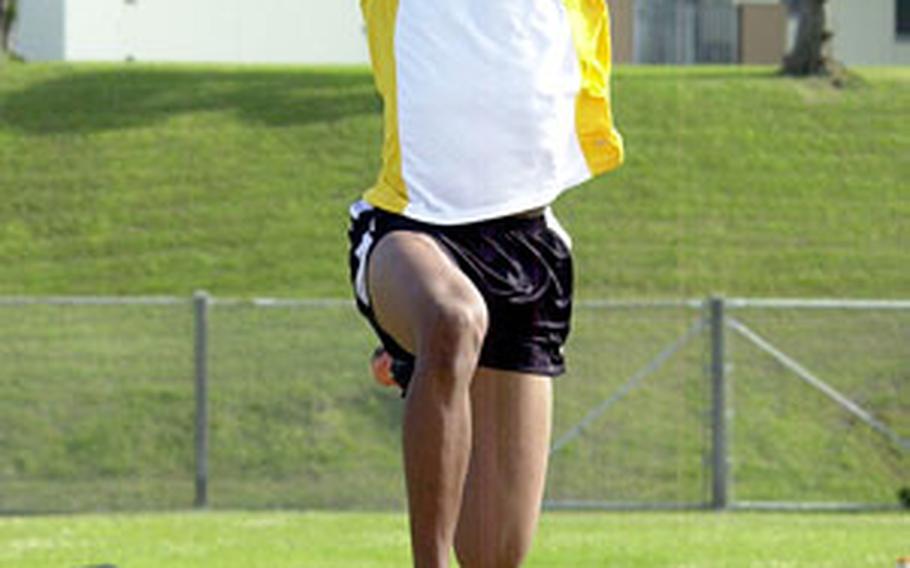 Kubasaki senior Steven Thompson missed the last month of football season and the first and last two weeks of basketball because of injuries and a bout with mononucleosis.

In his first competition of the Okinawa Activities Council spring track season on Friday, he looked as if he&#8217;d hardly missed a beat, winning the high jump with a leap of 6 feet, 1 inch, edging Pacific record-holder Marquis Newton of Kadena by 1 inch.

Kadena&#8217;s boys overwhelmed the field in Friday&#8217;s meet, the last before the Petty meet, which will include 14 schools from Japan, Guam, the Philippines, Taiwan and Okinawa. Kadena beat second-place Kubasaki 85-53.

Also completing a distance sweep on Friday was Kubasaki&#8217;s Beth Nielsen, who came within 10 seconds of the island mile record by running the 1,600 in 5 minutes, 47 seconds. She rallied to win the 800 and won the 3,200 comfortably.

The Dragons girls easily prevailed 82-38 over Zion Christian Academy. Dominique Henson won the 100 hurdles, Michelle Daniel the 200 and Kyera Tennyson the long and high jumps for Kubasaki, which also swept all three relays.

Kinnick freshman turns in Devil of a pitching performanceNile C. Kinnick&#8217;s baseball team lost junior pitcher Clay Atchley to a broken right leg in their March 13 opener and dropped their first five games. The team sought something, anything, to put it on some sort of winning track.

That came Friday night in the chill of Misawa Air Base, where freshman Tommy Coyne tossed a five-inning no-hitter as the Red Devils blanked Robert D. Edgren 11-0.

Eagles boys soccer team finally puts blemish on Yokota&#8217;s recordAlmost a month into the Japan Soccer League season, Yokota&#8217;s boys had won their first seven matches. That streak ended, however, after taking a road trip this past weekend to Misawa Air Base, where Robert D. Edgren (4-2-2) tied the Panthers 2-2.

Yokota went up in the first 10 minutes on goals by Andreas Cabral and Bronson Bailey, who each have 10 on the season. But then Patrick Pezoulas scored his ninth goal of the season and Nathan Fine his seventh and the Eagles&#8217; defense buckled down.

&#8220;We got out on them quickly but after that, their sweeper took away a lot of offensive opportunities and we couldn&#8217;t find the net. Hats off to them. They played a great match.&#8221;

&#8220;They were much tougher the second time around,&#8221; Cannon said after the Falcons (7-1) overcame a lineup shuffle by the Warriors (2-2-1) that had senior Joanne Youngblood, normally a midfielder or forward, playing on the backline to bolster the Taegu American defense.

Though the Falcons prevailed and took 13 shots, Youngblood&#8217;s presence made every shot that much tougher, Cannon said. &#8220;They were tenacious and it really helped them to have her back there. She&#8217;s a tough player. They improved a lot,&#8221; Cannon said.

Also shuffling the lineup were the Falcons boys, who&#8217;ve been missing six players, including three starters, the past few weeks. Jessie Suh, who normally plays up front, has been used &#8220;all over the field&#8221; by coach Steve Boyd; he finally used Suh at forward in Friday&#8217;s 6-0 victory over Taegu and Suh responded with two goals.

&#8220;Putting him back up front made a difference,&#8221; said Boyd, whose Falcons (7-2) also found themselves bulking up the roster by bringing back a handful of players who&#8217;d been cut during preseason tryouts.