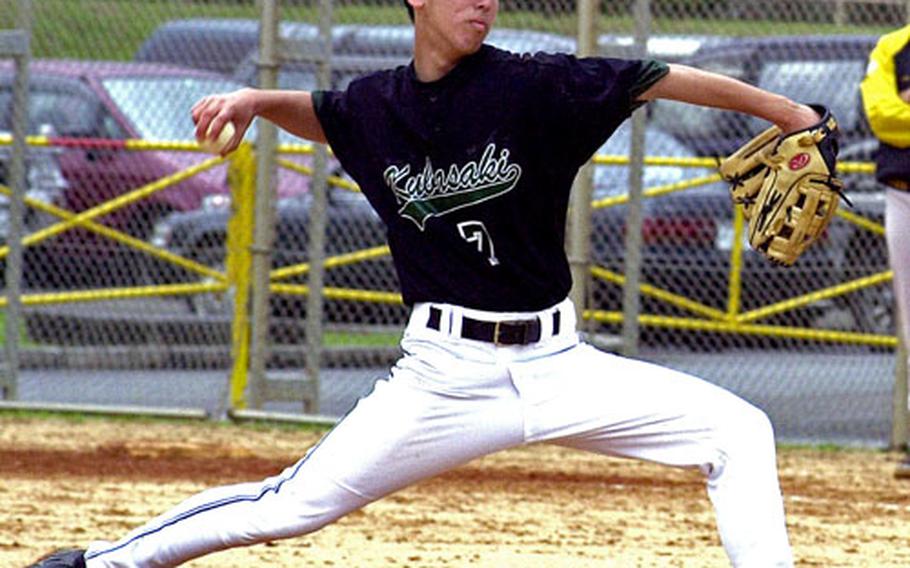 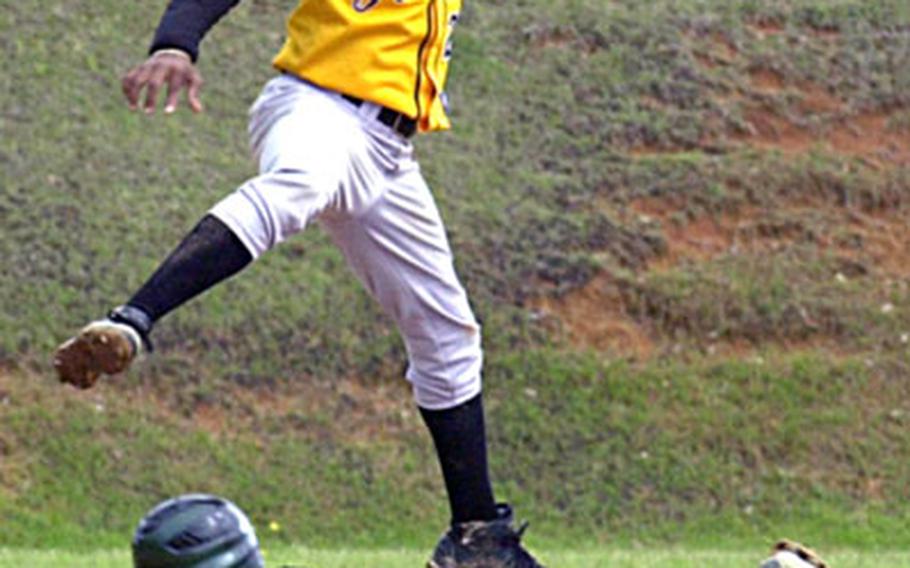 The dawn of a new era in Okinawa high school baseball brought with it a surprising result: Kubasaki finally beat Kadena.

After losing 12 straight to the Panthers dating to the 2003 season opener, the Dragons finally solved the Kadena puzzle. Wataru Smiley pitched into the seventh inning, striking out seven, and Michael Fulwiler cracked a first-inning home run in Kubasaki&#8217;s 18-4 victory at Chibana Recreation Area.

Smiley&#8217;s performance was a pleasant surprise as well. The plan, he admitted afterward, was for him to pitch just two innings. Instead he almost tossed a complete game.

Smiley said being the first pitcher to beat Kadena felt good and that he was able to do what his coach asked &#8212; keep Kadena hitters off-balance &#8212; by throwing mostly sliders.

The victory came at the start of the first season in which Kadena&#8217;s and Kubasaki&#8217;s baseball and girls softball programs are entirely under the umbrella of Department of Defense Dependents Schools-Okinawa. The programs have been run collectively by the community, the schools, 18th Services at Kadena Air Base and Marine Corps Community Services.

Under cloudy skies with occasional showers, Kadena&#8217;s softball team kept up its unbeaten run over Kubasaki, spanning 45 games over three seasons, by blanking the Dragons 16-0 in a game ended by the 10-run mercy rule after five innings.

Both games started late thanks to the weather. Former New York Mets World Series hero Ron Swoboda was on hand to throw out the ceremonial first ball before the baseball opener.

Kadena&#8217;s softball victory came behind the arm of Kara Davis, who went seven innings with seven strikeouts, most coming just when the team needed them, coach Ken Hudson said.

The victory came despite the team having had only 10 practices before the opener, he said. &#8220;We had some good plays on defense and we were aggressive on offense, running them into mistakes.&#8221;

Catcher Alison Montes de Oca batted 2-for-4 with a walk and a home run for Kadena. Kubasaki&#8217;s one bright spot, Michelle Acosta, went 2-for-3.

&#8220;This will be a good test for us,&#8221; said boys coach Steve Boyd, whose Falcons reached the KAIAC postseason tournament final in April, losing a shootout to Seoul Foreign 3-2.

The girls languished behind the unbeaten Crusaders in the regular season but had better success in the KAIAC tournament final, edging Seoul Foreign 1-0.

Like the boys, Seoul Foreign&#8217;s girls have won all seven of their matches and have five girls with six or more goals, led by sophomore Megan Kim (12).

Seniors Margaret Nurse and Whitney Grandy top the Falcons with four goals each. Cannon points to Grandy as key to the team&#8217;s fortunes. She sat out last season, after moving to Mountain Home Air Force Base in Idaho, but returned to Seoul American for her senior year.

Yokota boys still unbeatenAlso enjoying a flying start is the Yokota boys soccer team, which won the Japan Soccer League title three years running starting in 2001 and reached the Far East Class AA tournament final in 2002 and &#8216;03 before falling on hard times the past two seasons.

Paced by Scott Monahan (9 goals), Bronson Bailey (7 goals) and Stefan Welch (5 goals, 8 assists), the Panthers are 5-0 for the first time in three seasons. Good scoring balance, playmaking and the goalkeeping of first-year netminder Jim Scott have coach Tim Pujol eyeing a return to the league championship.