Pacific H.S. roundup: Kinnick returns to top of standings after down year in '05 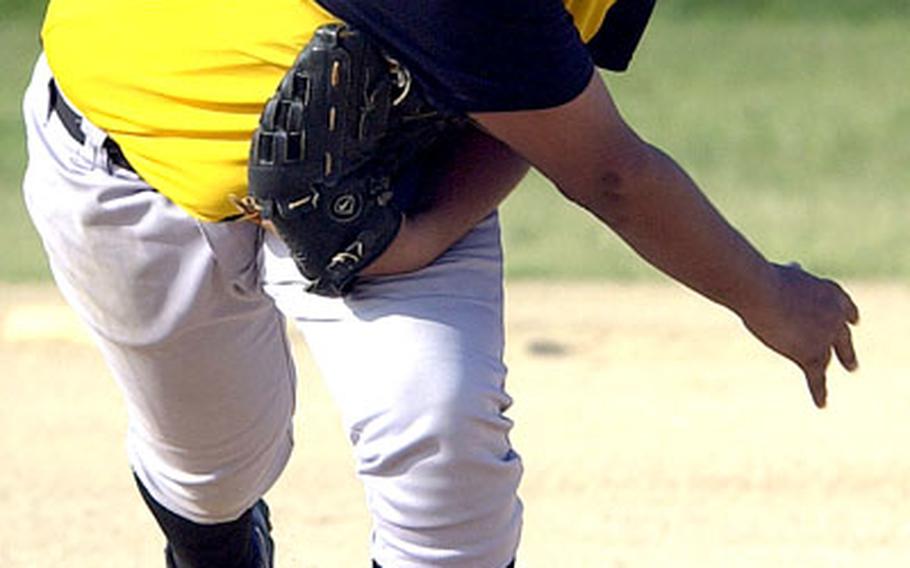 Kadena sophomore Kara Davis delivers against Koza during Tuesday&#39;s game. Davis improved to 3-2 on the season, pitching a five-inning complete game and giving up four hits, two walks and no earned runs while striking out six in Kadena&#39;s 12-2 win. (Dave Ornauer / S&S)

The Nile C. Kinnick Red Devils, who were pedestrian last year, have returned to dominance and are riding atop the Japan Soccer League with a run that coach Nico Hindie says has surpassed even his goals for this season.

Mariko Wood scored her 10th goal of the season and posted her team-leading 10th and 11th assists, boosting the Red Devils past Zama American 3-1 on Wednesday at Zama American High School.

It&#8217;s a far cry from the team that finished 8-7-4 and placed seventh in the Far East Class AA tournament last season, after reaching the Far East semifinals in 2004.

The Zama victory came in the Red Devils&#8217; next-to-last match before the 10-day Easter break that starts Friday. Kinnick entertains the American School In Japan on Thursday at Ikego Heights Naval Housing Facility.

Kadena softball team posts first victory vs. Japanese teamFor the first time in the two-year history of the school&#8217;s fastpitch program, the Kadena Panthers girls softball team can say it has defeated a Japanese squad.

Sophomore right-hander Kara Davis allowed four hits and helped herself by driving in three runs as Kadena roared past Koza High School&#8217;s B squad 12-2 in a game ended after five innings by the National Federation rulebook&#8217;s 10-run mercy rule.

&#8220;It feels good, for once,&#8221; said senior shortstop Stacey Ware. She&#8217;s been with the Kadena program for three years, the first when the team played slowpitch and then last season, when Kadena went to fastpitch for the first time but lost every encounter with a Japanese team.

The Japanese softball culture and that of Kadena High School are as different as daylight and moonlight, Ware said.

What does it take for Kadena or its Okinawa Activities Council arch-rival Kubasaki to overcome such odds?