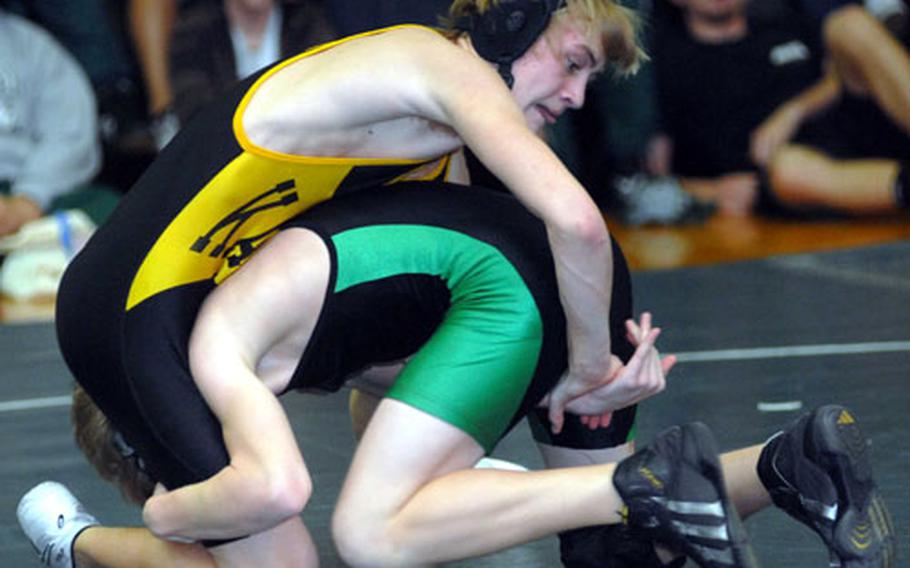 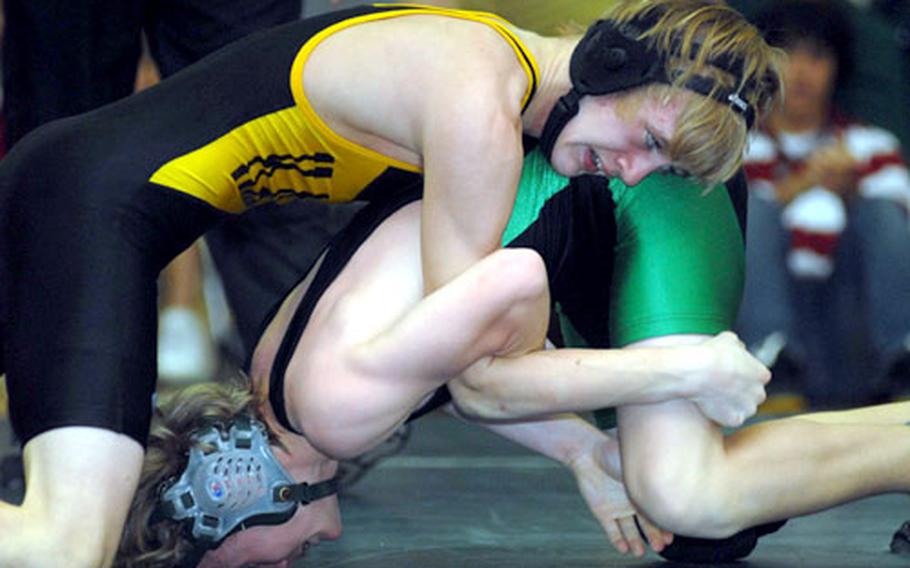 No problem &#8212; there are plenty of new faces to take their place.

&#8220;Kids step up and say, &#8216;Coach, I want to wrestle this year.&#8217; And we got lucky with transfers,&#8221; coach Steve Schrock said of holdovers Bush and Lautenschlager, freshman Ahner and transfers Henderson and Bishop.

Ahner scored a 1-0, 2-0 decision over Christian Academy In Japan&#8217;s Sho Hamano for the heavyweight gold.

Lautenschlager, who&#8217;d lived in the shadow of 2008 Far East champion Harry Bloom, broke out by pinning three of four foes to win the 141-pound title.

Henderson had tried three times to beat Kubasaki&#8217;s three-time Far East champion, Scott Wood, and failed. Twice on Saturday, once by pin in the finals, he finally solved the Wood mystery.

Bishop probably had the toughest route, and perhaps formed a rivalry with fellow sophomore Jon Goddard of Kubasaki in the process.

Bishop needed a crotch-lift move to score a two-point tilt in the final 10 seconds of a 5-4, 6-4 decision.

Jesse Crockett and Michael Gilliam scored crucial pins at 215 and heavyweight, respectively, rallying Osan American from a 31-22 deficit to upset the Falcons 32-31 in Saturday&#8217;s season-ending tri-meet at Daegu American.

&#8220;Congratulations to Osan,&#8221; Falcons coach Julian Harden said, adding that the Cougars have the potential to make a deep run at a school-first Far East Tournament Class A title.

Wagner, the son of 1986 Yokota graduate David Wagner, hit six three-point baskets and finished with 24 points as the Cobras edged the Panthers 49-46.

&#8220;They finally put it together, had the chemistry and intensity going,&#8221; first-year Cobras coach Mike Milling said.