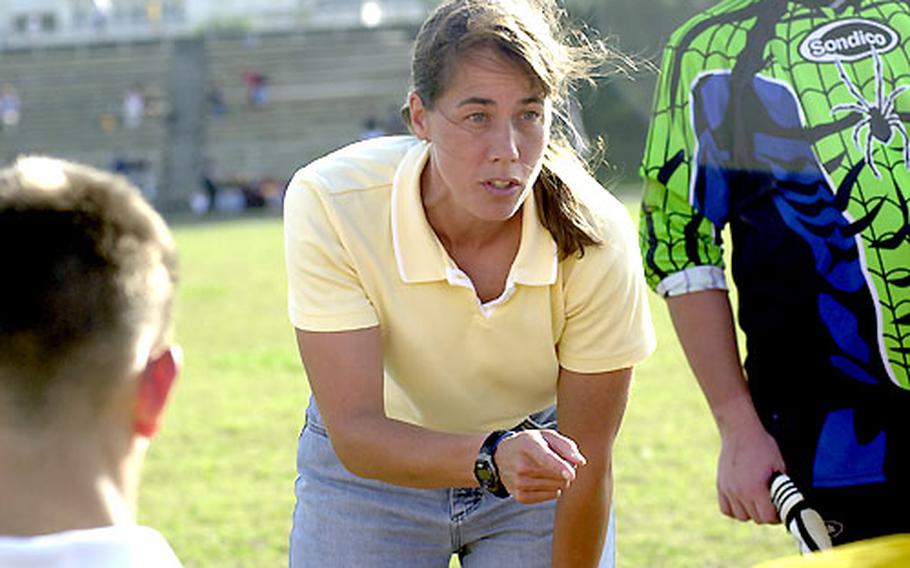 KADENA AIR BASE, Okinawa &#8212; Scott Knutson drove the ball up the right side, past the Kubasaki defense, and ripped a shot past goalkeeper Brian Eisenmann for the first goal of the match.

About 50 minutes later, Kadena left the field with a 3-2 victory that gave the Panthers a split in the season series with their archrivals.

Fitzpatrick, all smiles and eyes shining, gathered her black-and- gold-clad troops on the sideline, congratulating them with a brief, no-nonsense speech. No players looked away while absorbing compliments and constructive criticism.

Fitzpatrick isn&#8217;t just one of the boys. Players characterize her as a leader, a mentor who respects them as equally as they hold her in strong regard.

After picking up the game at age 9, Fitzpatrick earned All-State honors in 1980 and &#8217;81 as a striker and midfielder for Ballard High School in her hometown of Louisville, Ky., as a member of the school&#8217;s boys soccer team. No girls program existed at the time.

She played collegiately at Central Florida from 1982-86, often serving up corner kicks to Michelle Akers, who would go on to fame with Team USA.

After college, Fitzpatrick began a 15-year journey of coaching boys and girls teams, from the youth activities level to high school.

She cut her teeth in the Department of Defense Education Activity system by guiding the boys team at Wiesbaden, Germany, before transferring to Okinawa two years ago with her husband, Mike, and their three children &#8212; Aaron, 12, Andrew, 7, and Brooke, 3.

They split time on the sideline last year, as Fitzpatrick devoted time to her daughter. But this spring, she&#8217;s conducted the show.

Fitzpatrick appears to be debunking that belief.

&#8220;She has an excellent background, where her experience comes in,&#8221; said Kubasaki coach Butch Spain, who&#8217;s been affiliated with that club for more than 20 years.

&#8220;The team has developed well from last year, much better controlled, better disciplined. They&#8217;re a seasoned team. As far as her association with them, it seems to be very positive.&#8221;

The Panthers, after starting the season with three straight wins, fell for the third straight time, as Sola College touched Kadena pitching for two homers and 10 hits. Eric Rausch fanned five and gave up just one walk in a losing cause.

Losing for the fifth time in five tries, the Dragons gave up 14 hits and 12 walks, managing to post four runs in the second inning but that was it. Justin Daughtery went 2-for-3 with an RBI to pace Kubasaki.

A three-run third inning broke the backs of the Panthers. John O&#39;Hearne went 3-for-4, scored once and drove in a run, while Tyler Schmidt went 2-for-3 with a homer and an RBI and Ryan Norwood was 2-for-3 with an RBI.

The Panthers&#39; skid began when Yomitan, a Japanese team, scored eight first-inning runs. John O&#39;Hearne shut down Yomitan the rest of the way, allowing just three batters to the plate in the next three innings. Darius Lewis walked, stole second and scored on a wild pitch for Kadena&#39;s only run.

Both games were halted in the fifth inning due to the mercy rule. Aki Ando was 6-for-6 and Chris Terai 5-for-5 in the opener, while Jens Halling batted 5-for-8 and Matthew Ireton 4-for-6 on the twin bill.

Matt Beard and Mike Bernard powered the Eagles&#39; offense in a doubleheader sweep of the Red Devils. Beard was 6-for-6 with seven RBIs, three doubles and two homers, while Bernard went 6-for-7 with four doubles, a homer and three RBIs. Chris Tucker pitched one-hit ball, striking out six and giving up a walk in the opener, while Chris Plyler and Craig Burgess combined on a seven-hitter with four walks and four strikeouts in the nightcap.

Kimberly Daniel scored her team-high fifth goal in the 41st minute and Esther Yun her second in the 70th as the Dragons (3-6-2) finished the season on a two-game winning streak. The Tigers closed with a seven-game skid after winning their first five matches.

After fading in the opener of a Japan Softball League three-team twin bill, the Red Devils bounced back against the Samurai, as Kristen Mihako, Megan Runge and Jessica Northam each went 3-for-4, Mihako and Northam with four RBIs apiece.

Ellen Walsh led the way for the Panthers, scoring three times, while Cari Bruschuk and Shannon Vitarbo each came across twice. Sarah Boeder hit the plate mat for an automatic one-pitch strikeout five times in the opener for Yokota, while Elizabeth Wells hit the mat three times and Arianne Sacramento scored twice for the Diamonds.