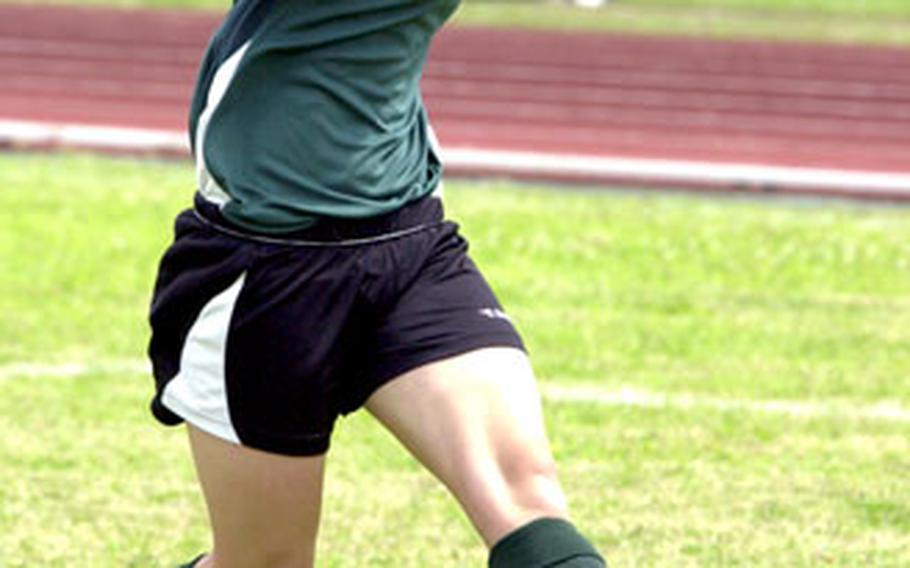 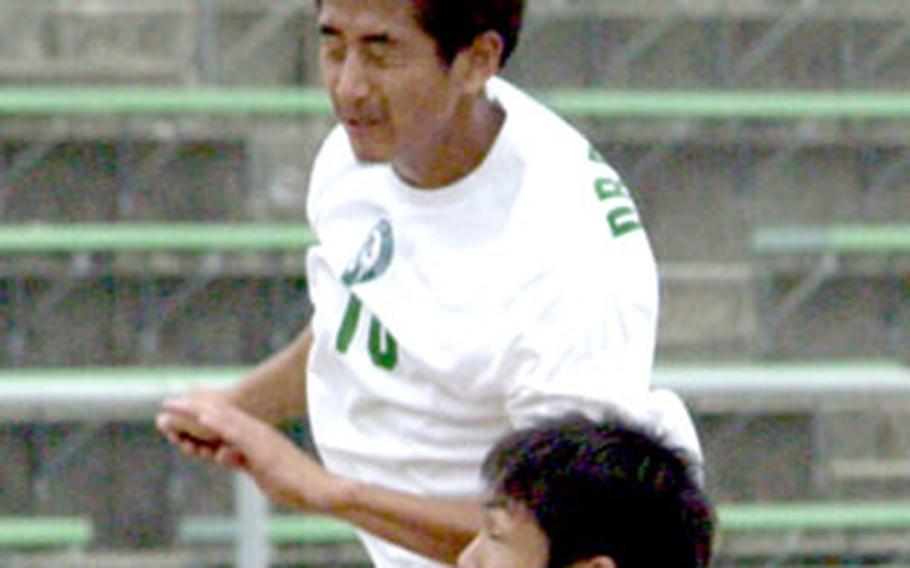 Kadena junior Jen Abel, left, fires a shot past a Naha Shogyo defender and into the net for one of her two goals during Saturday’s match at Kadena Air Base, Okinawa. Abel also had three assists as Kadena won 7-0. (Dave Ornauer / S&S) So the Eagles made school history on a blustery Saturday morning at Misawa Air Base&#8217;s Eagles Field: They beat Yokota in a regular-season Japan Soccer League game for the first time, 3-2.

The Panthers took advantage of the westerly winds that were at their backs in the first half. Andreas Cabral scored his 11th goal and Stefan Welch his seventh. Scott Monahan and Bronson Bailey recorded the assists.

Then with the wind at their backs in the second half, the Eagles responded. Rather, Patrick Pezoulas responded, scoring a natural hat trick to give him 12 goals on the season. Alan Jones assisted on two of the goals and Brandon Green on the other.

Kinnick girls coach: Edgren a threat to win Class A titleWhile Nile C. Kinnick&#8217;s girls scored their fourth straight shutout of Edgren thus far this season on Saturday, it was a far cry from the Red Devils&#8217; 10-0 and 7-0 triumphs two weeks earlier on their home turf.

Kinnick topped the Eagles 3-0 on Friday and 4-0 on Saturday, games Red Devils coach Nico Hindie characterized as &#8220;much tougher.&#8221; He also feels Edgren, which an enrollment drop moved to the Class A level, can make some serious noise in May&#8217;s Class A tournament at Iwakuni Marine Corps Air Station.

Edgren finished the weekend 5-3-1, while Kinnick improved its JSL-leading record to 9-0.

Seoul American&#8217;s baseball game with Osan American was suspended in the first inning and will be made up on Thursday at Osan Air Base, said Cougars coach Rick Mitchell.

Similarly, Taegu American&#8217;s girls softball games with Seoul American and Pusan American were scotched. Warriors assistant coach Bob Miller said the games tentatively have been rescheduled for April 22, when Taegu and Pusan will play each other twice; and on the 29th, when Taegu faces Seoul American twice.

In games that were completed, Taegu downed Osan 18-6, Seoul defeated Pusan 12-5 and Pusan topped Osan, though no score was available. In the tight race for first place, one game separates the top three. The Warriors now lead the league at 5-2, followed by Pusan (5-3), Seoul (4-3) and Osan (1-7).

Injuries impeding Kadena boys; Seoul American girls progressKadena Panthers boys soccer team members entered the season with a fire in their collective bellies, relentless in their quest to regain the Far East Class AA tournament title they lost in May after winning it in 2003 and &#8217;04.

But they&#8217;re finding the early going just as rough as last season: Injuries are taking their toll. The latest: Senior Nathan LaGrave pulled a quadriceps in his right leg and junior Dean Harkum fractured a finger in his right hand.

And the Panthers endured one of their toughest weeks since the 2002 campaign. They lost to Kubasaki last Wednesday, for the first time since 2003, and their latest victory, 3-2 over Yokatsu, came in a penalty-kick shootout.

In the Panthers&#8217; six victories, the junior has tallied 15 goals, four more than Dianne, who scorched the nets for 66 last year.

&#8220;She&#8217;s my hero,&#8221; Dianne said of her younger sister after Kadena swept a pair of matches on Saturday, shutting out Hentona 8-0 and blanking Naha Shogyo 7-0. Jennifer scored six goals and Dianne five in the two matches.

Jennifer is more than halfway to her 2005 season total of 29 goals. Coach Hoa Nguyen cited two reasons for her scoring increase.