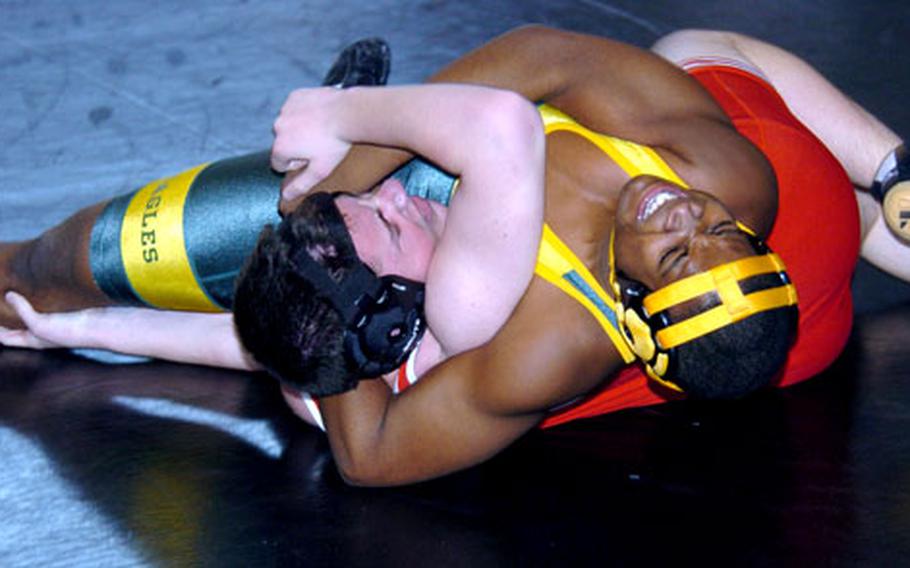 Sometimes the most important contribution in a game doesn&#8217;t show up on a team&#8217;s stat sheet.

Lang helped Edgren rally from a 14-7 first-quarter deficit, as the Eagles outscored a Panthers team missing two key starters 17-5 in the second quarter. Yokota led by one after three quarters but Edgren turned up pressure on Yokota&#8217;s guards in the fourth quarter to pull ahead in the end.

Besides the Panthers&#8217; not having injured center Caiveon Thomas (ankle) and Cameron Shelton (hip pointer) in the lineup, Edgren is &#8220;a decent team. We&#8217;re just short of firepower,&#8221; Yokota coach Paul Ettl said.

Ettl said he&#8217;s hoping Thomas and Shelton will be healthy enough to make the trip in two weeks to the Eagles&#8217; Nest at Misawa Air Base. Thibert&#8217;s lineup could by then be bolstered by the return of injured starters Zach Latimore and Mark Young.

A full lineup is no guarantee; Yokota&#8217;s three losses last season came at Misawa the first weekend of December.

Marisa Davis led the way with 10 points and the Red Devils led the Cobras by as many as 12 on their way to a 39-33 victory at Iwakuni Marine Corps Air Station.

Okiso, a men&#8217;s team that played as the Okinawa Suns and finished second in the Joint Military Athletic Conference last season, pounded Kubasaki 92-71, outscoring the Dragons 57-24 in the middle two quarters.

Kinnick takes second wrestling title of seasonThe Japan wrestling season continued to be unpredictable as Nile C. Kinnick, which lost 36-28 on Dec. 6 at Yokota, got the Panthers back 32-28 in Saturday&#8217;s Kanto Plain Association of Secondary Schools dual-meet tournament at Camp Zama.

The victory gave the Red Devils and Yokota a split of the four tournaments contested this season: Kinnick won the opener Dec. 2 at Edgren while Yokota won the next two, on Dec. 9 at home and Dec. 16 at Sasebo Naval Base.

Yokota coach Brian Kitts called the final &#8220;hands down one of the best dual matches I&#8217;ve been a part of. Everybody wrestled their hearts out. They came out ahead. It was their day.&#8221;

Seoul American coach Julian Harden said the Korean referees who&#8217;ve worked DODDS-Korea matches the last two years put him in touch with the federation. On their way to Saturday&#8217;s meet, the Falcons stopped at the federation and worked out with them, then on Saturday, the 30-plus wrestlers engaged in round-robin exhibition bouts against Seoul, Taegu and Osan American.

&#8220;Our boys got a good workout. They learned a lot,&#8221; Taegu American coach Bill Riggs said, adding that he plans to have his team visit the federation for practice sessions.

Harden said his wrestlers got thrown around pretty well by the Koreans, five of whom are ranked in the top four nationally in their age groups.