Kubasaki senior guard Michael Bennett is fouled on his way to the basket by Itoman guard Koji Kakazu during Saturday&#39;s playoff game in the Okinawa-American Shootout. Bennett and the Dragons beat the Raging Billows 86-54. (Dave Ornauer / S&S)

Kubasaki senior guard Michael Bennett is fouled on his way to the basket by Itoman guard Koji Kakazu during Saturday&#39;s playoff game in the Okinawa-American Shootout. Bennett and the Dragons beat the Raging Billows 86-54. (Dave Ornauer / S&S) 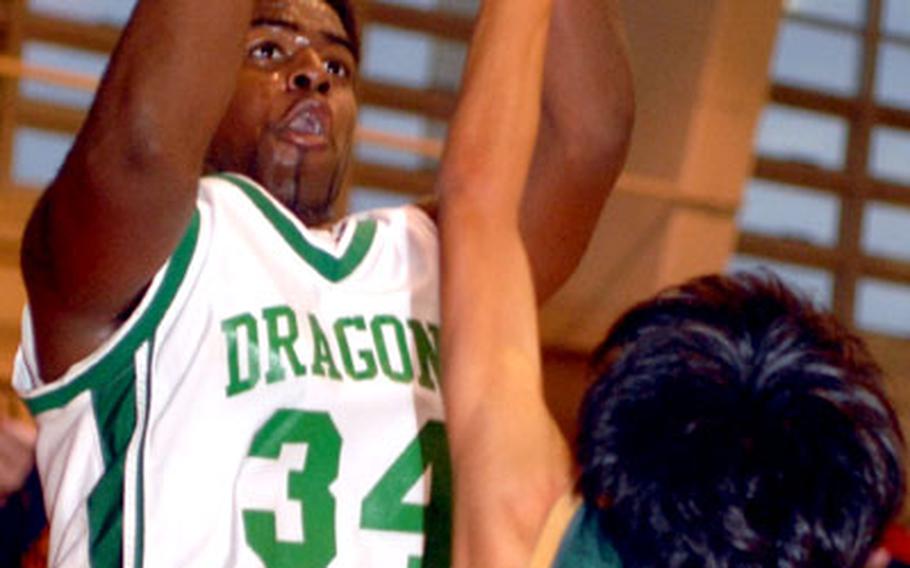 The teams traveled 10 hours by bus, the boys to Kobe and the girls to Osaka, and came away with repeat WJAA tournament championships at the expense of Canadian Academy in Saturday&#8217;s finals.

&#8220;It was nice that we were able to do it,&#8221; coach Daren Schuettpelz said after the boys won 71-36 at Canadian Academy, behind four core seniors, Fernando Rico, Dominique Johnson, Keith Williams and Marquis Singletary, who&#8217;ve been together four seasons.

Suriben had 12 points, six rebounds and four steals, as Canadian focused on bottling up her senior sister Kristia.

&#8220;They shut her down, and Riza rose to the occasion,&#8221; Cobras coach Michael Seitz said. He also credited Samantha Bossert, who had six points and five rebounds. &#8220;Sam gets her points and rebounds every game. She&#8217;s consistent across the board.&#8221;

E.J. King arrived at Misawa Air Base with four wrestlers after a long train and two-flight journey from Sasebo Naval Base; Noheji came from one stop down the Tohoku rail line with six in tow.

&#8220;It was nice to have almost a full team,&#8221; Wright said of a squad that includes transfer Craig Bell of Matthew C. Perry and defending Far East champion David Heitstuman. They spent time trading tips with their Japanese counterparts, even working out with them between duals.

The tournament was held despite more than 20 inches of snow that fell in the preceding three days. Nearby Taneichi High School took first place in the tournament, followed by Aomori High School and host Edgren.

When the fireworks were done, Kitanaka hit 18 three-pointers, 11 by Kishimoto.

It was like that all weekend in the 16-team tournament, featuring 12 Japanese teams and Kadena&#8217;s and Kubasaki&#8217;s girls squads.

Not as large and physical as their American counterparts, Japanese teams have long relied on quickness and shooting accuracy.

&#8220;They play good team ball. Our kids see those fundamentals and good team ball and hopefully it will rub off on some of us.&#8221;

How does a team stop that sort of attack?

Zama, Kinnick wrestlers should &#8216;surprise&#8217; in Far EastZama American and Nile C. Kinnick have been &#8220;off the radar,&#8221; one coach said, for much of the season, and the teams finished third and fourth in the field in Saturday&#8217;s St. Mary&#8217;s International School Invitational Wrestling Tournament.

But don&#8217;t overlook Zama American, which got gold medals from 215-pounder Daniel Polaski and heavyweight Steven Wood, and Kinnick, with golds from Cameron Butts (135) and Philip Bayani (141), in the Far East meet Feb. 13-16 on Okinawa.

That came a day after the Falcons routed Korea International 59-5, a game that Hicks said was &#8220;painful.&#8221; She also announced her intention to field JV players for the rest of the KAIAC regular season, and to play games against more competitive Korean and military teams.