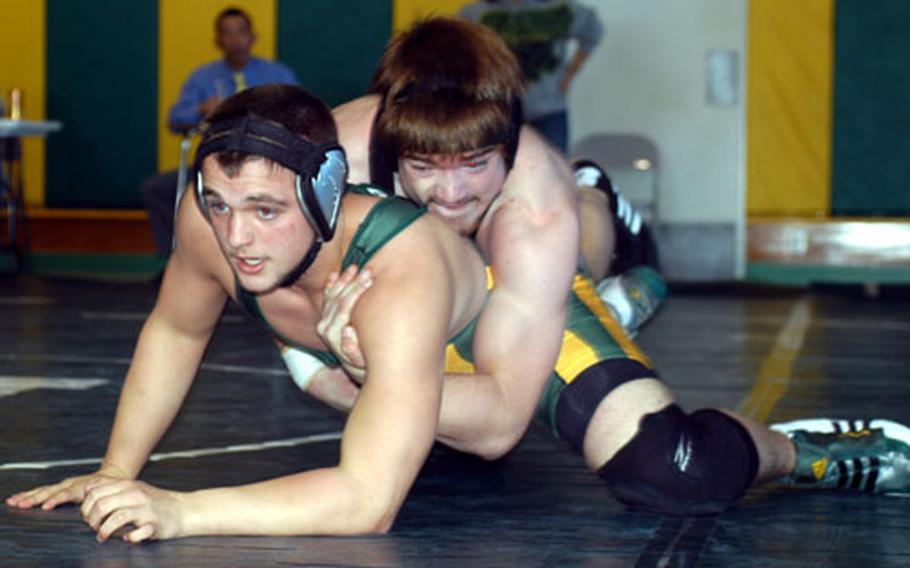 Take freshman Julian Lopez of Daegu American&#8217;s wrestling team. The 180-pounder hit the mat Saturday for his varsity debut as an injury replacement at Seoul American High School with one specific instruction from coach Bill Riggs: &#8220;Stay off your back.&#8221;

Lopez also picked up a victory by walkover against Osan American in the Department of Defense Dependents Schools-Korea season-opening tri-meet.

The three are to battle again on Friday and Saturday at Daegu American, a meet that will feature E.J. King of Japan, another small school with a rebuilding program.

CAMP GEORGE, South Korea &#8211; Coach Steve Boyd&#8217;s Seoul American boys basketball team has broken out of the gate with an 8-1 record, the most recent victories by 62-25 at Taejon Christian International on Friday and 86-56 over Daegu American on Saturday.

Those victories came without three starters: seniors Daniel Burns and Chris DeFrancisco, who took SATs Saturday in Seoul, and Andrew Luna, recovering from a knee injury.

After beating E.J. King by five points on Friday, the Kinnick girls couldn&#8217;t buy a basket in Saturday&#8217;s rematch. The Red Devils shot 11.6 percent from the field and 1-for-12 from the foul line in a 45-18 loss. Kinnick was the only DODDS team to beat E.J. King last season.

The Cobras boys also reversed a Friday outcome. Yokota beat E.J. King 64-49 on Friday, but the Cobras rebounded to edge the Panthers 64-63.

Thought to be rebuilding after losing eight players off the team that went 34-2 last season, Zama American&#8217;s boys are 3-0, the latest victory over Robert D. Edgren 62-52 Friday at NAF Atsugi.