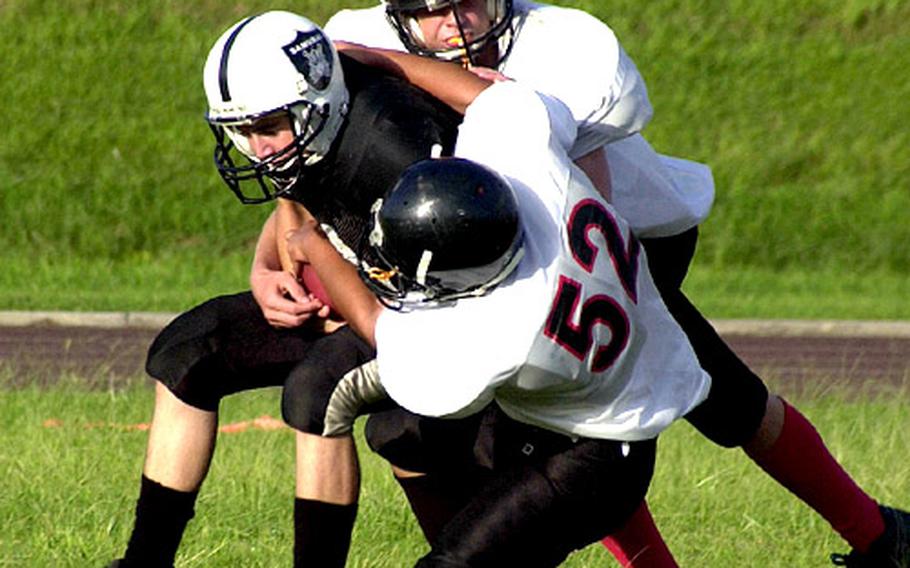 Kubasaki Samurai quarterback Justin Daugherty (4) gets collared by a pair of Kadena Buccaneers defenders, led by Bryan Tipton (52), during Monday&#39;s game. Tipton and the Bucs defense racked up three sacks and three turnovers, holding Daugherty to 3-for-9 passing for 52 yards as the Buccaneers blanked the defending champion Samurai 33-0. (Dave Ornauer / S&S)

After going 8-0 against the only Japanese entry in the Okinawa High School Athletic Association, the Kubasaki Shogun finally fell to the Ryukyu University Stingray 26-13 on Monday.

The Stingray, in the unaccustomed position of being tied for the league lead with the Kadena Islanders, served as a virtual punching bag their first six years in the league for their American foes, going 0-23 and being outscored 595-101.

But the Stingray seemed to play the Shogun closer than they did other teams, including a 7-0 loss in overtime last season.

After claiming wins over the Islanders in the 2001 and &#8217;02 seasons, Ryudai posted its most dominating victory yet in downing the Shogun behind a solid running game that posted 317 yards and four TDs on 57 carries.

He recalled something that former Buccaneers coach Bill Mierzejewski told him several years ago, that if the Stingray &#8220;ever got serious about building a program, they will never lose a game.&#8221;

KADENA AIR BASE, Okinawa &#8212; The Buccaneers (1-1) got their first win of the season and kept the defending champion Samurai winless, catching a glimpse of the future on Monday.

&#8220;He doesn&#8217;t care where he plays, he just wants to play. He has a great attitude. Every day in practice, he works hard, no matter where we put him. Today, we put him at tailback, gave him an opportunity and he did an awesome job.&#8221;

His teammates call him &#8220;Little A.J.&#8221; because he reminds them of current senior starter A.J. Morgan, who ran nine times for 44 yards and two scores, tossed a 48-yard TD pass to Heath Anderson and picked off a Samurai pass.

The Shogun visit the Islanders (1-0) on Friday, while the Samurai host the Stingray on Saturday.