Kubasaki Dragons running back Tim Gardner is wrestled down for a 9-yard loss by Dominique Broussard of the Kadena Panthers during Friday’s game at Camp Foster, Okinawa. Kubasaki routed Kadena 35-3. (Dave Ornauer / S&S)

Kubasaki Dragons running back Tim Gardner is wrestled down for a 9-yard loss by Dominique Broussard of the Kadena Panthers during Friday’s game at Camp Foster, Okinawa. Kubasaki routed Kadena 35-3. (Dave Ornauer / S&S) 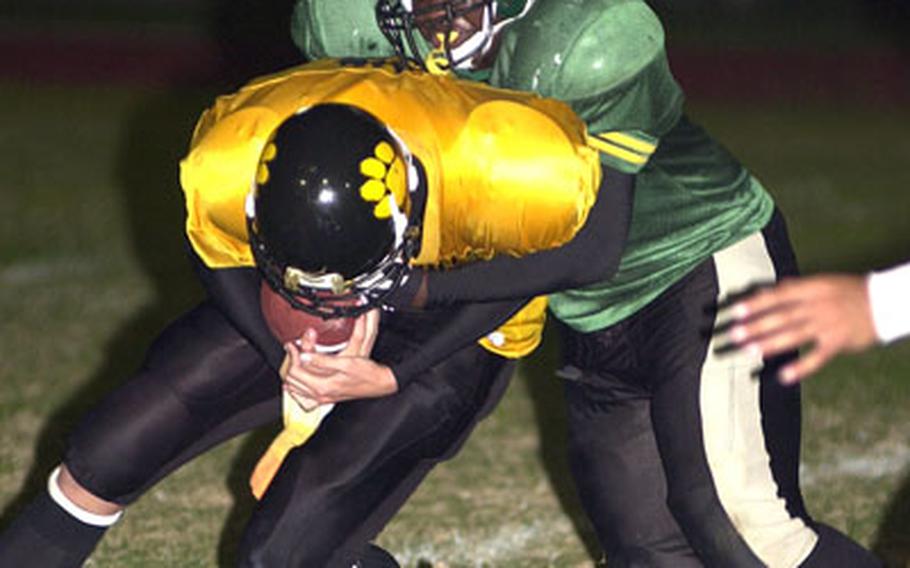 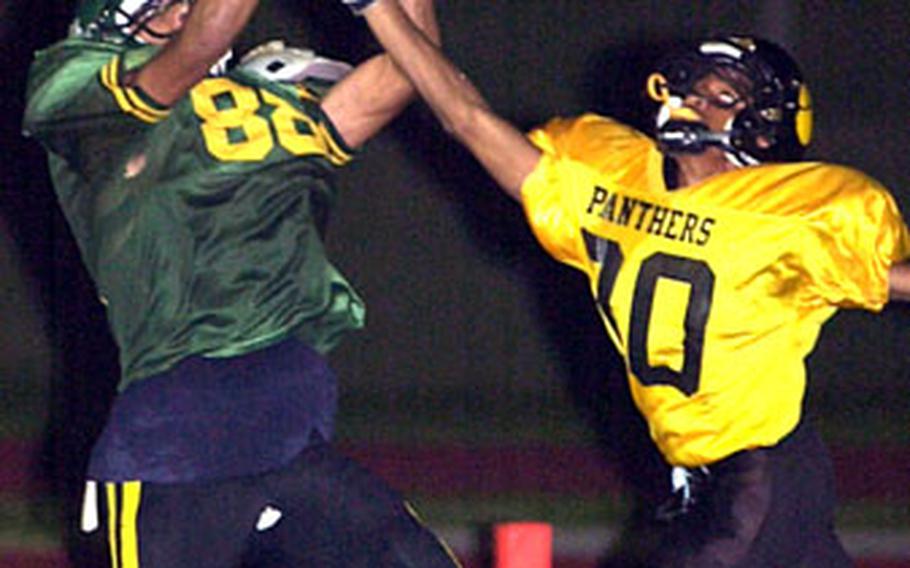 Stephen Thompson said he became &#8220;tired of losing&#8221; last fall in his first season in a Kubasaki football uniform. The senior took matters into his own hands Friday.

Thompson racked up 128 all-purpose yards and scored two touchdowns, and the Dragons scored three TDs off five Kadena fumbles in a 35-3 rout of the Panthers in the Okinawa Activities Council season opener.

Kubasaki will secure the OAC&#8217;s berth in the Far East Class AA semifinals with a victory Friday at Kadena. A victory by the Panthers will force a third game between the teams at a site to be determined. The first team to win twice will face Guam High on Nov. 5 at Guam Naval Station.

David Motu and Lenard White scored on 4-yard runs and Mew crossed the goal line on a 1-yard sneak for Kubasaki.

Mew, who had 134 yards of total offense, completed six of nine passes for 114 yards. He even had one of Kubasaki&#8217;s four quarterback sacks.

Kubasaki gained 246 yards and held Kadena to 106. Panthers junior quarterback Alex Mierzejewski was 4-for-6 for 51 yards and ran eight times for 34 yards.

Friday&#8217;s game was the first between the schools&#8217; full varsity squads since the OAC&#8217;s All-Star series was disbanded after the 2000 season. Until last season, the schools fielded split-squad teams.

Kadena dug itself a hole with three first-half turnovers that resulted in Kubasaki touchdowns. Kadena reached Kubasaki&#8217;s 6-yard line just before halftime but had to settle for senior Ted Awana&#8217;s 33-yard field goal.

Nile C. Kinnick 13, Zama American 6Abernathy continued to blossom as Kinnick&#8217;s running back, rushing 25 times for 137 yards, including a 25-yard run in the fourth quarter that broke a 6-6 tie.

Abernathy helped keep Zama&#8217;s offense off the field in the fourth quarter, gaining 57 yards in the final period.

The Red Devils preserved the victory by stopping the Trojans at Kinnick&#8217;s 3-yard line with three minutes left.

With starting quarterback Ben Bishop out with an injured shoulder, Aaron Tabor, normally a running back, filled in as Zama&#8217;s QB. Tabor helped lead a drive on the next possession that tied the score, as Steven Moore ran into the end zone from the 4-yard line.

The Trojans fell to 0-6 overall and 0-5 in the Japan Football League and Kanto Plain.

Kubasaki vs. Kadena at McDonald Stadium, Kadena Air Base, 3:30 p.m.

Kadena vs. Kubasaki, 7 p.m., if necessary