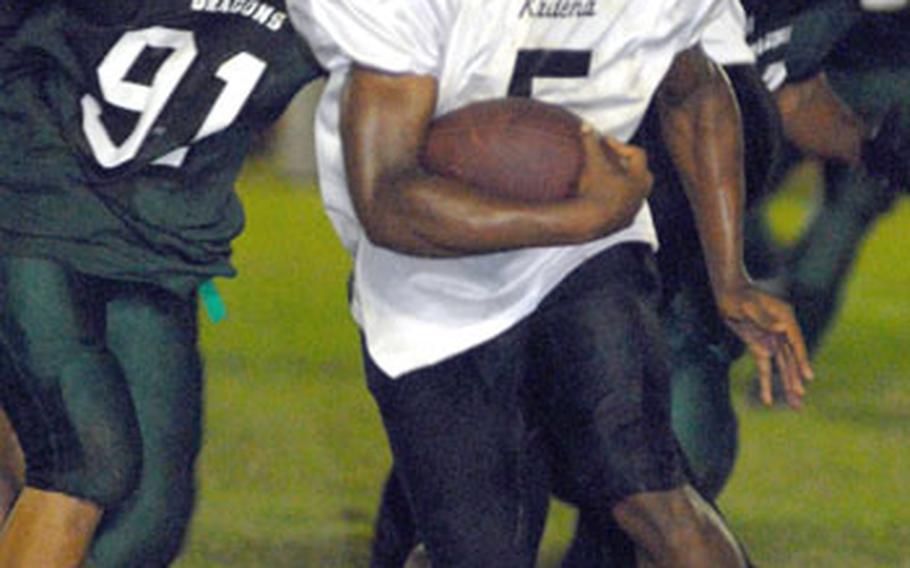 The defending Far East Class AA champions held Kubasaki to 55 yards and forced five turnovers &#8212; including interception-return touchdowns by Anthony Tarver and Brandon Harris &#8212; as the Panthers blanked the Dragons 29-0.

"We were anxious to see what we have. We had so many people to replace from last year," Mendoza said of a graduation- and transfer-depleted defense. "I&#8217;m proud of the effort. We&#8217;re not there yet, but we&#8217;re stepping in the right direction."

Quarterback Lamar Smith offered an indicator of things to come by tossing a 32-yard touchdown pass on fourth-and-11 to Stan Schrock, who leaped between two defenders for the ball on Kadena&#8217;s first possession.

Harris ran back an interception 33 yards for a score, then Aaron Ahner booted a 37-yard field goal 16 seconds before halftime. Smith hit Daren Douglas from 26 yards out and Tarver took an interception 26 yards to the house in the third quarter.

Schrock had 117 total yards and Harris 152, including 112 yards on four returns.

Less than a week after the Dragons rallied to beat nine-time Japan Football League champion Yokota 18-14, Kubasaki had no answer for Kadena&#8217;s defense.

JapanYokota 24, American School In Japan 14: At Yokota Air Base, Japan, Derick Seward tied a school record for yards in a game with 313 on 31 carries plus a touchdown. DeEric Harvin rushed for a 1-yard TD and returned the opening kickoff 90 yards for a score as the Panthers (3-1) survived a see-saw first quarter against ASIJ (2-1).

Harvin had 170 all-purpose yards for a Yokota team that ran 55 times for 442 yards. Yokota never trailed, but the Mustangs kept it tight on rushing TDs by Steve Hayman and Alex Bussom. Yokota lost three second-half fumbles, which also kept the contest close.

Robert D. Edgren 42, Zama American 0: Less than a week after a frustrating one-point home loss to ASIJ, the Eagles (3-2) righted themselves and swept the season series from the Trojans (0-4) at Misawa Air Base, Japan.

Michael Spencer was the lone bright spot for Zama, rushing 14 times for 47 yards.

GuamFather Duenas Memorial 33, Guam High 28: At Naval Station, Guam, Brian Sanders enjoyed a breakout performance in a losing cause, as the Panthers (1-3) lost another heartbreaker to the defending Interscholastic Football League champion Friars (5-0).

"This is just what the doctor ordered for us," Panthers assistant Jacob Dowdell said of the offensive performance, which came on the heels of 36-0 and 40-6 losses to George Washington and Simon Sanchez the previous two weeks.