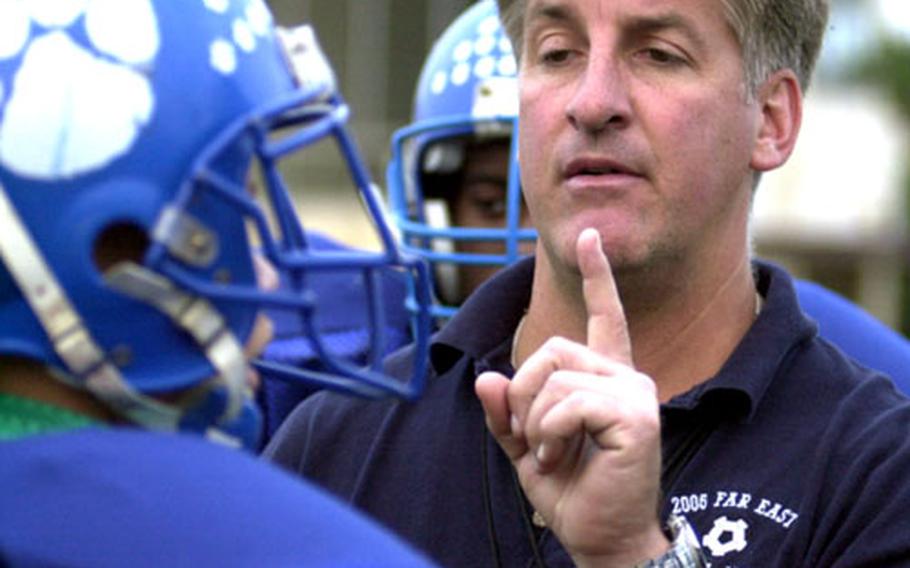 Homecoming is the highlight of most high schools&#8217; fall sports season, with pep assemblies, parades and floats, and backward-dress days capped at week&#8217;s end with the big football game, the crowning of the homecoming king and queen and the homecoming dance.

It also can be a major pain for football coaches, who must deal with distractions and players who are unavailable for practice.

&#8220;Most coaches that I know would rather that homecoming not be during football season,&#8221; said George Speer, whose Taegu American Warriors host Seoul American in Saturday&#8217;s homecoming contest.

The problem: Many players are tied up in homecoming-related activities, from crowning ceremony rehearsal to building floats. And they all seem to take place at the same time as football practice.

Guam High was first on this fall&#8217;s homecoming parade, in late September. Kubasaki of Okinawa, Seoul American and American School In Japan had theirs last week while Osan American in Korea, Zama American in Japan and Kadena of Okinawa take their turn this week, along with Yokota, which celebrates its 30th anniversary homecoming. Homecoming at Nile C. Kinnick and Robert D. Edgren of Japan are next week.

His crew spent early mornings before school in the weight room and visited Harden at lunchtime for chalk-talk sessions.

Then there are total surprises, such as at Guam High&#8217;s homecoming, derailed by a power failure. More than 1,000 fans gathered Sept. 24 at Blue Jacket Field, hot dogs and hamburgers sizzled on grills, the homecoming court was about to be crowned. Meanwhile, Navy staff civil engineers worked frantically to set up portable lights and generators. They failed to work. Guam High beat Southern 2-0 the next morning before a sparse crowd.

Kubasaki vs. Kadena at McDonald Stadium, Kadena Air Base, 3:30 p.m.

Kadena at Kubasaki, 7 p.m., if necessary

The Top Ten teams in the Stars and Stripes’ 2005 Far East high school football ratings, with records through Oct. 15, points and week’s rating, as compiled by Dave Ornauer of Stars and Stripes sports. Ratings are based primarily on teams’ win-loss records, quality of wins, strength of overall roster, point differential, team and individual statistics, strength of schedule and strength of leagues. Maximum rating is 500 points: